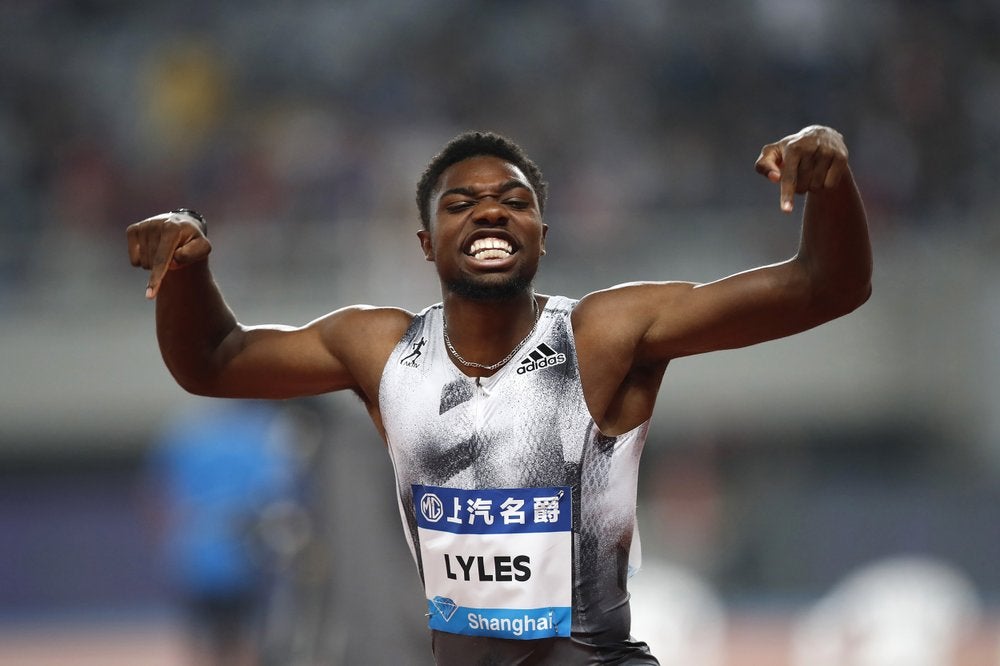 FILE – In this May 18, 2019, file photo, Noah Lyles of the United States reacts after winning the men’s 100-meter race during the Diamond League Track and Field meet in Shanghai, China. The most promising signal that track and field remains in good hands even after Usain Bolt’s retirement comes from a 22-year-old American named Noah Lyles who appreciates the Jamaican superstar more for what he did after his races than during them. When Lyles spends time studying Bolt on video, he looks not at the lanky speedster’s form in between the lines, but at the dancing, rollicking post-race celebrations Bolt concocted to make his sport can’t-miss viewing whenever he was on the track. (AP Photo/File)

The most promising signal that track and field remains in good hands even after Usain Bolt’s retirement comes from a 22-year-old American named Noah Lyles, who appreciates the Jamaican superstar more for what he did after his races than during them.

When Lyles spends time studying Bolt on video, he’s not only looking at the lanky speedster’s form in between the lanes, but at the dancing, rollicking post-race celebrations Bolt concocted to make his sport can’t-miss viewing whenever he was on the track.

“I saw more of his fun-loving side and liked that more than I liked actually watching him run,” Lyles said in a recent interview as he prepares for the world championships that begin next weekend in Doha, Qatar. “I was interested in what was his way of making people want to watch the sport. And that’s what I believe I took the most from.”

The next two years will be daunting for track and field, as it tries to regain — or retain — its niche in the post-Bolt landscape. This week marks the beginning of the first world championships without Bolt since 2003. In less than a year, track will take its act to the Olympics, sans Bolt, for the first time since 2000.

Lyles knows there will be comparisons. Two months ago, he ran 19.50 in the 200 meters, the distance Bolt considered his specialty and at which he holds a world record — 19.19 seconds — that many in the sport feel will be hardest to top.

But Lyles, the charismatic sprinter — sound familiar? — who grew up in Florida before moving to Virginia, isn’t daunted by that.

And while Lyles will be trying for three gold medals at next year’s Tokyo Olympics — in the 100, 200 and 4×100 relay, a la Bolt — he’s focusing solely on the 200 at world championships, because, in his words, “I have a very strong chance of winning that 200. I also have a very strong chance of trying to break some meet records.” (Bolt’s world record was set at world championships in 2009).

If he does, then the track world will certainly want to scoop up every little tidbit it can about its newest, fastest man.

Lyles is an apparel designer (check out his socks collection) and a budding musician who produced a hip-hop album that focuses on the cycle teenagers go through in acting out. He considers himself a cross between Kendrick Lamar, Travis Scott, Kanye West and Jaden Smith.

“I’m still trying to find my own flow,” Lyles said.

Whether it was on the track, or on the dance floor, or spinning records at his own dance club in Kingston, few were able to make the switch between the athletic field and the nightclub as seamlessly as Bolt. In fact, sometimes they felt like one and the same.

Though the comparisons are sure to come in all these venues, the 5-foot-11 Lyles believes there’s a benefit to never having lined up, mano a mano, against the 6-foot-5 Jamaican.

“It helps my career being able to say that I wasn’t beaten by Bolt,” said Lyles, who along with his younger brother, Josephus, signed a long-term deal with Adidas in 2016, passing on a chance to run at the University of Florida. “If I (had been), then I would have that overwhelming gloom of, ‘Oh, but you got beat by Bolt that one time.’ And then you’d have that conversation of, ‘Oh, but I was only 19.’”

They did meet once — in a doctor’s office in Germany before the 2017 world championships. Lyles, who was there to get his hamstring checked out, went over Bolt in the waiting area and introduced himself.

Could those records someday belong to Lyles? And if they do, could he be the sort of personality who would make people want to watch?

“He’s got the personality, has a lot of talent and likes to train. He’s got a few good qualities right there.”

He certainly stands out in a crowd — spraying his hair silver will tend to do that (he did that for U.S. championships and plans to again in Doha).

He certainly can dance, too, breaking out a few moves after winning at nationals. Then, he posed for pictures with fans. He was in no hurry to leave the stage.

“Noah’s a rock star,” said Justin Gatlin, the reigning 100-meter world champion. “He likes to put on a show.”

In short, Lyles gets it: Lots of people run fast. But Bolt’s celebrations are what made the victories so memorable.

“I could be the fastest and I could have the most medals, but are they going to remember that when I leave? Probably not,” Lyles said. “Because somebody else is going to come by and do the same thing. But everybody will remember Bolt’s personality.”