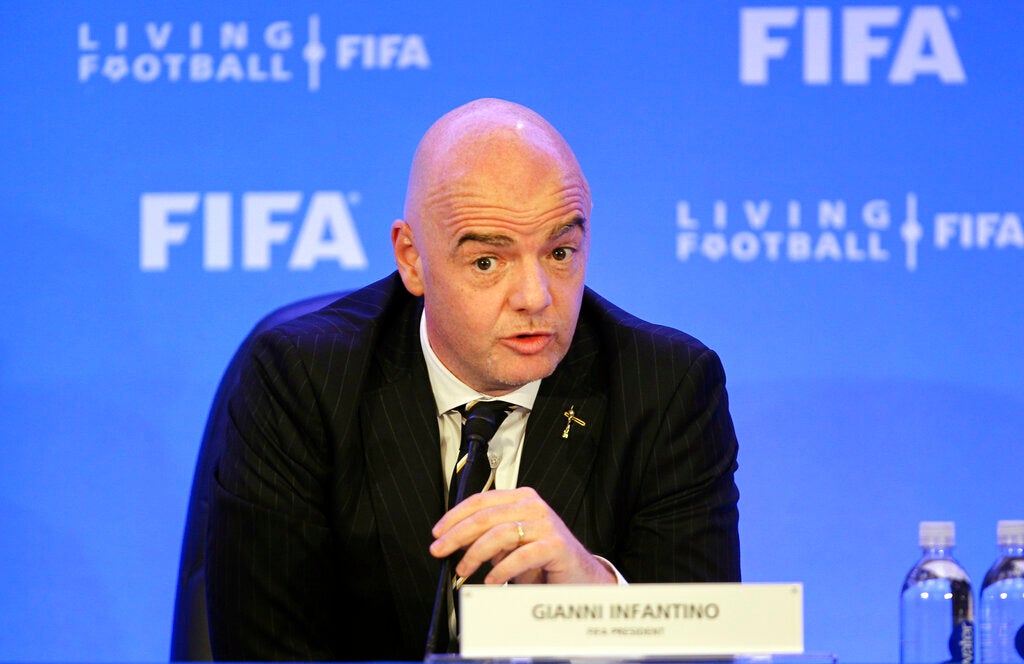 FIFA President Gianni Infantino talks during a press conference after the FIFA Council Meeting, Friday, March 15, 2019, in Miami. The council approved working with Qatar to explore expanding the 2022 World Cup to 48 teams by adding at least one more country in the Persian Gulf to host matches. (AP Photo/Luis M. Alvarez)

A 2-2 draw between Atalanta and Fiorentina on Sunday was suspended briefly during the first half due to racist chants.

The referee ordered a warning to be read over the stadium’s loudspeaker after the chants were apparently made by Atalanta fans toward Fiorentina fullback Dalbert Henrique, a Brazilian player who is black.

Toward the half-hour mark, Dalbert stopped and glared at the direction where the chants appeared to come from, and he then spoke to the referee.

The address over the loudspeaker, warning that the match would not resume until the chants stopped, was met with whistles from the crowd.

Once the crowd calmed down, the match resumed after a break of several minutes.

Inter Milan’s Romelu Lukaku and AC Milan’s Franck Kessie have also been targeted this season but no club has been punished by the league judge.

“Racism is combatted with education, condemnation and discussion,” Infantino, head of world soccer’s governing body FIFA, said on Italian state TV RAI. “You can’t have racism in society or in football. In Italy the situation has not improved and this is very serious. You need to identify those responsible and throw them out of the stadiums. You need, as in England, the certainty of the penalty. You can’t be afraid to condemn racists, we need to combat them until they stop.”

Atalanta fans have been accused of racism before.

Coaches of both clubs Sunday vehemently insisted that they didn’t hear any offensive chants.

“I really didn’t hear these chants. I didn’t ask (Dalbert) anything either,” Fiorentina coach Vincenzo Montella said. “I didn’t hear, to be honest, no.”

Montella was then asked if he condemned the incident.

“Come on, just because two people say something. … In every game I am on the receiving end of these things because I am from Naples,” Montella said, referring to territorial chants, which are also a problem in Italy. “What should I do? My answer is to always thank them for reminding me (that I am from Naples). What should I do?”

Atalanta coach Gian Piero Gasperini added, “I didn’t hear any chant, at least from where we were nobody heard anything. I even asked (Vincenzo) Montella if (he had heard something). Then, if a couple of idiots who were on the other side (of the stadium) said something to Dalbert, OK. But then again do you know how many and serious insults from individuals there are in all the stadiums, Florence included, when you play there? I don’t think they were chants. … chants are something else.

“We have to be careful with these things, because obviously we have to absolutely condemn any form of racism, but we can’t start checking if some individual insults. They were not chants. We didn’t hear any chant,” Gasperini said. “Let’s avoid doing things like this because instead of having a positive effect, which would be right when there are actual chants, we have an exaggeration and I think this was the case today.”

Atalanta, which is based in Bergamo, is playing in Parma while its stadium is being renovated.