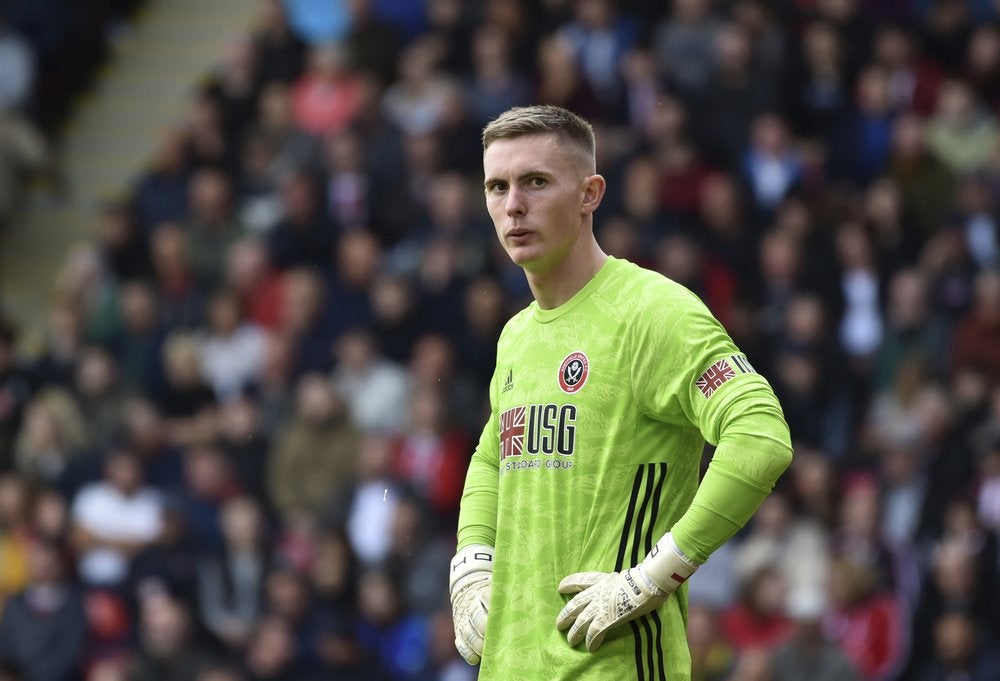 It was a day of goalkeeping blunders in the English Premier League.

Liverpool and Manchester City, seemingly set for another duel for the title, benefited from two of them in hard-fought away wins on Saturday.

Liverpool eked out a 1-0 victory at Sheffield United but only after home goalkeeper Dean Henderson let a volley from the edge of the area by Georginio Wijnaldum slip through his arms and legs in the 70th minute.

That’s seven straight wins to open the campaign for Liverpool, and 16 in a row in the league stretching back to March. Two more and the Reds will equal the top-flight record set by City in 2017.

City, meanwhile, was drawing 1-1 against Everton and dipping below its usual high level when Riyad Mahrez took aim with a free kick in the 72nd minute. Goalkeeper Jordan Pickford should have had it covered but the ball went under his hand and crept inside the far post, before Raheem Sterling wrapped up a 3-1 win with a late goal.

The gap between Liverpool and second-place City stayed at five points. West Ham, in third spot, is a further four points adrift.

Capping a forgettable day for goalkeepers, Tottenham’s Hugo Lloris was dispossessed near his own line to concede a goal against Southampton. His teammates rescued him by winning 2-1 despite playing with 10 men for an hour, lifting the side to fourth.

Neither Liverpool nor City was at their fluent best, but still found ways to win. It is not yet October and they are already pulling clear of the rest.

Liverpool, in particular, was put off its game by the intensity and work rate of Sheffield United before Henderson’s mistake cost the promoted side. Henderson is on loan from Man United, traditionally Liverpool’s fiercest rival.

It was just a second clean sheet in the league for Liverpool, which kept a league-high 21 last season.

City never reached those heights against Everton, though Kevin De Bruyne excelled once again, collecting his eighth assist in the league with a curling cross headed home by Gabriel Jesus.

“They are on an incredible run,” City manager Pep Guardiola said of Liverpool. “They don’t drop points and they win well. We know it, the players know it. It is not easy.”

Lloris’ mistake was probably the worst of the day.

The France captain collected the ball near his line, dithered and tried to beat Southampton striker Danny Ings with a deft turn. Ings dispossessed Lloris and the ball rolled into the net, leaving the score 1-1 after Tanguy Ndombele’s early goal.

By that stage, Tottenham was also a man down after the 31st-minute red card to Serge Aurier for two bookings but Mauricio Pochettino’s team still prevailed, Harry Kane finishing a flowing move in the 43rd to make it 2-1.

Spurs have had a difficult start to the season — losing on penalties to fourth-tier Colchester in the League Cup in midweek — but they are still in the Champions League places.

Doing even better than Tottenham, somewhat surprisingly, is West Ham.

A 2-2 draw at Bournemouth, earned by left back Aaron Cresswell’s 74th-minute equalizer, lifted West Ham to third. The London team’s only loss came on the opening weekend, a 5-0 hammering by Man City.

It was Cresswell’s second goal in as many games. He also curled in a free kick in a win against Manchester United last weekend.

Chelsea finally kept a clean sheet this season, and it earned Frank Lampard a first home win in the league since his return as manager.

Jorginho converted a penalty and Willian scored with a deflected shot as Chelsea beat Brighton 2-0 with both goals coming in the second half.

It was the ninth straight league loss for Brighton against Chelsea — an English record run for most games played, and lost, against one opponent.

Lampard had two draws and a loss in his first three league games at home following his return to Chelsea, where he is the all-time top scorer.

Watford will head into October still without a league win.

Wolverhampton Wanderers consigned Watford to a fifth loss in seven games by winning 2-0 at Molineux thanks to an effort from Matt Doherty and an own-goal by Daryl Janmaat.

Watford has two points and was on the end of an 8-0 thrashing by Man City last weekend.

In the other two games, Burnley equalized twice in a 2-2 draw at Aston Villa, and Crystal Palace won 2-0 at home to Norwich.