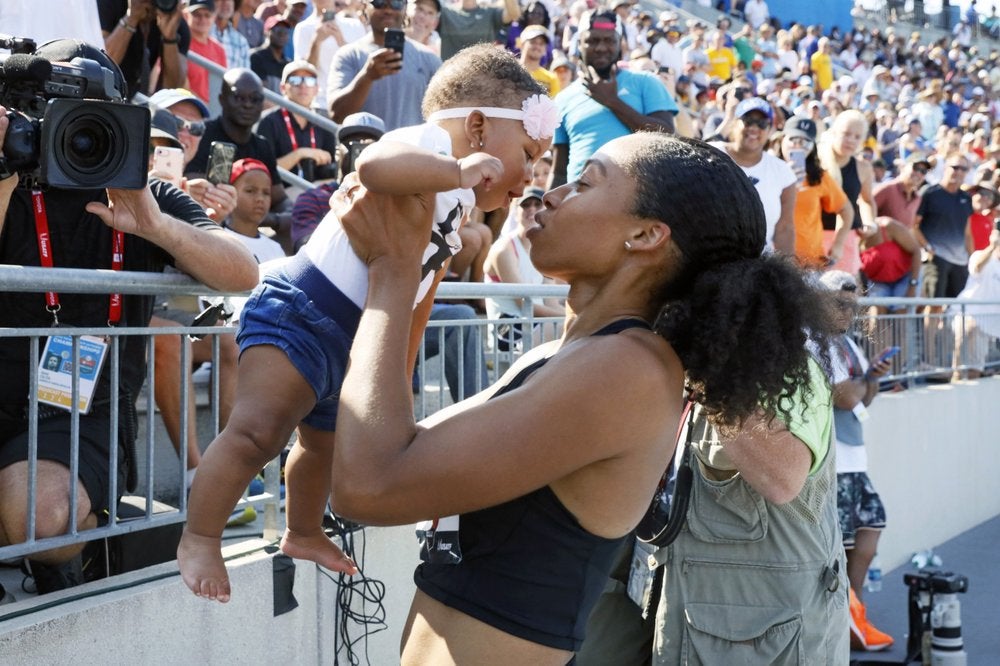 FILE – In this July 27, 2019, file photo, Allyson Felix holds her daughter Camryn after running the women’s 400-meter dash final at the U.S. Championships athletics meet in Des Moines, Iowa. A rebellion led by some of the sport’s top runners, Allyson Felix, Kara Goucher and Alysia Montano, is helping change that, and two months after the U.S. women’s soccer players stated their case for equal pay, women in athletics are finding footing on an equally important crusade. “I feel like (my voice has been heard), and I feel like that only because of women coming together,” Felix said in an interview with The Associated Press. (AP Photo/Charlie Neibergall, File)

DOHA, Qatar — For decades, the message to women in track and field was crystal clear: get pregnant, lose sponsorship money.

A rebellion led by some of the sport’s top runners, Allyson Felix, Kara Goucher and Alysia Montano, is helping to change that.

Two months after the U.S. women’s soccer players stated their case for equal pay, women in track and field come to their major event, the world championships in Doha, having found their footing on another important crusade — retaining full pay from their sponsorship deals after they get pregnant.

“It’s the power of the collective,” Felix said in an interview with The Associated Press. “Alysia speaking, Kara speaking, the women’s soccer team. It’s just such a pivotal time right now in women’s sports, and we’re seeing change happen.”

The six-time Olympic and 11-time world champion had a baby girl in November and will compete on the women’s relay team next week at the worlds in Doha, where she will have a new apparel sponsor, Athleta, after spending years with Nike.

Nike responded to the outcry, as well, announcing in May that it would not apply performance-related pay reductions for pregnant athletes for a consecutive period of 12 months. Then, last month, the company expanded that to 18 months — starting eight months before the due date — and pledged to include specific language about pregnancy in its contracts to reinforce the policy.

“We recognize we can do more and that there is an important opportunity for the sports industry to evolve to support female athletes,” Nike said in a statement.

The fights for women’s rights in soccer and track have taken different trajectories and centered on different issues, but both had been underway for several years before they came to a head this summer.

The members of the U.S. women’s soccer team, with Megan Rapinoe spearheading the move, brought their longstanding struggle for equal pay to the fore during their march to the World Cup title this summer.

At issue is the difference in the collectively bargained pay structures between the U.S. men’s and women’s teams, which for decades has left the women making less per game.

The women’s team filed a gender discrimination lawsuit in March, and in the aftermath of its victory in the World Cup, momentum has been building for a revisiting of the pay gap, including a bill in Congress that would ensure equal pay for athletes who represent the United States in global competitions.

Track and field hasn’t dealt with as many equal-pay issues, in part because men and women compete at the same time at the same venue, so there’s never been an accurate way to measure attendance and viewership for one gender over the other.

The women’s side of the sport has long produced as much talent and star power as the men: Felix, Sanya Richards-Ross, Marion Jones, Jackie Joyner-Kersee, and the list goes on. Meanwhile, USA Track and Field has established a pay system based on merit and potential that pays men and women equally.

“I understand the discrepancies in other sports, and exposure and differences in that sort of thing,” said agent Paul Doyle, who represents a number of track athletes, including hurdler Nia Ali, a mother of two. But in track and field, “this is the same exposure. Diamond League meets have just as many female events as male events. It’s as interesting a sport as the men’s sport.”

But, as the world found out this year, the conversation changes when it comes to endorsement contracts in a sport in which an increasing number of female athletes are putting careers on hold to have babies, then returning to compete at a high level.

In May, Montano, the six-time U.S. champion who famously raced while she was eight months pregnant, broke nondisclosure agreements with Nike to produce a video describing the reality of being a woman in track and field.

“The sports industry allows for men to have a full career, and when a woman decides to have a baby, it pushes women out at their prime,” she said. “When I told (Nike) I wanted to have a baby during my career, they said, ‘Simple, we’ll just pause your contract and stop paying you.’”

Montano is five months pregnant with her third child and now has a sponsorship deal with an active wear company, Cadenshae, which has vowed to support her regardless of whether she returns to the track.

Her message led Felix and Goucher to both go public with their stories, as well.

In a New York Times opinion piece, Felix recounted how Nike “wanted to pay me 70% less than before.” She eventually helped push the company to change the way it deals with pregnant athletes. When Nike revised its contracts, she celebrated.

“This means that female athletes will no longer be financially penalized for having a child,” Felix wrote on Instagram.

Goucher also participated in the op-ed, describing the pressure she felt from Nike to go back to training instead of caring for her newborn son, Colt. Despite Nike’s changes, Goucher now lists Altra as her shoe sponsor.

While Goucher and Montano will not compete in Doha this week, Felix will be there, and she won’t be the only mother on the track.

Ali, the 2016 Olympic silver medalist in the 100 hurdles, will be there. Two-time Olympic sprint champion Shelly-Ann Fraser-Pryce of Jamaica is a mom. Marathoner Roberta Groner has three kids.

Joanna Hayes, the 2004 Olympic gold medalist, now coaches 20-year-old hurdler Sydney McLaughlin. Nine years ago, Hayes put her career on hold to have a baby, then “came back on a whim, just to have fun, and I ran OK.” But nearly a decade later, the issue is resonating much more widely, and not only on the track and the soccer pitch.

“We’re going to see a big difference,” Hayes said. “You hear stories about this in corporate America — so many things that women go through just to have children, and so I think it’s just great to see women standing together for a cause.”