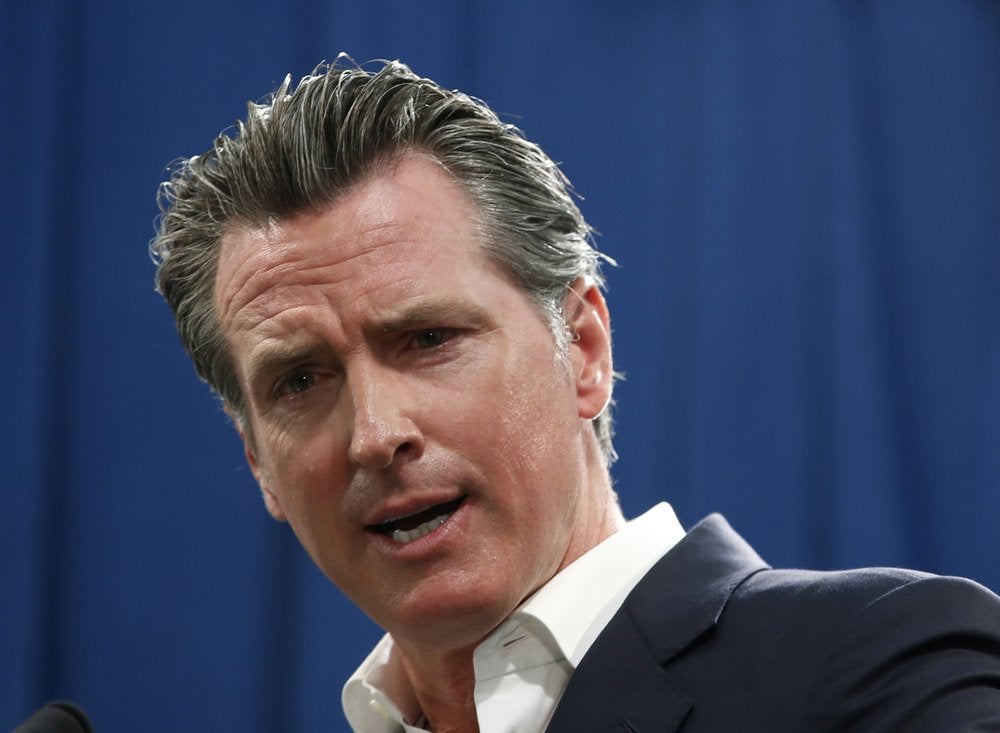 FILE – In this Sept. 16, 2019, file photo, Gov. Gavin Newsom answers a question during a news conference in Sacramento, Calif. Newsom announced Monday, Sept. 30, he signed a law that would let athletes at California universities make money from their images, names or likenesses. The law also bans schools from kicking athletes off the team if they get paid. (AP Photo/Rich Pedroncelli, File)

SACRAMENTO, Calif. — Defying the NCAA, California’s governor signed a first-in-the-nation law Monday that will let college athletes hire agents and make money from endorsements — a move that could upend amateur sports in the U.S. and trigger a legal challenge.

Under the law, which takes effect in 2023, students at public and private universities in the state will be allowed to sign deals with sneaker companies, soft drink makers or other advertisers and profit from their images, names or likenesses, just like the pros.

“It’s going to change college sports for the better by having now the interest, finally, of the athletes on par with the interests of the institutions,” Democratic Gov. Gavin Newsom said in a tweeted video. “Now we’re rebalancing that power arrangement.”

He predicted other states will introduce similar legislation. Two lawmakers in South Carolina have already announced plans to do so.

The new law applies to all sports, though the big money to be made is in football and basketball. It bars schools from kicking athletes off the team if they get paid. It does not apply to community colleges and prohibits athletes from accepting endorsement deals that conflict with their schools’ existing contracts.

The NCAA, which had asked Newsom to veto the bill, responded by saying it will consider its “next steps” while also moving forward with “efforts to make adjustments to NCAA name, image and likeness rules that are both realistic in modern society and tied to higher education.”

The NCAA, which has 1,100 member schools and claims nearly a half-million athletes, said that “changes are needed to continue to support student-athletes,” but that such changes must be done at a national level through the NCAA, not through a patchwork of state laws.

Before the governor signed the bill, the NCAA cautioned that the law would give California universities an unfair recruiting advantage, which could prompt the athletic association to bar them from competition.

But while the NCAA is the top governing body for college sports, membership is voluntary. If the California schools are forced out, they could form a new league.

Professional athletes have endorsed the law, including NBA superstar LeBron James, whose 14-year-old son is a closely watched basketball prospect in Los Angeles and will be 18 when the measure takes effect.

On Instagram, James exulted over the signing of the law, saying it will “change the lives for countless athletes who deserve it!”

He added: “NCAA, you got the next move. We can solve this for everyone!

“For decades, college sports has generated billions for all involved except the very people most responsible for creating the wealth. That’s wrong,” she said.

Newsom likewise portrayed the law as righting a wrong.

“Other college students with a talent, whether it be literature, music, or technological innovation, can monetize their skill and hard work,” he said. “Student athletes, however, are prohibited from being compensated while their respective colleges and universities make millions, often at great risk to athletes’ health, academics, and professional careers.”

The NCAA has steadfastly refused to pay players in most cases. But a committee led by Ohio State Athletic Director Gene Smith and Big East Commissioner Val Ackerman is studying other ways players could make money. Its report is expected in October.

The NCAA does let some athletes accept money in some instances. Tennis players can accept up to $10,000 in prize money per year, and Olympians can accept winnings from their competitions. Plus, schools in the big “Power 5” conferences can pay players yearly cost-of-living stipends of between $2,000 and $4,000.