Track and field: A world record, and a win for the home team 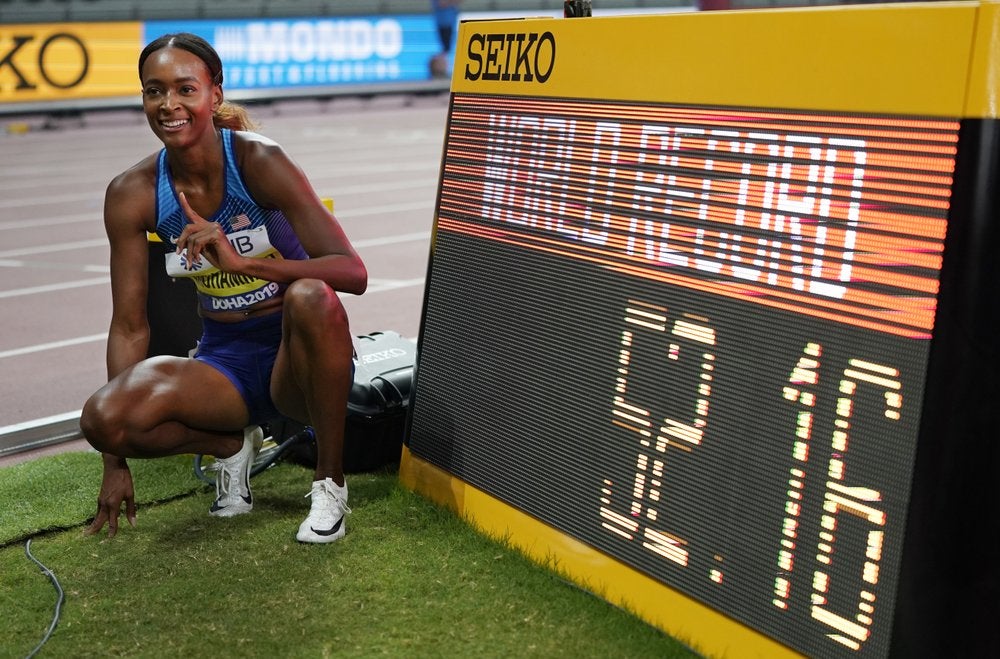 Dalilah Muhammad, of the United States, poses for a photo with the clock after winning the women’s 400 meter hurdles final, setting a new world record at the World Athletics Championships in Doha, Qatar, Friday, Oct. 4, 2019. (AP Photo/David J. Phillip)

DOHA, Qatar — The message American hurdler Dalilah Muhammad kept telling herself when her career was running into roadblocks: Why not me?

The message Qatari high jumper Mutaz Essa Barshim kept receiving from an adoring home crowd yearning to celebrate a champion: We love you!

On a thrill-filled night at the track and field world championships Friday, Muhammad answered her own question — again — by setting her second world record in 10 weeks, while Barshim loved everyone back by becoming a repeat world champion, winning this one on home turf.

“I’ve won a lot of gold medals, but this one is home,” Barshim said. “It feels different. I just felt love.”

The late-blooming, 29-year-old Muhammad smoothed her way through the 400-meter hurdles in 52.16 to break, by .04 seconds, the world record she had set at U.S. national championships in July.

Both she and Barshim — they call him “The Qatari Falcon” — will head into the Tokyo Games next year as reigning world champions. Muhammad will also go in as the defending Olympic champ — and almost certainly as the world record holder, too.

“I didn’t even know who won the race,” Muhammad said. “I was looking to see who won, and then I noticed, when they said ‘world record,’ that I had broken it.”

Simply winning the race has become more difficult because of the rapid rise of Sydney McLaughlin, the 20-year-old phenom who juggles, rides a unicycle and seems destined to win a gold medal one day.

McLaughlin also finished second to Muhammad at nationals — but that one was by .68 seconds. This one was by .07, and her time of 52.23 would have been the world record had she run it 10 weeks ago.

“We came into this season knowing who the main opponent was going to be,” said McLaughlin’s coach, Olympic gold medalist Joanna Hayes. “It’s not a surprise. Dalilah has experience over Syd, so all I wanted her to do was get some experience. And run her best. And she’s surpassed that.”

How close did Muhammad come to missing out on this? Shortly after graduating from Southern California in 2012, she went to Olympic trials and completely flopped. Out in the first round, she had neither a spot at the London Games nor a sponsor.

Things changed: She won nationals in 2013, then a silver medal at worlds. Then they changed again: She faltered in 2015 and watched those world championships from home.

″“I had an epiphany one day, “Why not me?’” Muhammad said. Now, she has an Olympic title and a world championship.

She barely broke stride in clearing the 10 hurdles. It was, she said, much closer to the perfect race that she decidedly did not think she had run at national championships in the rain, in Des Moines, Iowa.

And yet, this race still came down to a lean at the line against an opponent who’s only getting better.

“Next year’s going to be amazing,” Hayes said.

Close as the race was, though, the men’s steeplechase was even closer.

Conseslus Kipruto and Lamecha Grima rambled over barriers and through the water over 3,000 meters, and as they approached the finish, there was nothing separating them. With fans in the jam-packed crowd screaming, they sprawled as they reached the line. A photo finish showed Kipruto had crossed in 8 minutes, 1.35 seconds. That was one-hundredth of a second faster than Grima.

“I was praying, ‘Let me be faster than him,‘” Kipruto said. “I waited. I prayed. I saw the screen and saw it said ‘Conseslus.’ It was my name. I was definitely happy.”

In the men’s 400 meters, Steven Gardiner of the Bahamas won gold over Anthony Zambrano of Colombia and American Fred Kerley. Finishing 1-2 in the discus were Cubans Yaime Perez and Denia Caballero, who ran to the stands to share hugs with their small group of fans.

But no win brought more joy throughout the stadium than Barshim’s.

He brought the fans out of their seats every time he cleared a height, and not long after it was over, he was sharing a hug with the ruling emir of his country, talking about how Qatar’s first gold medal of these championships was won.

Much has been made about the heat and poor attendance, the efficacy of air-conditioned stadiums and the legitimacy of the bid process that brought not only these championships, but the 2022 World Cup, to a country that’s striving to raise its profile beyond that of a mere oil supplier.

For one night, at least, Barshim’s victory set all that aside. Qatar looked like a sports country, and nothing could ruin that — not even the fact that the sound system malfunctioned at the end of the evening, thus postponing Barshim’s medal ceremony to Saturday night.

“I did it for them,” Barshim said of his fans and countrymen. “They’re the champions tonight.”

She’ll get her gold medal Saturday, as well, but for her, there was one last bit of business to take care of before leaving the track Friday night.

While the other seven hurdlers were writhing on the ground after crossing the finish line, Muhammad took a few deep breaths, then straightened up and headed over to the time clock near the finish line to have her picture taken.

It’s what world record holders do.

“I don’t think you ever get used to it,” Muhammad said. “But if I want to stay competitive in this event, I have no choice.”