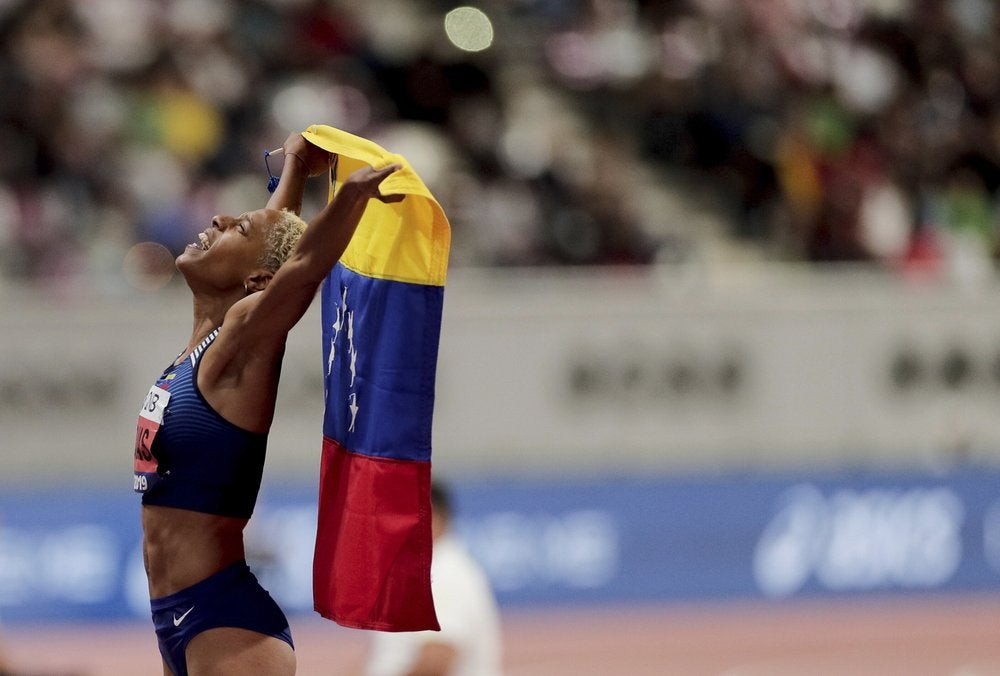 DOHA, Qatar — After winning a gold medal for Venezuela at the track and field world championships, Yulimar Rojas has two goals.

She wants the world record. And she wants to inspire youngsters back home in politically unstable Venezuela.

Rojas retained the world triple jump title with a mark of 15.37 meters Saturday. That was a full 45 centimeters ahead of her closest rival, Jamaica’s Shanieka Ricketts, but 13cm short of the world record she covets, set by Ukrainian Inessa Kravets in 1995.

“The world record, as I always say, is something that I really want to achieve,” the 23-year-old said through a translator. “I was very close this year but I’m still young and I have a long way ahead of me, so I’m going to work really hard next year to achieve the world record.”

Rojas was exuberant in her celebrations, skipping on the spot while wearing the Venezuelan flag. Her win comes in a tough year for Venezuelans, who have experienced political violence, food shortages and hyperinflation. Thousands of people each day have left the country.

“I’m working hard to represent my country and making it proud,” she said when asked if the instability affected her ability to compete. “I got this medal and it inspires the whole country and the next generation.”

Saturday’s final was another illustration of how deeply women’s triple jumping has taken hold in South America.

No other women’s event at these championships has yet had a South American medalist, but this had two.

“It’s really pride for the American continent,” Rojas said. “It’s really emotional that we represented America really well, with three countries from America in these championships that won the medals. This was competition was really tough and I was really proud that the triple jump is here for America.”

Three years after she beat Rojas to Olympic gold, Colombia’s Caterine Ibarguen took the bronze despite injuries disrupting her preparations and forcing her to miss August’s Pan-American Games.

“It was really hard but I made it to the podium so I’m really happy that I made my country proud,” she said through a translator. Ibarguen and Rojas are on track to battle for the win again at next year’s Olympics in Tokyo.