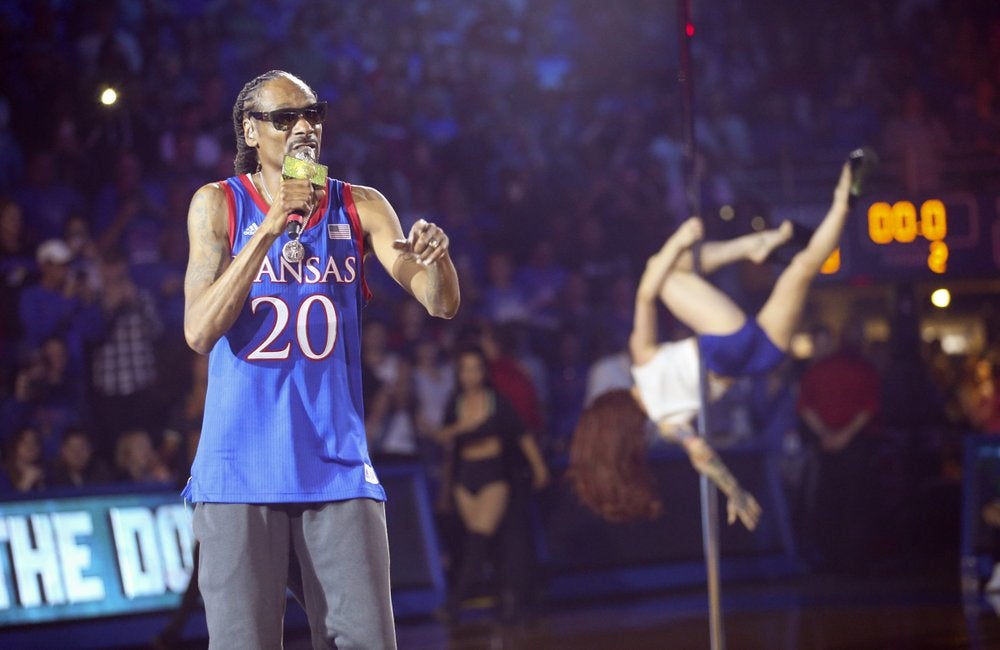 LAWRENCE, Kan. — The University of Kansas apologized for its risque Late Night at the Phog event in which rapper Snoop Dogg performed, stripper poles were wheeled onto the Allen Fieldhouse floor and fake money was shot over the heads of prospective recruits.

The Jayhawks instead got an R-rated performance for their annual basketball kickoff and another big headache as they deal with a high-level NCAA infractions case tied to recruiting.

“We made it clear to the entertainers’ managers that we expected a clean version of the show and took additional steps to communicate to our fans, including moving the artist to the final act of the evening, to ensure that no basketball activities would be missed if anyone did not want to stay for his show,” Long said in a statement. “I take full responsibility for not thoroughly vetting all the details of the performance and offer my personal apology to those who were offended.

“We strive to create a family atmosphere at Kansas and fell short of that this evening.”

Kansas has been putting on Late Night for 35 years, but what began as a scrimmage to celebrate the start of basketball practices has turned into a night of skits, music and entertainment.

None of them brought the cache of Snoop, though. The 47-year-old rapper and well-known sports fan was expected to take the minds of players, fans and recruits off the specter of the NCAA investigation and turn attention fully to a season in which the Jayhawks are expected to be title contenders.

The school even promoted his appearance with a social media video of Hall of Fame coach Bill Self wearing a gaudy chain and Adidas shirt — the focus of the NCAA inquiry has been on the apparel company’s dealings with recruits, including whether officials paid them to steer them to its schools.

Wearing a No. 20 jersey with “Snoop” on the back, the artist performed for about 35 minutes to a full house that included the men’s and women’s basketball teams. But he wound up singing unedited versions of several hits, such as “Gin and Juice” and “Drop It Like It’s Hot,” as pole dancers performed and fake $100 bills featuring the rapper’s face were shot over players and recruits.

Self said he wasn’t feeling well and spent most of the performance in the locker room. He later told The Kansas City Star he expected a “radio edited” version of the songs.

“I don’t guess you have visuals on radio. I learned that tonight,” Self told The Star. “That’s not the direction anybody at our school would want that to go at all, regardless of any entertainment that it provided many, it was still not the right way to provide the entertainment.”

Especially given the controversy already surrounding the tradition-rich program.

The school received a notice from the NCAA late last month alleging three severe violations tied to recruiting and a responsibility charge leveled against Self. Also cited is a lack of institutional control within the program.

The document does not detail what Kansas is accused of doing. The program is among the most prominent in an NCAA inquiry into a pay-for-play scheme that began with an FBI investigation into the apparel company Adidas.

A former employee for the company later testified that he made payments to the family of one Kansas recruit and the guardian of a current player, and text messages presented in court revealed a close relationship between Self and the Adidas employee.

The school has said it will appeal and “strongly disagrees” with the assertion it lacks institutional control.

Kansas will be allowed to present its case at a hearing. The NCAA will then rule, often within several months, and the school has the right to appeal.

North Carolina State also has received a notice of allegations. Arizona, Auburn, Creighton, Louisville, LSU and Southern California are among those under the NCAA microscope.