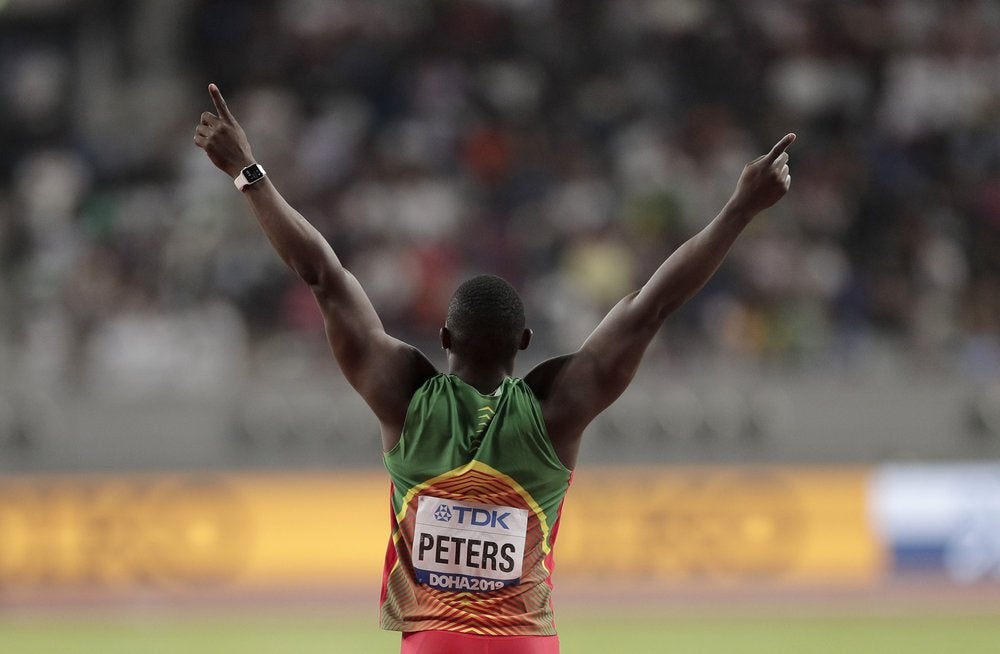 Anderson Peters, of Grenada reacts on his way to winning the gold medal in the men’s javelin throw final at the World Athletics Championships in Doha, Qatar, Sunday, Oct. 6, 2019. (AP Photo/Nariman El-Mofty)

DOHA, Qatar — As a kid, Grenadian javelin thrower Anderson Peters would hurl sticks at mangoes and apples to get them to fall to the ground.

He had the best arm of all his friends. He showed it off on an even bigger stage.

Peters won the javelin throw Sunday night for his country’s second-ever gold medal at the world championships. He joins the ranks of sprinter Kirani James, the sprinter who captured the 400-meter title in 2011. Peters remembers being glued to his television that day — and being inspired.

“That was an unbelievable moment for our whole country,” Peters said. “If he can do it, it’s possible for everybody to have a chance to become a world champion.”

A junior at Mississippi State, Peters’ winning throw was 86.89 meters as he added another title to the NCAA championships crown he won in June and Pan-Am Games win in August. Magnus Kirt of Estonia was second (86.21) and Johannes Vetter of Germany was third (85.37).

“There are no words to explain being a world champion,” Peters said. “I’m grateful for the chance.”

Growing up, he had two ambitions — be a famous cricket player or the next Usain Bolt.

But the javelin became his calling when on his first try at an event in primary school he broke the school record. All those days of throwing rocks and sticks at fruit in the trees in Grenada keeps paying off.

“We used to have races and say, ‘Let’s see who could pick the most,’” Peters said. “I was pretty good.”

Peters has to hurry back to school — he has two big tests this week.

Any chance his gold medal might help him buy some extra time with his professors?

“That’s not going to help,” Peters said, laughing. “As a kid, I was thinking about becoming a world champion and an Olympic champion and having the titles at the same time.”

One down, one to go next summer at the Tokyo Games.

Oregon Gov. Kate Brown was in the stadium to present the men’s 4×100 relay medals.

In two years, the renovated Hayward Field in Eugene, Oregon, will be the site of worlds. It marks the first time the championships are heading to the U.S.

“We’re absolutely honored,” Brown said. “It’s amazing it’s going to be in the heart of track and field territory — Eugene, Oregon. We’re excited to see everyone there.”

Three steps on the podium, but only two teams. A chaotic changeover in the women’s 4×400 relay led to more than an hour of uncertainty.

Jamaica finished third, then was disqualified, then reinstated. After all that, the Jamaican squad didn’t turn up for its medal ceremony, leaving the gold medalists from the U.S. and second-placed Poland to take a lopsided podium photo.

At issue was whether Jamaica had gained an advantage by not lining up correctly for a changeover. Fourth-placed Britain argued the Jamaicans had benefited, but that was later overturned on an appeal by Jamaica.

American distance runner Matthew Centrowitz said leaving Alberto Salazar’s training group last season had nothing to do with an investigation and more to do with needing a change.

Salazar was kicked out of the world championships last week after being handed a four-year ban in a case long pursued by the U.S. Anti-Doping Agency. Salazar leads the Nike Oregon Project, which Centrowitz joined after the 2012 London Games

“Alberto never once offered me anything that I was uncomfortable taking or made any those decisions you may be reading about,” said Centrowitz, who finished eighth in the 1,500 meters and more than 3 seconds behind winner Timothy Cheruiyot of Kenya. “I had no idea that any of this was going on when I was with the group.

“That had nothing to do with my decision. … I felt like I needed some change, something fresh, something new.”

The 2016 Olympic gold medalist is now running for the Bowerman Track Club.

Hall of Famer Carl Lewis said on his Twitter account that he applied to be a member of the IAAF athletes’ commission.

“Let’s see if they want someone speaking to power about the issues that really affects athletes, gets in,” Lewis wrote. “Stay tuned.”