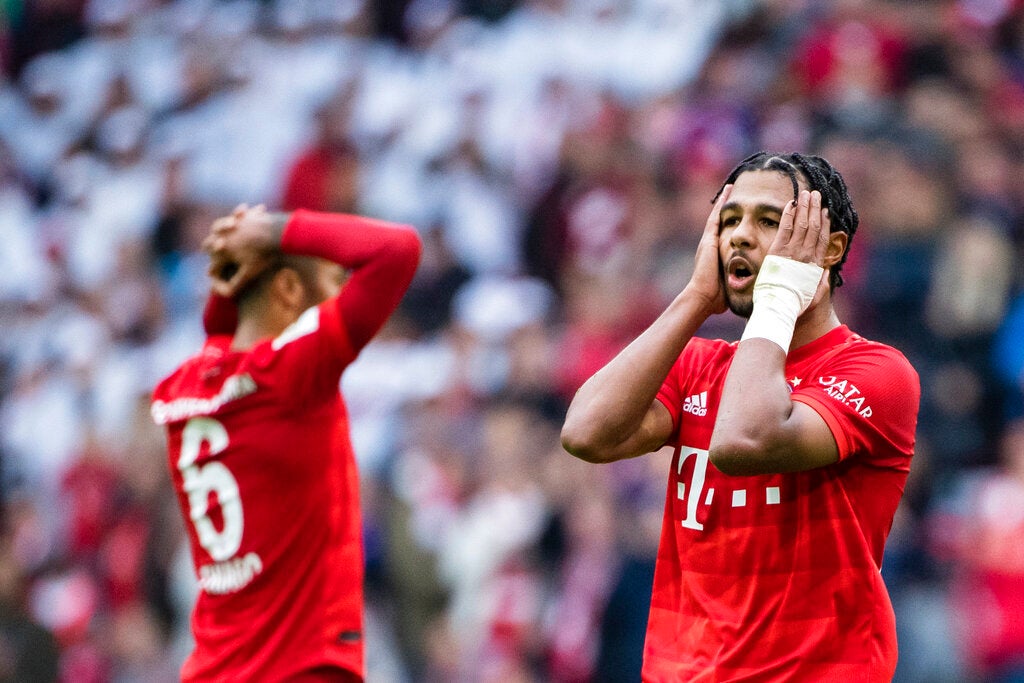 In this Saturday, Oct. 5, 2019 photo Bayern’s player Serge Gnabry, right, reacts after the German Bundesliga socvcer match between FC Bayern Munich and 1899 Hoffenheim in Munich, Germany. Bayern Munich’s first defeat of the season has exposed old problems that a 7-2 rout of Tottenham had helped cover up only days before. (Matthias Balk/dpa via AP)

BERLIN— Bayern Munich’s first loss of the season has exposed old problems that a 7-2 rout of Tottenham had helped cover up only days before.

After producing the seven-goal gala in London in the Champions League on Tuesday, Bayern might have expected more of the same against modest Hoffenheim in the Bundesliga on Saturday.

But Hoffenheim had other ideas and took advantage of Bayern’s weaknesses in a 2-1 victory against the seven-time defending champions. Sargis Adamyan scored twice in Hoffenheim’s first ever victory in Munich.

Bayern looked lethargic and complacent, perhaps too comfortable in relying on a moment of individual brilliance from the likes of Robert Lewandowski, Philippe Coutinho or Serge Gnabry, who himself nabbed four goals against Tottenham.

Lewandowski maintained his record of scoring in every league game so far, a record mark of 11 goals in eight games, but it wasn’t enough to make up for the mistakes that culminated with the team’s first loss.

Corentin Tolisso lost the ball in midfield in the buildup to Adamyan’s first goal, while Bayern’s defense failed to close him down before the Armenian striker scored his second.

“We made too many mistakes and never put our opponents under pressure,” Kovac said.

With the exception of Thiago Alcantara coming in for the injured David Alaba, Kovac started with the same players who had impressed against Tottenham, leaving Thomas Müller on the bench for the fifth game in a row.

“If need be, he will certainly get his minutes,” Kovac said of Müller, who came on for the last half-hour and set up Lewandowski’s equalizer.

Müller was the first player to leave Bayern’s stadium after the defeat.

“Nothing to say, as the English say,” he said.

Fellow substitute Javi Martínez was in tears after staying on the bench. The Spanish midfielder, so highly valued by former Bayern coach Jupp Heynckes, has not started this season, with just five appearances as a substitute across all competitions.

“You also have to give 100% or 110% in the Bundesliga, not just the Champions League,” Salihamidzic said.

Bayern has 14 points, one more than it had at the same stage last season, when it was already four points behind Borussia Dortmund.

Dortmund has only 12 points after three consecutive draws, while Borussia Mönchengladbach is the surprise leader after seven rounds.

Bayern’s players weren’t too happy at the annual Oktoberfest celebrations on Sunday.

“We’d rather have come here after a victory,” Bayern defender Niklas Süle said.