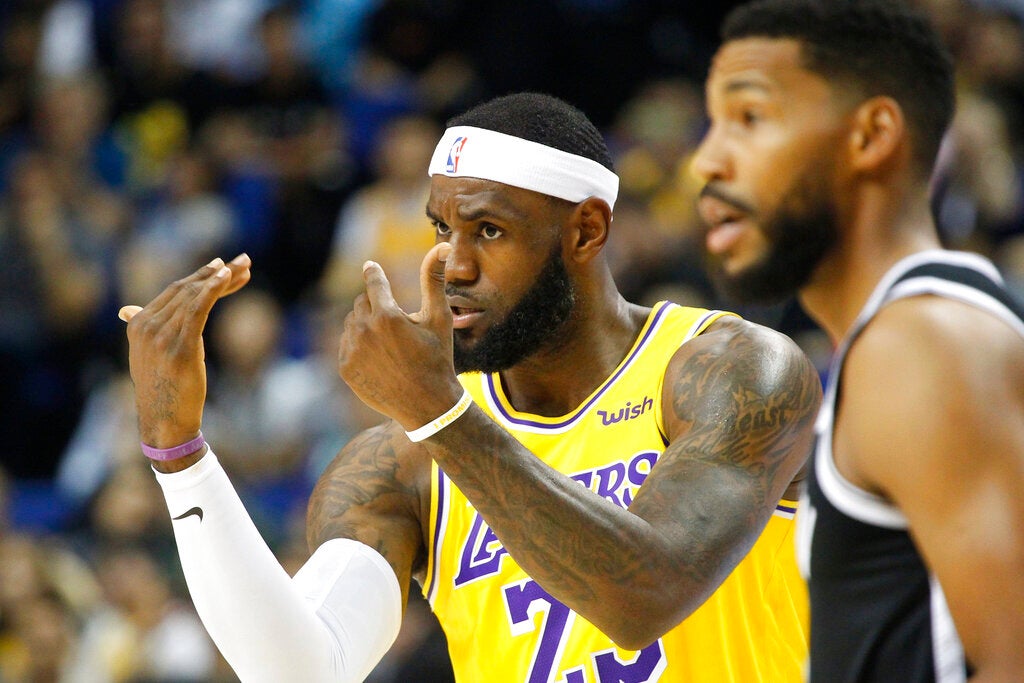 Los Angeles Lakers’ Lebron James gestures during a preseason NBA game against the Brooklyn Nets in Shanghai, China, Thursday, Oct. 10, 2019. All of the usual media sessions surrounding the Lakers-Nets preseason game in Shanghai on Thursday — including a scheduled news conference from NBA Commissioner Adam Silver and postgame news conferences with the teams — were canceled. It was the latest salvo in the rift between the league and China stemming from a since-deleted tweet posted last week by Morey, the general manager of the Houston Rockets.(AP Photo)

Kyrie Irving flew halfway around the world to play for 66 seconds.

Irving aggravated his facial fracture shortly after tip-off in his preseason debut for the Brooklyn Nets, who beat the Los Angeles Lakers 114-111 in the opener of this year’s two-game NBA China Games series on Thursday in Shanghai.

Spencer Dinwiddie, who replaced Irving, led the Nets with 20 points and Taurean Prince finished with 18 for Brooklyn.

LeBron James scored 20 points for the Lakers, who got 18 from Rajon Rondo and 16 from Anthony Davis.

A schedule of games that included a 40-point performance from Stephen Curry and the Clippers debut of Kawhi Leonard featured an unusual scene in Shanghai.

The game was played after several events to promote the NBA’s annual appearance in China were called off because of the rift between China’s government and the league — started by a since-deleted tweet from Houston general manager Daryl Morey that supported anti-government protesters in Hong Kong.

The U.S. and Chinese national anthems were not played before the game. All media events Thursday at Mercedes-Benz Arena — including pregame availabilities, postgame news conferences and a long-scheduled media session with NBA Commissioner Adam Silver — were canceled.

The Chinese state broadcaster CCTV said it was not going to show the Lakers-Nets games on Thursday or in Shenzhen on Saturday. NBA broadcast partner Tencent also said it was changing its coverage plans for the league.

But fans came in droves, nearly every seat in the 18,000-seat arena appeared filled and they cheered for James loudest of all — as usual. James has made almost-annual visits to China during his NBA career to promote the game and his personal brand, and his popularity there is enormous.

Given fan reaction to James there this week, including being mobbed by well-wishers who chanted and snapped countless pictures with their phones as he walked through a Shanghai mall on Wednesday, not even the politically charged unrest between China and the NBA could dampen how revered he is in the world’s most populous country.

It was a topic again in Tokyo on Thursday, where Houston and Toronto finished their two-game series. The Rockets, of course, have been at the forefront of the rift between China and the league because of Morey’s tweet.

“You know what? It’s a tough situation,” Rockets coach Mike D’Antoni said after Houston’s 118-111 win over the reigning NBA champion Raptors. “Very difficult. Adam Silver speaks for the NBA. I work for the NBA. I go with Adam. Commissioner Silver will do the right thing.”

Irving tried to play through his left-side facial fracture, an injury that occurred in a pickup game last month. He was wearing a clear mask in an effort to protect his face, but bumped into Rondo while playing defense just 1:06 into the contest.

Irving’s face made contact with Rondo’s upper arm. The Nets guard immediately winced in pain, took the mask off and motioned to the bench that he needed a substitute.

If that wasn’t concern enough, the Nets lost their other starting guard just 22 seconds later. Caris LeVert left with 10:32 remaining in the first quarter after being poked in the eye and didn’t return.

James made 7 of 15 shots, including 2 of 3 from 3-point range and added six rebounds in 24 1/2 minutes. The Lakers and Nets play again Saturday in Shenzhen, China.

Malik Beasley had 16 points and Nikola Jokic added 10 points and 11 rebounds for Denver (2-0).

Paul Millsap had 13 points and Michael Porter Jr. scored 12 for the Nuggets.

In Tokyo, Russell Westbrook and James Harden each scored 22 points to lead Houston.

Neither of the Rockets’ starting guards shot particularly well — combined, they were 13 of 33 from the field and 4 for 19 from 3-point range — and Harden missed his last six 3-point attempts. But the Rockets started fast, getting out to a 22-8 lead, and then overcame a 13-point, second-half deficit after both sides pulled most of their starters.

And the fans — more than 20,000 in Tokyo — loved what they saw from the former MVPs, regaling them both with “M-V-P” chants.

“It feels great anytime you hear those chants. Both of us have accomplished that unbelievable goal, being MVP,” Harden said. “I think the reason that we’re here together is to accomplish something bigger than that. Obviously, it’s going to take time but we’re in the right direction, right steps. We have a long season ahead of us and I think we’re all excited for it.”

Norman Powell scored 22 for Toronto, which got 16 points from Pascal Siakam and a 10-point, 10-assist double-double from Fred VanVleet.

The Thunder scored 72 points in the paint and never trailed. Shai Gilgeous-Alexander added 18 points and Hamidou Diallo scored 16. Danilo Gallinari and Nerlens Noel did not play.

Roman Sorkin had 17 points, and Norris Cole and Brandon Rush added 10 points apiece for Maccabi Haifa. Haifa lost to the Grizzlies 123-88 last Sunday and will wrap its NBA preseason tour by facing the Timberwolves on Sunday.

De’Aaron Fox scored 18 points to lead Sacramento over Phoenix in a matchup featuring Marvin Bagley III and Deandre Ayton, the top two picks of the 2018 draft.

Read Next
NCAA: Final 4-bound Letran stops Perpetual
EDITORS' PICK
Over 3 Million worth of prizes to be won at Smart Padala’s SENDali Manalo Promo!
Octogenarian jailed for ‘stealing mangoes’ freed after people chip in for bail
Gov’t eyeing COVID-19 tests in pharmacies
Gear up and get ready to play with Yamaha Mio Gear
Acer starts the year off strong with the Aspire Vero National Geographic Edition
Being a celebrity isn’t wholly an ‘advantage’ in the election, says Sotto
MOST READ
Imelda Marcos trends on Twitter after octogenarian jailed for allegedly stealing mangoes
Help pours in for octogenarian jailed for ‘stealing’ mangoes in Pangasinan
Natural immunity more potent than vaccines during US Delta wave—study
Bongbong Marcos-Sara Duterte tandem adds Zubiri, Gadon, Marcoleta to Senate slate
Don't miss out on the latest news and information.