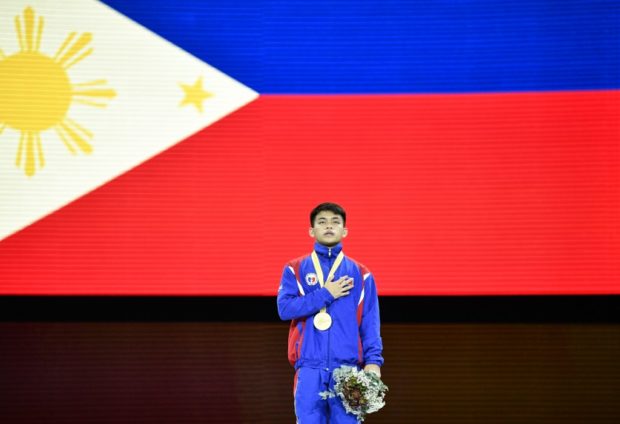 No, make that the brightest Filipino hope for a gold medal next year in the Tokyo Olympics.

Yulo ruled the floor exercise final and gave the country its first-ever gold medal in the 49th FIG Artistic Gymnastics World Championship, and that means, more than anything, beating basically the same high-quality field that he will be going up against in Tokyo next year.

And Yulo knows what’s ahead—how much work needs to be done to end the Philippines’ age-old quest for a Summer Games gold.

“For now, I just want to show my mother the gold medal I won,” said Yulo in Filipino after the awarding ceremonies.

He has been away from his mom and the entire family, being based in Japan to train. The family still lives along Leveriza Street in Pasay City, a few blocks away from the Rizal Memorial complex where he was influenced to take up the sport after watching the national gymnasts train.

Yulo sees his victory as a springboard to confidently confront the much bigger challenge next year in the Games.

“It (world championship win) will motivate me to work harder for the Olympics,” Yulo said.

At 19, Yulo was the youngest competitor in Stuttgart, and the 4-foot-11 bundle of energy knows that duplicating the world championship feat in Tokyo will require more effort.

“I’m very happy with my performance. But my coach has always been telling me that a lot of work still needs to be done,” said Yulo, who placed third in the same event last year in Doha.

Munehiro Kugimiya, Yulo’s Japanese coach for more than six years now, has transformed his ward into a world-class gymnast with an eye on the Olympics.

Raising the degree of difficulty from 6.2 to 6.5 paid dividends for Yulo as he outperformed Dolgopyat, who came into the final as the top qualifier.

Yulo’s winning score, though, was still a far cry from what the standard was in the Rio De Janeiro Games in 2016.

Max Whitlock of Great Britain won the gold medal in the floor exercise in Rio with a score of 15.633 based on difficulty and execution, while Brazil’s Diego Hypolito and Arthur Mariano finished second (15.533) and third (15.433), respectively.

Yulo, an awardee of the Philippine Sportswriters Association and the Siklab Sports Youth Awards, booked a ticket to the Games after advancing to the finals of the men’s all-around and floor exercise events.

He became just the second Filipino after pole vaulter EJ Obiena to book a slot to the Games.

A cash windfall from the government will likewise excite Yulo to end the country’s gold-medal drought in the Olympics, since a golden performance will net P10 million from the Philippine Sports Commission (PSC) plus future endorsements.

“Last year, I was looking at my [bronze] medal and I was like, ‘I will get the gold medal next year,’” Yulo said. “[Looking at it now] it’s ridiculous. I don’t really know. I didn’t expect to win this medal. I’m very happy right now.”

“We are all thrilled with the golden performance of Caloy (Yulo). The Office of the President and the PSC family congratulate Caloy for this achievement,” said PSC Chair William Ramirez.

Ramirez added that President Duterte was happy for Yulo while Executive Secretary Salvador Medialdea and Sen. Bong Go had been closely monitoring the competition.

Malacañang on Sunday hailed Yulo even as the PSC had already reportedly arranged a courtesy call on the President when he planes back from Germany on Monday.

Communications Secretary Martin Andanar congratulated Yulo on his victory, a feat which he said made all Filipinos proud.

“It is truly a historic event and we celebrate Yulo’s win with all our fellow Filipinos. We expect great things from this talented young man at the upcoming 2020 Tokyo Olympics,” he said.

“Our hard work has paid off. I thank the entire country for the love and support,” said Cynthia Carrion, president of Gymnastics Association of the Philippines. She expressed gratitude to Yulo’s chief backers, the PSC and MVP Sports Foundation (MVPSF).

According to Carrion, the PSC pays for the salary of Kugimiya while MVPSF shoulders the education and training of Yulo in Japan.

“Some of my personal friends also helped finance Caloy. I hope our developmental team will continue to grow, so that more attention will be given to gymnastics,” said Carrion, also a board member of the Philippine Olympic Committee.

Tokyo-based Yulo improved on last year’s bronze medal, which made him the first Filipino ever to occupy a podium spot at the championships.

A little over two hours after Yulo tasted glory, Ibrahim Colak struck gold in the rings final to hand Turkey its first-ever medal at the championships.

Colak earned a 14.933 to hold off a spirited challenge from Italy’s Marco Lodadio, who finished just 0.033 of a point behind.

“I’m so happy for this. I don’t know what can I say but I did,” Colak said. “Also, I have tickets for the Olympic Games now. This will be the first time for me.”

France’s Samir Ait Said took the bronze medal, three years after he suffered a horrific leg break at the 2016 Rio Olympics. —With reports from Julie M. Aurelio and the wires