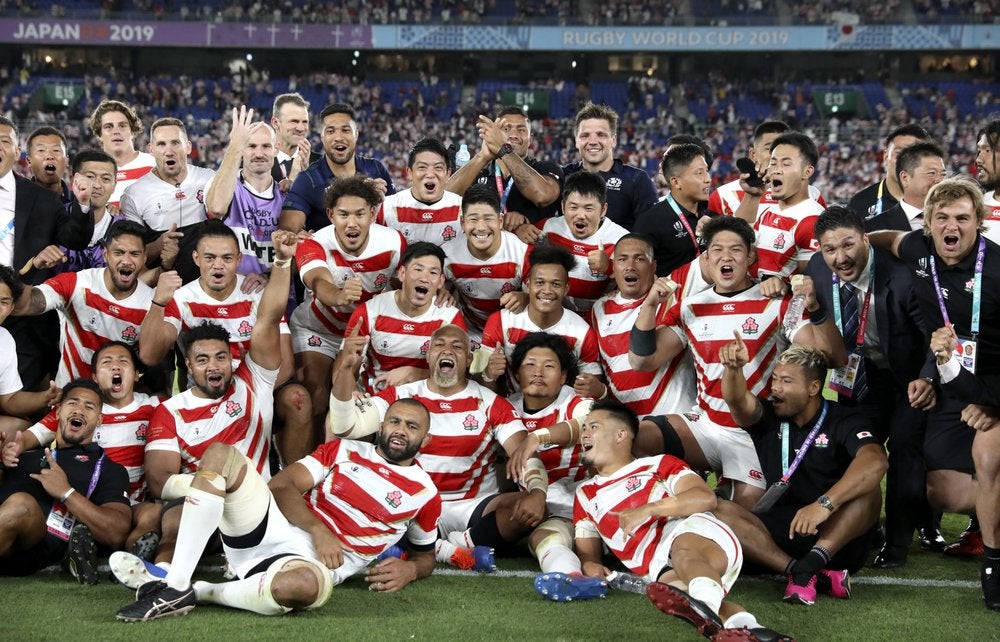 Of the 23 players who earned Japan’s historic first appearance in the Rugby World Cup quarterfinals on Sunday, only 11 were born to Japanese parents.

The rest were a mix of nationalities with various ties to Japan, who held out Scotland 28-21 in a thrilling match before a partisan crowd of 68,000 at Yokohama Stadium.

“I believe (the team) can be a mirror of this Japanese society,” Hideto Itami said in English alongside his wife Chikako at the match. “Gradually, we have so many foreigners as a part of Japanese society.”

Fans held up signs that read “We Are One Team” to celebrate the milestone victory, and the rest of Japan is becoming convinced. There was criticism of the amount of foreigners when the squad was announced in August, and that has died down as the team has gone on an unprecedented winning run through its pool.

The win against Samoa last weekend drew a record TV audience in Japan of 46.1% on free-to-air Nippon Television. Local media said it was the most-watched sporting event of the year in Japan, surpassing Osaka’s win in the Australian Open final. That mark was expected to be shattered on Sunday night, with the promise of a quarterfinal next weekend against two-time champion South Africa.

Flyhalf Yu Tamura, the leading scorer in the tournament, was born to Japanese parents, along with winger Kenki Fukuoka, who has four tries in three matches.

Captain Michael Leitch was born in New Zealand with Fijian heritage, but came to Japan to study when he was 15 and speaks Japanese better than English. He’s the face of Japanese rugby, and his sponsors have placed him in media everywhere.

Winger Kotaro Matsushima was born in South Africa to a Japanese mother and a Zimbabwean father.

And Jamie Joseph — a former New Zealand forward — switched to play for Japan in 1999 and now coaches the Brave Blossoms.

To be fair, Scotland had several non-Scotland-born players.

Some children in Japan with one non-Japanese parent have often been bullied and called “hafu” from the English word “half.” The demeaning term could fall out of use as more and more Japanese have a non-Japanese-born parent and immigrant roots.

“I’d like all Japanese people to understand the changing of Japanese society,” Itami said, with the Chinese characters meaning “To win” painted on his right cheek. “We do not need to care if the blood is purely Japanese or not. If they understand the Japanese way, that’s all that’s needed.”

His wife had “I Love Japan” painted on her left cheek and was wearing a good-luck charm from a Shinto shrine.

“Honestly, many younger people — even Japan-born — sometimes do not understand our history or our culture,” Imani said.

Japanese Asuka Mitachi stood nearby, watching as women in kimonos and men in kilts passed by as she returned to her seat. Some Japanese women wore tartan plaid skirts, topped off by Japan’s red and white jersey. Many carried fans that opened to reveal the word “Try.”

“We’re a very international team,” Mitachi said. “Very much the future. The future of Japan is international.”