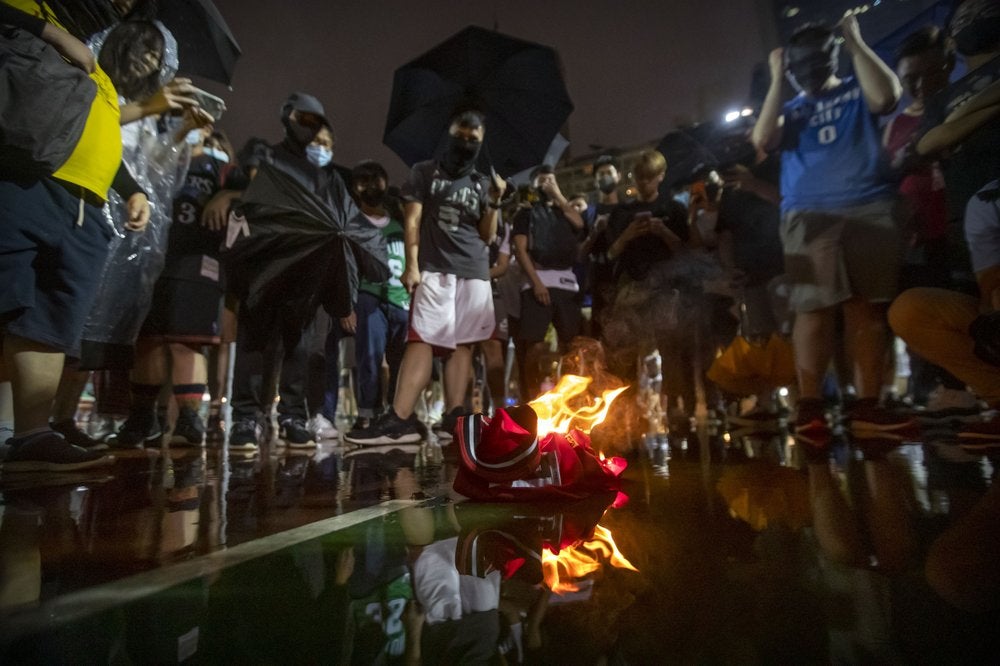 Demonstrators watch as a Lebron James jersey burns during a rally at the Southorn Playground in Hong Kong, Tuesday, Oct. 15, 2019. Protesters in Hong Kong have thrown basketballs at a photo of LeBron James and chanted their anger about comments the Los Angeles Lakers star made about free speech during a rally in support of the NBA and Houston Rockets general manager Daryl Morey, whose tweet in support of the Hong Kong protests touched off a firestorm of controversy in China. (AP Photo/Mark Schiefelbein)

HONG KONG — When the ball smashed into a photo of LeBron James’ face stuck above the hoop and dropped into the basket, the Hong Kong protesters cheered.

They also trampled on jerseys bearing his name and gathered in a semicircle to watch one burn.

James’ standing among basketball fans in Hong Kong took a hit because of comments the NBA star made about free speech. Fans gathered on courts amid Hong Kong’s high-rise buildings Tuesday to vent their anger.

The player for the Los Angeles Lakers touched a nerve among protesters for suggesting that free speech can have negative consequences. They have been protesting for months in defense of the same freedom that James said can carry “a lot of negative.”

The protesters chanted support for Houston Rockets general manager Daryl Morey, something of a hero among demonstrators in the semi-autonomous Chinese territory for having tweeted in support of their struggle, infuriating authorities in China.

What the crowd of approximately 200 people chanted about James wasn’t printable.

“People are angry,” said James Lo, a web designer who runs a Hong Kong basketball fan page on Facebook. He said he’s already received a video from a protester that showed him burning a No. 23 jersey bearing James’ name.

He expects more, given the backlash from protesters who’ve been regularly hitting the streets of Hong Kong and battling police because of concerns that the international business hub is slowly losing its freedoms, which are unique in China.

James made his comments in response to a question about whether Morey should be punished for his tweet that reverberated in China and had consequences for the NBA.

“Yes, we do have freedom of speech,” James said. “But at times, there are ramifications for the negative that can happen when you’re not thinking about others, when you only think about yourself.”

He added: “So many people could have been harmed, not only financially but physically, emotionally, spiritually. So just be careful what we tweet and what we say and what we do. Even though yes, we do have freedom of speech, it can be a lot of negative that comes with it.”

Protesters said James’ comments smacked of a double-standard, because he’s used his clout as a sports headliner to press for social causes in the United States.

Others said LeBron’s comments made it seem that he’s more worried about money than people.

“James was trying, you know, to take a side, on the China side, which is like ridiculous,” said Aaron Lee, a 36-year-old marketing director. “He was being honest, financially. Financial is money. Simple as that. LeBron James stands for money. Period.”