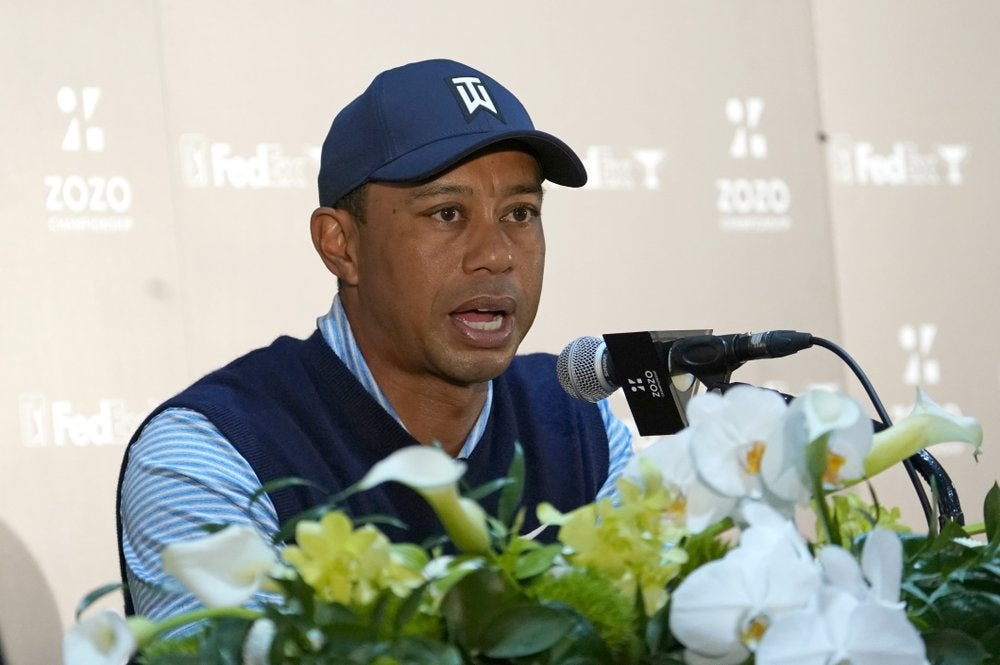 Tiger Woods of the United States answers a reporter’s question during a news conference ahead of the Challenge: Japan Skins event at Accordia Golf Narashino C.C. in Inzai, Japan, Monday, Oct. 21, 2019. Tiger Woods will play at the Zozo Championship PGA Tour which will be held at Oct. 24-27. (AP Photo/Lee Jin-man)

INZAI CITY, Japan — Tiger Woods is returning from another surgical procedure on his left knee — his fifth on the same problem spot.

“Unfortunately, I’ve been down this road with my knee before,” Woods said Monday. “This is my fifth operation on it. I understand what it takes to come back from it. It’s been nice to have movement again and not having it catch and lock up.”

Woods, who had arthroscopic surgery two months ago, plays the made-for-television “The Challenge: Japan Skins” event on Monday, and the Zozo Championship beginning on Thursday — the first full PGA Tour event in Japan.

Woods will play with Rory McIlroy, Jason Day, and Hideki Matsuyama in the skins game at the Narashino Country Club, the same venue for Zozo Championship. The course is located about 50 kilometers (30 miles) northeast of central Tokyo.

The course for next year’s Olympics is located nearby at the Kasumigaseki Country Club.

Woods said the knee troubled him all season, becoming more bothersome after he won the Masters in April.

“It progressively got worse and got to where it was affecting even reading putts,” Wood said. “You could see toward the end of the year I wasn’t getting down on my putts well.”

Woods said he had the surgery, wanting to be ready for the two events this week in Japan, followed in December by the Hero Challenge, and the Presidents Cup in Melbourne, Australia.

“It’s been nice to be able to squat down and read putts and start going at it full speed again,” Woods said. “It’s just been wear-and-tear over the years. It’s just been stressed out for a very long time.”

Woods repeated his interest in playing in next year’s Tokyo Olympics. But he has work to do to qualify.