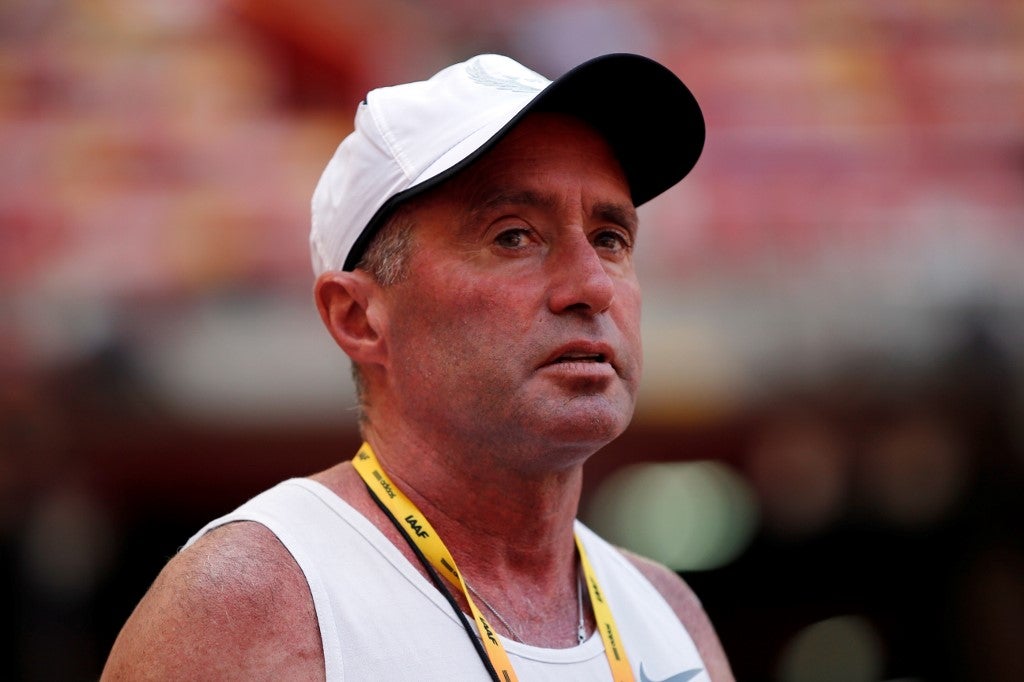 (FILES) In this file photo taken on August 21, 2015 Cuban-American coach Alberto Salazar attends a practice session ahead of the 2015 IAAF World Championships at the “Bird’s Nest” National Stadium in Beijing. – Nike said on October 11, 2019 it was shutting down its Oregon Project distance-running group that has produced a host of world and Olympic gold medals after top coach Alberto Salazar was banned for four years for doping. (Photo by Adrian DENNIS / AFP)

The Nike Oregon Project was set up to end the distance-running dominance of the east Africans but has become a huge headache for the US sportswear giant, which said Friday it was shutting it down.

Alberto Salazar, the coach who founded the prestigious Portland-based training group in 2001, pushed himself to the brink as an athlete, and preached the same philosophy as a coach.

But the 61-year-old Cuban-born American’s will to win went too far, according to the US Anti-Doping Agency (USADA), which last week banned him for four years for multiple doping violations.

Salazar has been a major figure in American athletics for decades, having won the 1980, 1981 and 1982 New York Marathons and the 1982 Boston Marathon.

He is a long-time friend of Nike founder Phil Knight and persuaded him that if the company financed his dream project, he could end the stranglehold of Kenyan and Ethiopian athletes on distances from 800 meters to 10,000m and the marathon.

Salazar’s career is intertwined with Nike’s rise to become the world’s pre-eminent sportswear manufacturer — he even has a tattoo of the company’s swoosh logo.

Even as Nike CEO Mark Parker announced he was closing the Oregon Project on Friday, he said in a memo to staff that Nike would still support Salazar in his appeal because the ban “for someone who acted in good faith is wrong”.

Parker said the arbitration panel that finalised Salazar’s ban “found there was no orchestrated doping, no finding that performance enhancing drugs have ever been used on Oregon Project athletes and went out of its way to note Alberto’s desire to follow all rules”.

The project currently includes Sifan Hassan of the Netherlands, who won the women’s 1500m and 10,000m titles at the World Championships in Doha last week, and Donavan Brazier, who took the men’s 800m gold.

There is no suggestion that any of these athletes have been involved in wrongdoing, but since Salazar’s ban, Farah is facing new questions about why he continued working with the coach even when he knew he was under investigation.

Farah won the Oregon Project’s first Olympic gold in 2012 in London in the 10,000m. Galen Rupp, a long-time Salazar protege, took the silver medal behind him, and Farah also claimed the 5,000m gold.

– Experiments with testosterone –
But behind the scenes, Salazar’s colleagues were concerned. Steve Magness, who spent 18 months as Salazar’s assistant but quit before the London Olympics, spoke out as a whistleblower when the BBC’s investigative show Panorama and ProPublica investigated doping allegations in 2015.

Testimony from various figures alleged microdosing of testosterone, among other suspicious actions.

The USADA report into Salazar’s activities revealed that Salazar kept Nike CEO Parker informed of his experiments with injecting a mixture of amino acid and dextrose at doses clearly above what would be allowed under World Anti-Doping Agency (WADA) regulations.

In another email to Parker, Jeffrey Brown, a doctor who worked with the NOP and has also now been banned, described experiments with testosterone gel.

Parker responded to Brown, “It will be interesting to determine the minimal amount of topical male hormone required to create a positive test.”

A Nike spokesman said Parker “had no reason to believe that the test was outside any rules as a medical doctor was involved” and that he believed Salazar “was attempting to prevent doping of his athletes”.

Under Salazar’s guidance, Farah won another golden double at the Rio Olympics in 2016 where Rupp took marathon bronze and another Oregon Project athlete, Matt Centrowitz, won the 1,500m.

By the time Farah left the group in October 2017, USADA was investigating Salazar and Brown.

The case against the two went to the American Arbitration Association, with hearings conducted in May and June 2018 setting the stage for the rulings handed down last week.

USADA chief executive Travis Tygart said Salazar and Brown had “demonstrated that winning was more important than the health and wellbeing of the athletes they were sworn to protect”.

Salazar has strongly denied any wrongdoing and said he and his athletes “have endured unjust, unethical and highly damaging treatment from USADA”.

“The Oregon Project has never and will never permit doping,” he said.