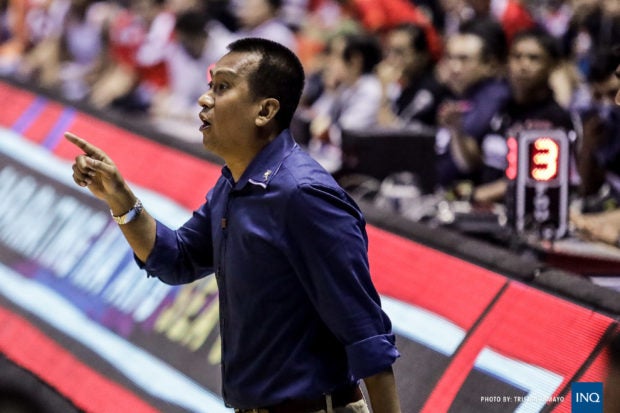 Magnolia coach Chito Victolero felt that a week’s rest did wonders for his Hotshots.

Which explains why he was so fixated with the idea of going into another long break—and not caring about momentum—even after hammering out a 118-103 victory over Columbian Sunday night in the PBA Governors’ Cup at Smart Araneta Coliseum in Cubao.

“I told my players that this should mark the start of our playoffs,” Victolero said, shortly after his charges snapped a three-game losing streak and improved to 4-4 that put them in the middle of the 12-team pack.

Now, the defending champions have a 10-day respite to prepare for a hard grind againstPhoenix, and pace-setters TNT and NLEX to end their elimination round campaign where they, without a doubt, will be shooting to finish in the top four.

Victolero doesn’t care about losing momentum anymore, because the days in between the tough loss to Barangay Ginebra on Oct. 20 and Sunday afforded Romeo Travis ample recovery time for his ankle injury, and Jio Jalalon to shake off anxiety from trade rumors.

“He was just at around 60 percent the last game,” Victolero said of his import, who finished with a team-best 28 points. Getting Travis even more rest before that three-game grind will obviously be better for the Hotshots.

“With Jio, we needed that energy of his. He was able to settle down considering the (trade) issues and everything,” he added of his hard-nosed guard, who chipped in 19 points.

Ian Sangalang came off the bench and tossed in 24 points with two more locals finishing in double digits.

“This game was really a must-win for us, especially coming from a three-game losing streak,” said Victolero. “We really needed to get back on track,” he added.

Three more victories for the Hotshots could give them a shot at gaining a twice-to-beat advantage in the first round of the playoffs.

Read Next
Betten, Duke reign in Subic
EDITORS' PICK
Smart releases Hyun Bin’s second TVC
Current dominant strain of COVID-19 more infectious than original—study
Water remains our saving grace right now
EuroMillions Superdraw: A lottery draw unlike any other is coming to the Philippines
‘Justice will be done,’ Duterte assures as he vowed probe on Jolo incident to bare ‘truth’
DOLE: Return of OFWs’ remains from Saudi to be ‘delayed,’ deadline moved to ‘early next week’
MOST READ
BREAKING: Duterte signs anti-terror bill into law
Duterte tells military: No other president looked at you the way I did
Locsin warns of ‘severest response’ if China’s army drills in SCS ‘spill over’ to PH domain
Current dominant strain of COVID-19 more infectious than original—study
Don't miss out on the latest news and information.