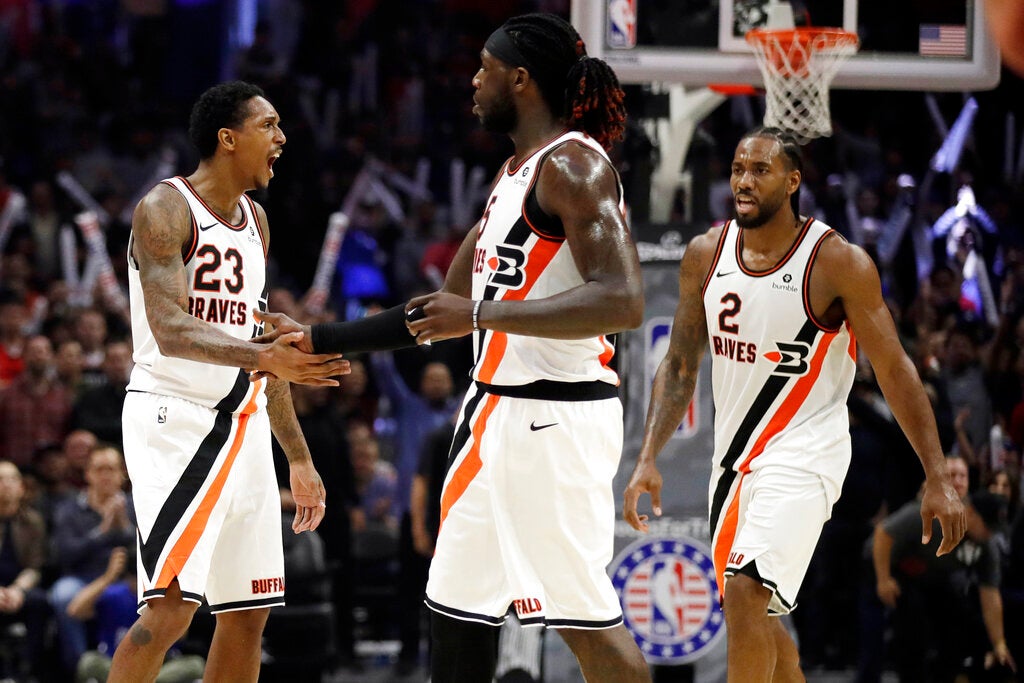 Los Angeles Clippers’ Lou Williams (23) celebrates after making a 3-point basket with Montrezl Harrell, center, and Kawhi Leonard (2) during the second half of the team’s NBA basketball game against the Portland Trail Blazers on Thursday, Nov. 7, 2019, in Los Angeles. (AP Photo/Marcio Jose Sanchez)

LOS ANGELES — The Clippers were kings of the fourth quarter. Portland star Damian Lillard lost his crown, at least for a night anyway.

Lou Williams made a go-ahead jumper with 58 seconds left, then added a 3-pointer and finished with 26 points to lift Los Angeles over the Trail Blazers 107-101 on Thursday for coach Doc Rivers’ 900th career victory.

Lillard and CJ McCollum led Portland with 22 points apiece, but surprisingly both got blanked in the fourth quarter. That’s usually Lillard’s time to shine, but the Clippers’ defense wasn’t having it.

“Usually I can make those shots down the stretch, but they weren’t falling,” Lillard said. “They were coming out to guard me and picking up full court. Pat Beverley did a good job on defense.”

“It’s the third game that we’ve won, in my opinion, completely because of our defense,” Rivers said. “Our offense was below average. If you can win a game and not play well offensively, that says a lot about your team.”

Leonard had 27 points, 13 rebounds and six turnovers after missing a nationally televised loss to Milwaukee the previous night as part of load management for his knee.

“Over the last six minutes of the game, we got stops, got rebounds and made our free throws. Lou also made a big 3 for us,” Leonard said. “We played good defense and stuck in there the whole game and we stayed positive. It was a grind-out win for us.”

“The Lou-him combination was lethal down the stretch,” Rivers said.

With Lillard and McCollum getting shut down, Anfernee Simons scored 16 of his 17 points in the fourth, including Portland’s first 12 of the quarter.

The Clippers rallied from eight points down early in the period, taking their first lead on Leonard’s basket.

The Blazers tied it 98-all on a three-point play by Hassan Whiteside.

Williams’ jumper put the Clippers ahead for good and he followed it up with a 3 — one of just four made by the Clippers in the game.

The Blazers regained the lead in the third, outscoring the Clippers 36-23. Portland tied it 61-all on McCollum’s 3-pointer, spurring an 18-7 run that sent the Blazers into the fourth leading 76-70.

Trail Blazers: McCollum received a flagrant-1 foul late in the second quarter after his right foot hit Patrick Patterson in the face on a fadeaway jumper. Patterson landed near the LA bench. “Surprised the foot made it up that high,” said the 6-foot-8 Patterson. McCollum is 6-3. “I was playing full speed and I ran into him on the baseline,” McCollum said. “I didn’t do it on purpose.” … Portland’s 40 points in the first half were its fewest in a half this season.

Clippers: Improved to 5-1 at home. … Leonard went over 3,000 rebounds in his career, and Ivica Zubac surpassed 700 boards. … Won the second half of a back-to-back for the second time this season.

Rivers got doused by Montrezl Harrell in the postgame locker room to celebrate his milestone. He’s the 13th coach in NBA history to reach 900 wins.

Rivers began his coaching career 21 years ago and credited late Detroit Pistons coach Chuck Daly for vouching for him.

“It’s just the people,” he said, citing his assistants over the years in Orlando, Boston and LA. “The players are the most important. They make you better. Those plays you run at the end, that’s the players making those shots. It’s all them.”

Trail Blazers: Host the Brooklyn Nets on Friday in the second game of a back-to-back, their second of the season.

Clippers: Host the Toronto Raptors on Monday in Leonard’s first game against the team he led to its first NBA championship last season.

Read Next
Rodrygo becoming preferred Brazilian teenager at Real Madrid
EDITORS' PICK
Bong Go demands ‘fair reporting’ from ABS-CBN but will appeal to Duterte to save jobs
Mallorca City: Home of Cavite’s finest industrial hub
Wilder says costume wore him down before Fury did
Franchise of media giant to go on Guevarra tells senators
ABS-CBN apologizes to Duterte for 2016 election ad mess
Here’s How Protein and Calcium Deficiency Can Affect Your Kid’s Health
MOST READ
Jordan: ‘When Kobe Bryant died, a piece of me died’
Dominguez: ABS-CBN account on unaired ads ‘does not tally’ with Duterte campaign experience
Duterte: Set aside petty political differences to ensure Edsa legacy lives on
Lacson: For House to sit on pending bills ‘reeks of abdication’
Don't miss out on the latest news and information.