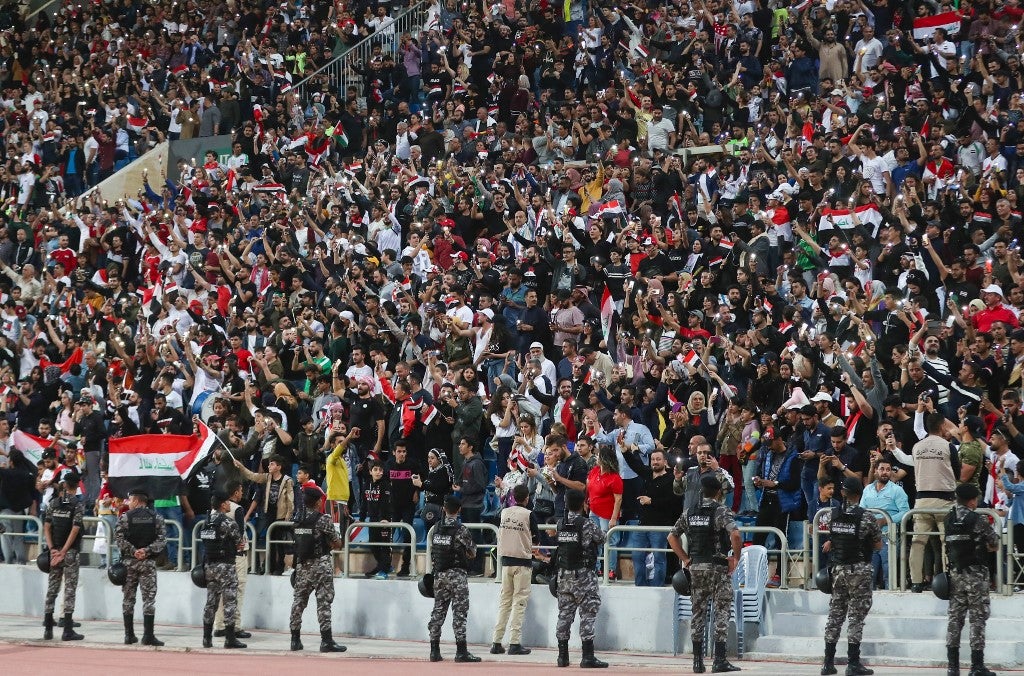 Jordanian police stand guard during the FIFA World Cup 2022 and the 2023 AFC Asian Cup qualifying football match between Iraq and Iran in the Jordanian capital Amman on November 14, 2019. (Photo by Khalil MAZRAAWI / AFP)

Jubilant Iraqis celebrated a football win against Iran Thursday as a desperately needed morale boost for protesters who have rallied against the Baghdad government and its backers in Tehran.

The highly-anticipated match, which ended in a 2-1 victory for Iraq, was an uplifting end to a day that began with four demonstrators killed as they were hit by tear gas canisters in Baghdad.

Many of the expatriate Iraqi fans who streamed into the football stadium in the Jordanian capital Amman were dressed in black to honor the dead protesters or donned the medical masks demonstrators wear to protect them against tear gas.

In Baghdad’s Tahrir (Liberation) Square, the heart of the month-long grassroots movement that has claimed over 330 lives, activists watched the match on a giant screen after a day of clashes with riot police.

When Iran’s national anthem played before the match, they booed and chanted “Iran out, Baghdad will remain free” to the martial pounding of drums.

And when the Iraqi team scored their first goal at the ten-minute mark, they cheered in Amman as the cracking of fireworks echoed throughout Baghdad.

Iran and Iraq fought a 1980-1988 war and were rivals under former dictator Saddam Hussein, but the predominantly Shiite states grew close after he was ousted in the 2003 US-led invasion.

More recently, however, Iraqi demonstrators have directed their ire at Iran for backing the government they want to bring down, accusing Tehran of economic and political meddling and overreach in Iraq.

It was a sentiment shared by Mustafa Abdullah, aged in his 40s and one of about 70,000 Iraqis living in Jordan, who came to the match carrying his national flag.

“Our most important objective is to send a clear message to all the Iraqi people — the Sunnis, the Shiites, the Kurds — that we reject the interference of Iran and its agents in our country,” he said.

“Iran and its agents are the cause of the woes that swept over Iraq after the fall” of Saddam in 2003, he told AFP.

The match between the two football-mad nations was to have been played in the southern port city of Basra.

But FIFA said it had assessed “the current security situation in Iraq” and informed the local federation that upcoming matches “must be played on neutral ground”.

Jordanian security forces were deployed heavily around the stadium during the match, which coincided with a separate game pitting Jordan against Australia.

Hours before the match began, thousands of Iraqis streamed into the Amman football stadium, the country’s largest, benefiting from free entrance offered to them by their country’s football association.

They brandished Iraqi flags but were barred from carrying posters or protest signs into the arena.

“We came to fulfill our duties by, first, supporting our team, and second, expressing support to our brothers who rose up against corruption and injustice in Iraq,” said Nawras al-Mashhadani, an Iraqi living in Amman.

She said the match offered a temporary respite from the “scenes of bloodshed and fire” that usually come out of her home country.

Amjad Fahed, an Iraqi in his fifties, said he wanted Iraqis to “crush Iran on the football field”, as well as back home.

After the game, Arkan Najib, a famous veteran of Iraqi football, said the win had sent “a big message to the families of the martyrs and the heroes in Tahrir Square.”

Back in Baghdad, as the crowd celebrated, even Iranian-manufactured Saipa vehicles mostly as taxis in Iraq zipped around Tahrir flying Iraqi flags, the passengers inside chanting in support of Iraq’s national team.

“They made their people and their audience happy,” said Sara, 25, about the Iraqi squad.

“The team proves that we have heroes everywhere, not just in Tahrir square.”