Wilder ready to risk all against ‘King Kong’ Ortiz 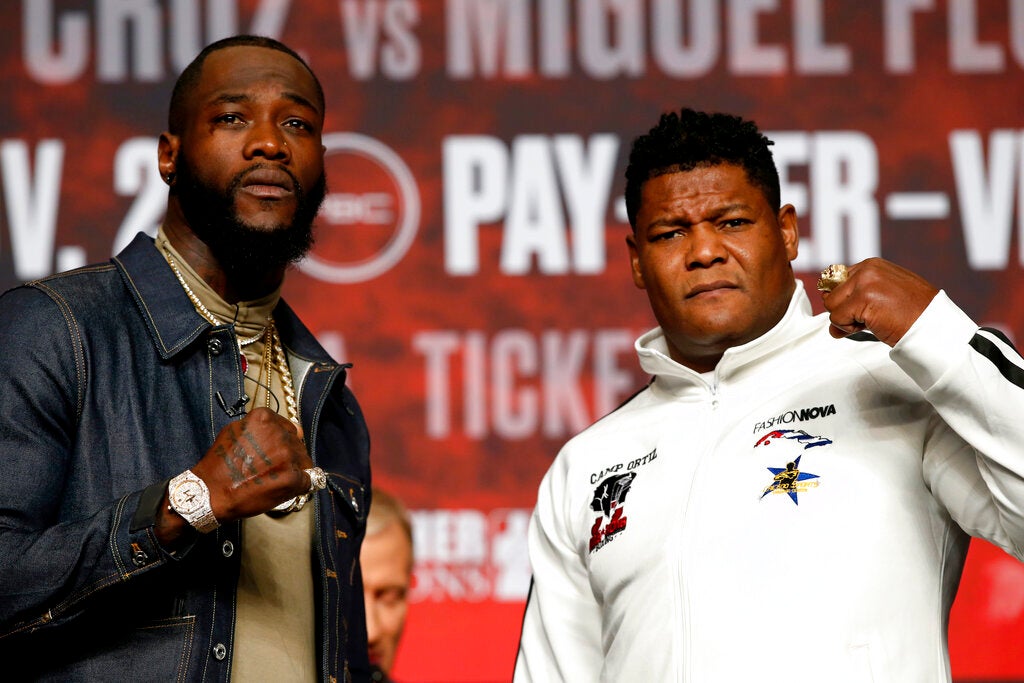 WBC heavyweight champion Deontay Wilder, left, poses with Luis Ortiz during a final news conference at MGM Grand Garden Arena in Las Vegas Wednesday, Nov. 20, 2019. The boxers will have a rematch at the arena on Saturday, Nov. 23, 2019. (Steve Marcus/Las Vegas Sun via AP)

Deontay Wilder puts his WBC world heavyweight title and the possibility of a money-spinning superfight on the line here Saturday when he climbs back into the ring for a rematch with dangerous Cuban veteran Luis Ortiz.

Twenty months ago, Wilder was rescued by the bell after Ortiz wobbled the American in the seventh round of their first clash, unleashing a flurry of punches to leave the champion staggering around the ring.

Wilder recovered from that bombardment to score a spectacular 10th round knockout, preserving his grip on the WBC belt and his unbeaten record.

Since then, Wilder has fought twice, battling to a thrilling draw with Tyson Fury last December before annihilating Dominic Breazeale in the first round in May.

The 34-year-old already has a rematch with Fury provisionally scheduled for Las Vegas next February, and could also expect to be at the front of the queue to face the winner of next month’s rematch between Anthony Joshua and Andy Ruiz in Saudi Arabia.

Both the Fury fight or a possible unification match with Ruiz or Joshua would be guaranteed to generate untold millions for Wilder, who is unbeaten in 42 fights and widely regarded as the most destructive puncher in the division.

Given all that, many observers see Wilder’s decision to press ahead with the man nicknamed “King Kong” as a risky move.

While an emphatic Wilder victory would stoke excitement for a Fury rematch, and boost the champion’s box office appeal, the not inconceivable possibility of defeat could spell disaster.

Wilder, however, dismissed the concerns, instead emphasizing that giving Ortiz a rematch was the honorable thing to do.

“For the removal of all doubt that I am the better man,” Wilder said when asked why he was taking the fight.

“Some people think I got a lucky escape and I want to prove that wrong. But also because Luis has spent his career being denied opportunities by the other top heavyweights. And still is.

“So I want to give him, at 40, this present of a last opportunity of a big pay-night.”

Wilder also said he shares a bond with Ortiz, with both fighters having young daughters with serious conditions. Wilder’s daughter Naieya was born with spina bifida, while Ortiz’s daughter Lismercedes has a rare skin condition epidermolysis bullosa.

“I know personally how hard it is and how much it takes to take care of a child with a disorder,” Wilder said.

“It takes a lot of money, and it takes a lot of care, and I grew a great bond with him. So I have seen him as one of the top guys in the heavyweight division, and I want to bless him.

For the moment, Ortiz is putting aside any sense of kinship with Wilder, instead drawing attention to tactics by the champion he has described as “borderline criminal.

Asked if he had regrets about the outcome of their first fight, he replied: “No. I don’t necessarily see anything that could have been done differently on my part.”

But he added: “I think that some of the things that Wilder did and the antics that Wilder does could be dealt with differently this time around, the illegal things.

“Blows that he throws with the inside of his fists, punching down from the top of the head down and all kinds of craziness that he does, which makes it very difficult to get settled in any fight and quite frankly should be illegal and borderline criminal.”