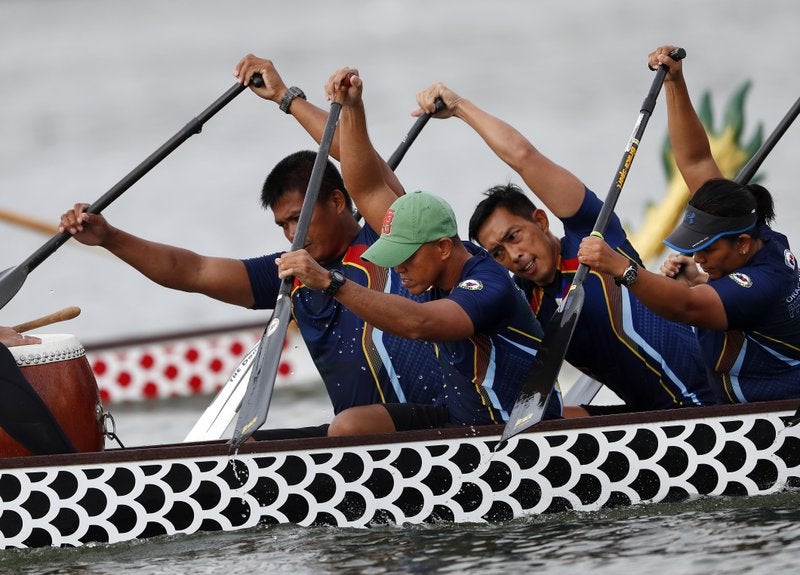 FILE – In this Thursday, Sept. 13, 2018 photo, a dragon boat crew from the Philippines paddles for the finish line during a 500-meter heat at the ICF Dragon Boat Championships,in Gainesville, Ga. (AP Photo/John Bazemore)

After conquering the world championships last year, the Philippine dragon boat squad is confident of making a splash against its regional rivals.

The national paddlers, who brought home five gold medals from the 2018 ICF World Dragon Boat Championship, are the heavy favorites to corner a majority of the six gold medals offered in the traditional boat race of the 30th Southeast Asian Games.

Team captain Hermie Macaranas, however, would rather focus on the real task at hand—showcase their ability to make the country proud on local waters.

“This is our chance to show what we are capable of. We want our kababayans to be proud of us,’’ said Macaranas, one of the finest paddlers of the national team and a top candidate for the Olympics, in Filipino.

Head coach Len Escollante said the gold medals would most likely come from the 1000m and 200m mixed standard races along with the 500m men’s four-seater, based on recent performances by the team.

“We are eyeing to get at least three of the six gold medals at stake,’’ said Escollante, whose women’s team recently delivered a silver and a bronze in the 10-seater 200m and 500m, respectively, of the 2019 ICF Dragon Boat World Cup in Ningbo, China.

“I’m glad that the world cup came at least a month before the SEA Games. We were able to assess and see the areas we need to improve on,’’ said Escollante, who considers Thailand, Indonesia and Myanmar as their toughest rivals.