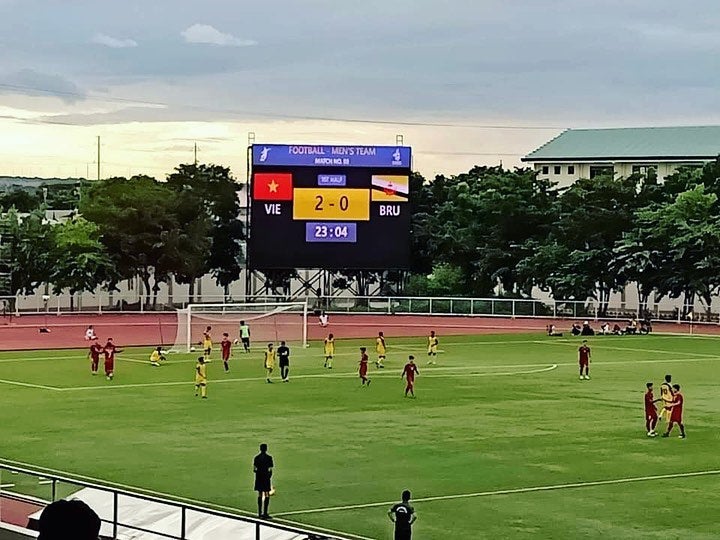 MANILA, Philippines—In the midst of the negative issues and problems surrounding some of the venues for the 2019 Southeast Asian Games, there’s one facility that stands out in its preparedness and completion.

Laguna’s Biñan City Football Stadium, which was built in 2015, is the home stadium of the Philippine women’s national football team and was venue of the Malditas’ first game against Myanmar last Tuesday which ended in a 0-0 draw.

As per report by a television network, the stadium boasts of well-run ticketing booths, portalets, baggage areas, an air-conditioned media center, and a VIP lounge for visitors.

Its 3,000-seating capacity is spacious enough that spectators aren’t close to each other.

Part of Biñan facility’s top-class distinction can be attributed to ESports International, the company that built the track at New Clark City.

Nice touch from those handling the venue in Biñan esp the Biñan City Government. Standees of our 🇵🇭women’s national team installed on the fence. A pleasant sight as you walk into the stadium. #SeaGames | @cedelfptINQ pic.twitter.com/UKmg7xBqGg

The football field itself is rated Fifa 2-star based on Kiwa ISA Sport B.V’s, a Fifa-accredited testing institute—assessment.

A massive LED scoreboard, 12 meters by nine meters, is also positioned behind one of the goals.

Reports swirled that Muslim athletes from the visiting countries were accidentally served pork dishes, but the Biñan local government had prepared halal-certified food.

Local police also ensured the safety and security of the visitors in the city.

According to the report, Biñan can also host the men’s competition if it needs to transfer from Rizal Memorial Sports Stadium.

The Philippines’ second match in the tournament is on Friday at 8 pm.

ADVERTISEMENT
Read Next
U-22 Azkals vow to come out a lot better in second game together
EDITORS' PICK
Senate, House bicam conference on proposed 2023 budget starts
Average daily COVID-19 deaths in PH down from 38 to 12 — OCTA
Bato Dela Rosa now having second thoughts about legalizing drug use
vivo’s coming to town to grant wishes with more holiday promos
House energy committee chair Arroyo bats for cheap electricity
The vivo X80 Series and vivo V25 Series is on everyone’s wishlist
MOST READ
LOOK: Vhong Navarro transferred to BJMP detention facility in Taguig
The Elephant Man in the Senate
Posh village as ‘shabu’ haven
LOOK: Zanjoe Marudo bonds with Ria Atayde, her family
Don't miss out on the latest news and information.