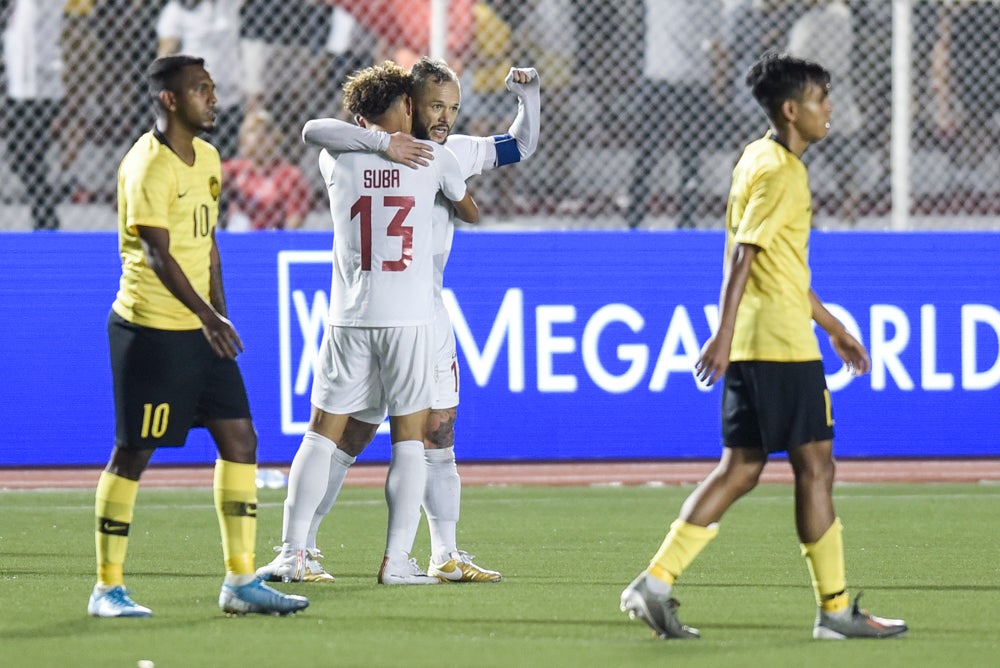 Young Azkals celebrate after a stunning win over Malaysia in the 2019 SEA Games. Photo by Sherwin Vardeleon/PHILIPPINE DAILY INQUIRER

MANILA, Philippines–Football, the sport that has been a source of heartbreak and disappointment for the Philippines in the Southeast Asian Games, delivered a magical night that will live long in the memory on Friday.

In a result reminiscent of the Philippines’ biggest victory in the competition 28 years ago, the Young Azkals overcame the favored Malaysia, 1-0, to keep their semifinal hopes alive at Rizal Memorial Stadium.

Over at Biñan Football Stadium, the Philippine women’s team leaned on a Sarina Bolden hattrick to dump Malaysia, 5-0, and secure its place in the next round.

The two matches took place simultaneously with both attracting huge crowds. And the Filipino athletes did not disappoint, delivering twin wins that propped up their bid for a medal in what is easily considered as the most popular event of the SEA Games.

The Young Azkals took the game to the 2017 silver medalists right from the opening whistle and their pressure was duly rewarded with captain Stephan Schrock’s 71st minute goal.

Schrock floated in a corner that swerved at the final minute and creeped into the back of the net. Amani Aguinaldo looked to have forced in the ball as it arrived in the area, but it was the indefatigable Schrock who was credited for the goal.

The result kept the Young Azkals in the mix for a semifinal berth with four points from three matches. They still have to play Timor Leste on Tuesday, but claiming the scalp of one of the powerhouses in the competition will go down as a remarkable achievement for coach Goran Milojevic’s team.

Interestingly, the stadium, scoreline and the opponent were all the same when the Philippine men’s team pulled off its biggest win in the competition in 1991. Back then, the Malaysians arrived at Rizal Memorial as defending champions, but they fell in an upset made possible by Norman Fegidero’s goal. All but one of the players in the current squad weren’t even born yet when the Philippines hammered out that win.

But this was a team that is teeming with young talents spearheaded by an irrepressible leader in Schrock. And with an energetic crowd of 6500 backing them up, the Young Azkals sent a strong message with a performance to remember.

Bolden bagged her hattrick right before halftime, while De La Salle’s Shai Del Campo was also on the scoresheet in an emphatic win for coach Let Dimzon’s side.