Azkals’ Edison Suerti looking for more than a medal 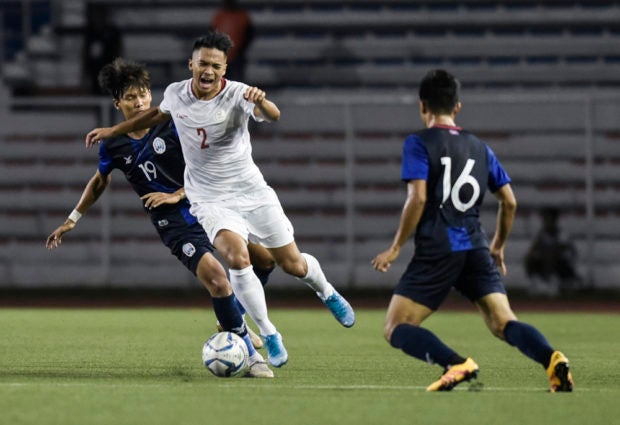 When Philippines’ defender Edison Suerti stepped on the Rizal Memorial Stadium pitch wearing the Philippines jersey for the first time in his home country on Monday, he was holding out hope that the spotlight on the Southeast Asian Games would lead to something more than just a glorious moment for the Young Azkals.

Suerti, 20, has not seen his biological parents as he was only 18-months-old when Norwegian musicians Jens and Lena Mordal brought him to Molde, Norway, from Children’s Shelter in Cebu.

“I hope she’s proud of me when she sees me,” said Suerti, referring to his mother, who gave birth to him in Cotabato City.

“I don’t know all of the details, but my biological mother brought me to the orphanage in Cebu. I was told that probably she didn’t have the resources to take care of me.”

Suerti, who took the Mordal surname and added Elias to his first name when the adoption was legalized, is slowly retracing his roots through the sport introduced to him by Jens almost 15 years ago.

“I was really lucky I was given a brand-new life in very good conditions,” the Young Azkals rightback said. Suerti has two other siblings also adopted by the Mordal couple in Johannes, 17, and Milla, 11.

Suerti was five when Jens took him to a local club, Traeff, to learn and enjoy the game. He also took in his adoptive parents’ passion for music, playing the guitar and piano.

“I fell in love with football because of my father, Jens. He was passionate about the game.”

But he always reverted to his first love—football—as he embarked on a career that has taken him to the youth team of one of Norway’s biggest clubs in Molde, where he had the opportunity to train under now Manchester United coach Ole Gunnar Soljkaer. He signed with another club, Brattvag, early this year when he got the call from Azkals coach Scott Cooper to join the camp in March.

But Suerti begged off from the camp to focus on his club commitments. “It came at a really difficult time because I just signed for the club and it’s one of those times where you have a huge chance of making things happen,” he said.

Another call came in June for the camp in China with Suerti joining the Azkals this time and ultimately parting ways with Brattvag, convinced that his time with the national team would lead to better opportunities.

Now without a club, Suerti may also have his biggest break with this SEA Games stint. He said felt right at home as he walked out of the changing room to the pitch where close to 3,000 fans watched the Philippines draw against Cambodia, 1-1, in their first match.

“When I walked out and sang the national anthem facing the flag, I felt goosebumps,” he said. “Of course, I’ve lived in Norway almost all my life but something just felt natural.”

Suerti, of course, hopes to see the Azkals reach the semifinals for the first time in the tournament. And “with the right amount of focus and desire, we can put up a fight.”

“Every match is like a final for us now,” added Suerti, after the Azkals only have one point to show from their first two matches.

But Suerti said his appearance in the SEA Games may just give him a chance to finally meet his biological parents.

“If I have a chance to meet them, I want to have a chat with them on how it was back then and what we’re the reasons why they made that decision,” said Suerti.