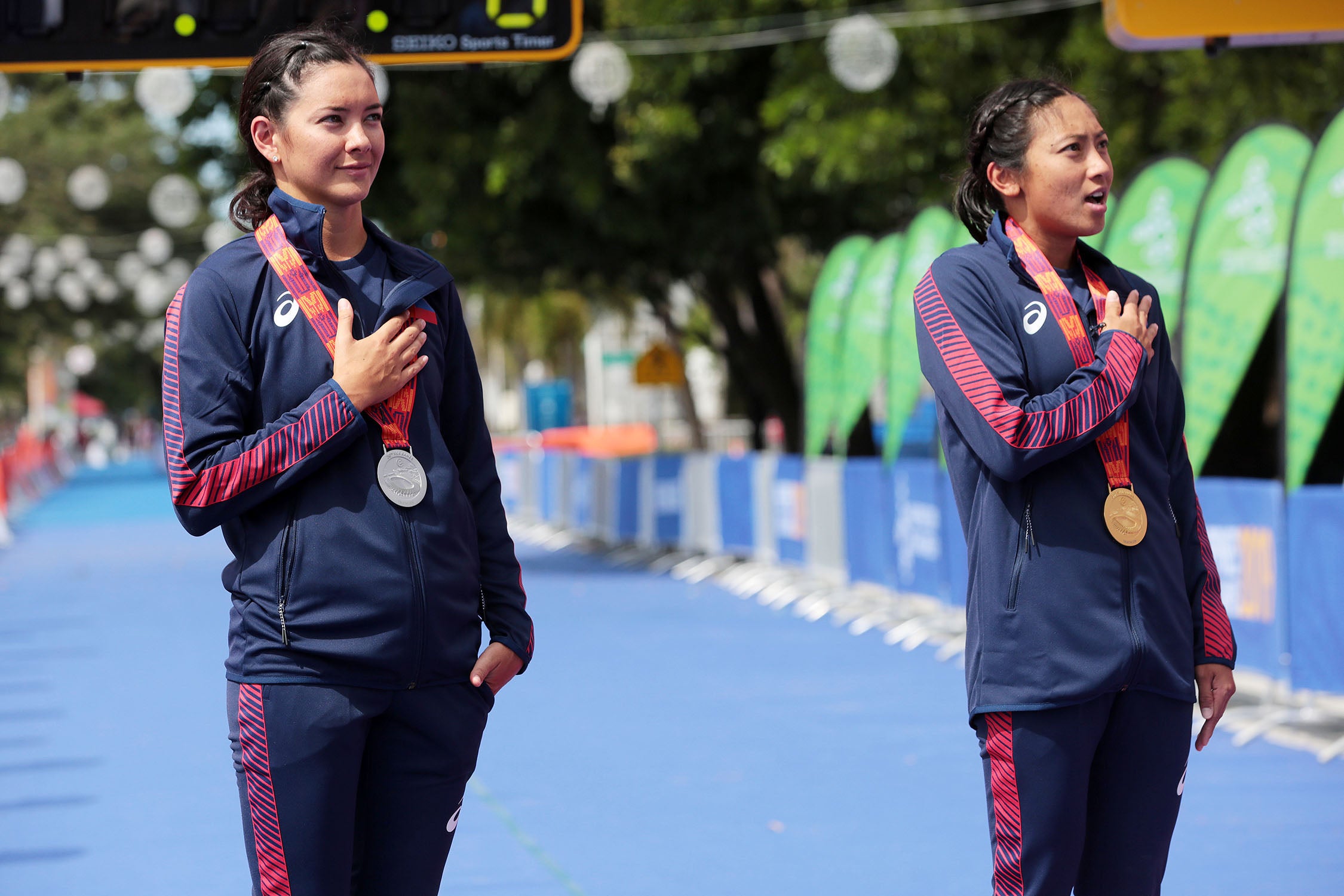 This cheer reverberated throughout the bike and run course of the women’s triathlon in the 30th Southeast Asian Games here on Sunday. But which Kim were the spectators cheering for?

One is a statuesque commercial model who became the glamor girl of Philippine triathlon when she burst into the scene as an age-grouper in 2012. The other is the tiny but scrappy kid from Laguna who grew up fighting the odds to get to where she is now—on top of the podium.

Together, they gave the Philippines a 1-2 sweep of the women’s triathlon on the first full day of competition in the SEA Games on Sunday.

But beneath the euphoria of the Filipinos’ third straight 1-2 finish in the SEA Games triathlon is a simmering personal rivalry that has fueled each other’s drive. Under one flag, they are teammates, but Kim Mangrobang and Kim Kilgroe are each other’s arch-rival. They will go at each other’s throat if given the chance.

The Kim vs Kim cold war is the worst-kept secret in the triathlon community. According to coaches, officials and supporters: They don’t show up in the same training session and avoid each other like the plague.

This personal competition became evident midway through the women’s triathlon when Mangrobang tucked behind Kilgroe through most of the 40-kilometer bike leg, which proved to be crucial to her breakaway in the 10-km run leg.

Saving one’s legs on the saddle is the key to a good run–and a good race–in triathlon.

It’s going to be 1-2, said national team coach Ani de Leon before the start of the race. Which Kim gets the gold depends on how well they work on their strengths and how well they execute their game plans, she said.

As a kid, Mangrobang grew up as a swimmer in Laguna while Kilgroe is a confessed non-swimmer who took up the sport as an adult, but the latter has developed into a strong swimmer. Kilgroe, a Fil-Am who used to shuttle between California and Manila, is now even stronger on the bike.

‘’She is now a strong time trialist on the bike, and the key to her winning is how well she can take advantage of that and shake off the other Kim,’’ De Leon said. “But the other Kim may not be as strong a biker as Kilgroe, but she can stick to her draft and stay with her. When it comes down to the run, I think Mangrobang has the advantage.’’

That’s exactly how things played out on Sunday. Mangrobang was off the water first, but Kilgroe was close behind. On the bike, Mangrobang stuck to Kilgroe’s draft in this draft-legal race, and with fresh legs off the bike, Mangrobang ran away with the gold. Kilgroe, having done all the work in the bike leg, had nothing left for the run to challenge her teammate.

Was this fair? Kilgroe didn’t say.

“I just ran my race according to plan. I did the best I could and I executed my game plan well,’’ she said. In the post-race conference, she refused to comment if Mangrobang benefitted from her effort.

It was evident that Kilgore tried many times to shake off Mangrobang, attacking repeatedly, but to no avail as Mangrobang held on to Kilgroe’s wheel.

Mangrobang likewise said she ran her race as planned – which was to stay as close to her teammate as possible in the swim, draft behind Kilgroe throughout the bike, and pour it on in the run leg.

Was this fair? Mangrobang’s backers said that’s how races in the standard-or Olympic-distance go. Drafting is legal and almost always, the stronger runner prevails.

In the Asian Games in Palembang last year, Mangrobang fell behind in the bike as Kilgroe pulled a big group of bikers ahead with a furious pace that prevented Mangrobang from catching up.

A Filipino team official said this not good teamwork, but he justified Kilgroe’s effort, saying it had always been her nature to push hard in the bike leg. A furious Mangrobang rallied in the run and passed her teammate to finish seventh. Kilgroe finished ninth.

Another official said triathlon in the international stage is oftentimes a team sport and teammates must help each other, especially in the bike leg, for the team’s greater good.

He cited the sacrifice of John Leerams “Rambo’” Chicano in 2017 when he towed the struggling Nikko Huelgas through the bike leg that allowed Huelgas to recover and go on to win the gold. Chicano, spent from the effort to nurse Huelgas back into the race, settled for the silver.

Last Sunday, it was Chicano’s turn to win, this time with the help of teammate Kim Remolino, who shared the pacing load during the bike leg to help turn back the challenge of Indonesia’s Muhammad Ahlul Firman.

Both Kims are aiming to earn points for an Olympic qualifying berth. Mangrobang is ahead in the rankings but Kilgroe is working just as hard to get there. The race to the Olympics is the new phase of the cold war.