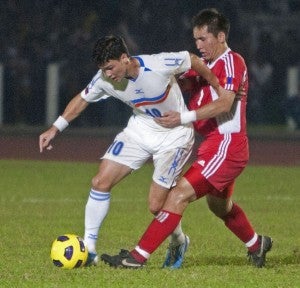 KATHMANDU—The Philippine Azkals came to this hills-framed valley in the Himalayas for the AFC Challenge Cup with modest expectations.

Proof of that is their March 14 booking for a return flight to Manila.

Now, they could prolong their stay and, more importantly, rewrite the history of Philippine football with a victory against Tajikistan on Tuesday in their final group B match at the Halchowk Stadium here.

A spot in the semifinals is at stake in the 3 p.m. duel (5:15 p.m. in Manila) and while the Tajiks are in familiar territory, the Azkals have never been this close to making the knockout stage of the biennial tournament for Asia’s emerging football countries.

“It’s up to us now to make history,” said star striker Phil Younghusband, who banged in two goals in the 2-0 blanking of India—a feat labeled as one of the biggest upsets of the tournament.

More importantly, the win kept the Azkals’ semifinal ambitions alive after a 0-2 loss to North Korea in their first match last Friday.

Both the Philippines and Tajikistan are level on points and on goal difference and a draw will pave the way for a penalty shootout to determine which team secures the other semifinalist from the group.

North Korea has already clinched the first Final Four berth after a 2-0 victory over Tajikistan Sunday.

Azkals manager Dan Palami is optimistic the Azkals can pull through.

“We have always been worried because of the not-so-ideal preparation that we have, Palami said. “But I’m quite surprised with the team, having the spirit and the heart to represent the country.

“Our goal is still the same, which is to reach the semifinals.”

Tajikistan, though, has been a perennial contender in the tournament, winning the inaugural edition in 2006 and reaching the final in 2008, while the Philippines only made the main tournament this year, needing to hurdle prequalifying and qualifying events.

The two teams actually fought to a scoreless draw in the AFC Challenge Cup qualifiers in Iloilo in May 2008, but Younghusband, who along with goalkeeper Neil Etheridge played in that match, said a lot has changed for the Philippines.

“We’re stronger than in 2008, so we have every right to be confident,” said Younghusband.

The Azkals were given a few hours to go around the dusty, bowl-shaped center of the Kathmandu Valley Monday, while the Younghusband brothers were booked for a series of television interviews, including one from an international football show whose crew came all the way from London.

But they returned to training late in the afternoon just as the Group A matches were about to finish.

Turkmenistan and Palestine have the inside track in the race for semifinal berths in the other group.