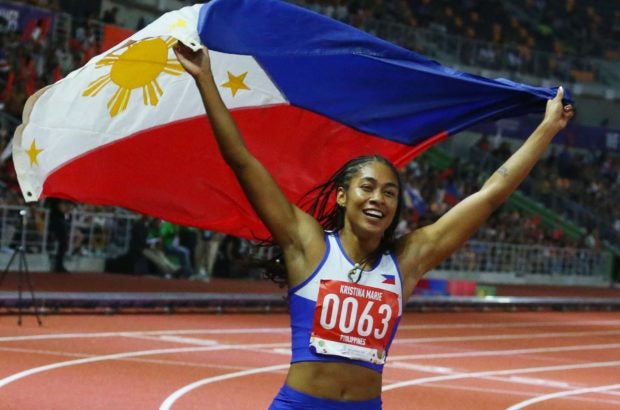 NEW CLARK CITY—Kristina Knott will have to make the Olympic cut some other time.

For now, she prefers to bask in the adulation from her by new-found fans.

“My debut was the Asian Games; nobody knew me back then,” said the dread-locked Filipino-American after ruling the women’s 200-meter Saturday night in the 30th Southeast Asian Games.

How the times have changed, some literally.

Knott is well-known now, with some 10,000 fans inside the New Clark City track and field stadium cheering for her live.

And she responded by resetting the time records of the biennial meet.

Knott had already reset the SEA Games record (23.30 seconds) in the morning when she ran 23.07 seconds. The Olympic cut off was a bit faster at 22.8 seconds.

The 5-foot-5 Knott broke away in the final bend some 120 meters from the finish charging to the line to the beat of the hometown crowd rooting for her.

She improved on her morning time, clocking 23.01 seconds to win the gold over an outmatched field and breaking the biennial meet’s record a second time.

But because she left everyone behind too early, the University of Miami standout didn’t have a pacekeeper to keep her on track for the Tokyo Olympics qualifying time.

Vietnam’s Le Thu Chinh settled for silver in 23.45, while Singapore’s Veronica Pereira got the bronze in 23.77.

Knott will next see action in the centerpiece 100m dash on Sunday.