DeRozan, Spurs rally from 18 down to beat Raptors 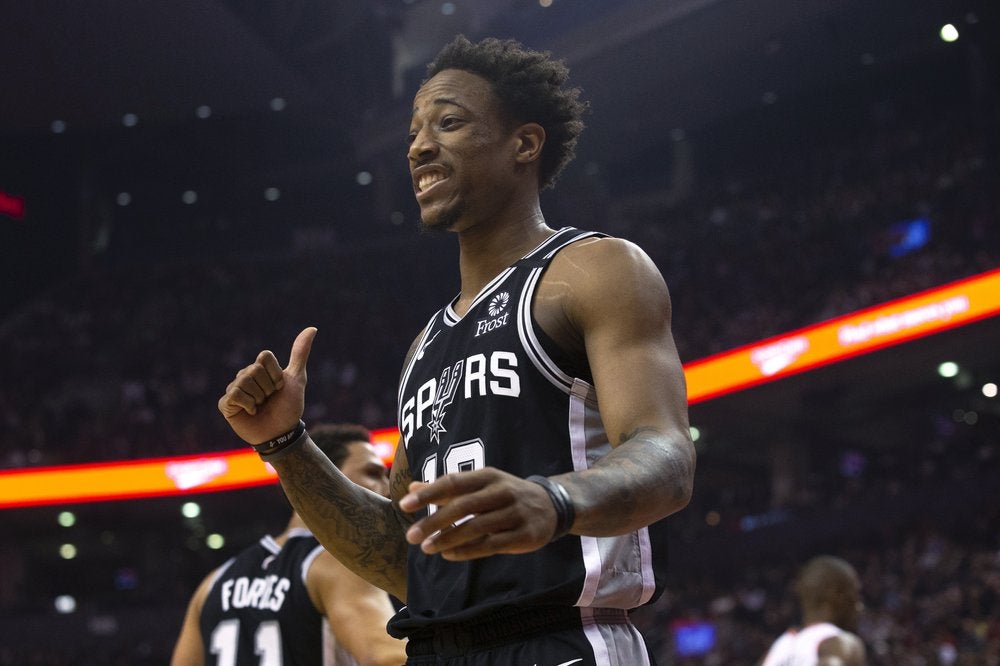 San Antonio Spurs’ DeMar DeRozan shares a joke with the Toronto Raptors bench during the first half of an NBA basketball game in Toronto on Sunday, Jan. 12, 2020. (Chris Young/The Canadian Press via AP)

TORONTO — DeMar DeRozan got another warm welcome in Toronto, and then helped San Antonio top the struggling Raptors.

“Being down what we was down and still being able to fight back and pull it out was big, especially on the road,” DeRozan said.

San Antonio used a big fourth quarter to win for the third time in four games. Derrick White scored 13 points for the Spurs, and LaMarcus Aldridge had 11. DeRozan also collected eight rebounds and four assists while topping 20 points for the 11th straight game.

“He’s been huge,” White said of DeRozan. “Creating for us, scoring, doing just about everything. He made big plays down the stretch.”

Siakam broke the tie by making the second of two free throws with 41 seconds left, but Marco Belinelli replied with a 3 for the Spurs, making it 103-101 with 28 seconds remaining.

After a Toronto timeout, Siakam missed a shot that would have tied the game. San Antonio’s Lonnie Walker IV grabbed the rebound, Lowry fouled DeRozan, and the former Raptors star pushed the lead to four points by making a pair from the line.

Lowry replied with a deep 3, cutting the deficit to one, and Aldridge missed a pair of free throws with four seconds left. But Siakam’s long 3-pointer bounced off the backboard at the buzzer.

DeRozan missed his first three free throws but made 11 straight the rest of the way. He didn’t score until 1:25 remained in the first half and attempted just three shots in the first two quarters, but made six of nine attempts in the second half.

Playing in Toronto as a visitor for only the second time, DeRozan received loud applause when he was introduced before the game. Fans rose for a standing ovation when DeRozan was honored with a tribute video during a first-quarter timeout, part of Toronto’s ongoing 25th anniversary celebrations.

“It’s amazing to be able to get that much recognition,” DeRozan said. “It never gets old.”

When the Spurs visited Toronto last February, DeRozan turned the ball over in the final seconds, leading to a go-ahead dunk by Kawhi Leonard.

This time, there were no miscues in the final moments.

“I’m pretty sure it means a lot to him to come back here and get a win,” said Spurs center Jakob Poeltl, DeRozan’s teammate in Toronto and San Antonio. “Last year we were really close, we ended up losing a close game. This year it was a close game again and we ended up winning it.”

Toronto is 4-6 since a five-game winning streak ended with a loss at Indiana on Dec. 23. The Raptors blew a double-digit lead in the fourth quarter against Portland last Tuesday, and needed overtime to win at Charlotte the following night.

San Antonio’s comeback spoiled the returns of Siakam and Powell, each of whom had missed 11 games since a Dec. 18 win at Detroit. Powell scored 20 points and Siakam had 15, including 12 in the first.

“Obviously happy to be back,” Siakam said. “Definitely a little tired but I’ll take that after being out for a month.”

While battling San Antonio’s Bryn Forbes for a loose ball in the third, Lowry landed heavily on Toronto’s baseline, just in front of where his family was seated. Lowry got up and gave his son a kiss on the cheek, then returned to the court.