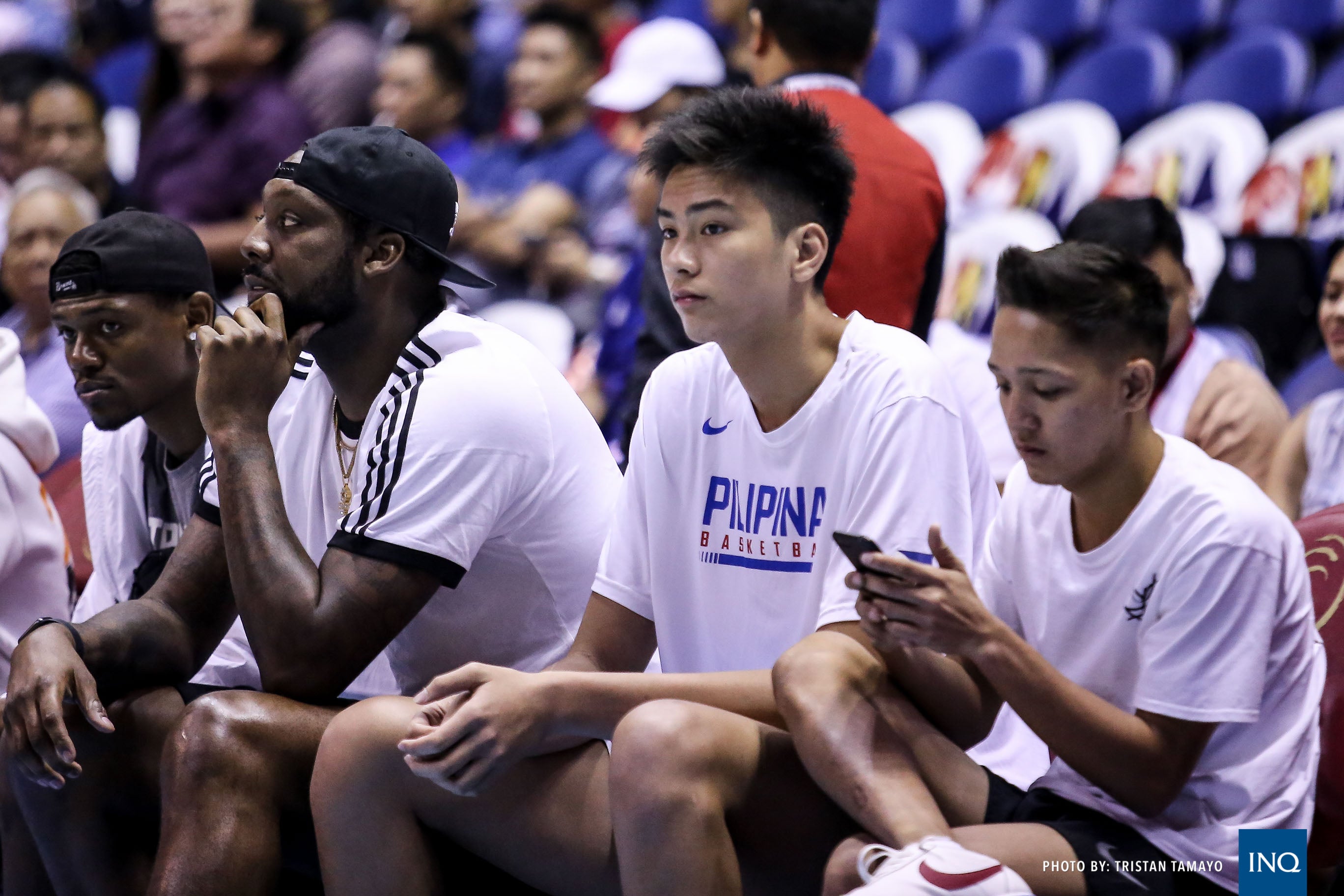 FILE – Andray Blatche and Kai Sotto sit courtside during a PBA game between Barangay Ginebra and TNT on August 1, 2019, at Araneta Coliseum in Cubao. Photo by Tristan Tamayo/INQUIRER.net

MANILA, Philippines — Andray Blatche is hoping for redemption when he gets to lead a loaded Mighty Sports squad set to compete in the Dubai International Basketball Tournament later this month.

“Definitely, what happened in China left a bad taste in a lot of people’s mouths,” he said after the team’s practice in Makati on Monday, referring to Gilas Pilipinas’ last Fiba World Cup stint.

“I don’t expect to come back here without getting a championship in Dubai. We got the right pieces, the right players and a good situation going on,” he added.

Mighty Sports leaves for the Emirates on January 21 two days before the competition tips off.

The 6-foot-11 center was also ecstatic on the thought of playing alongside Sotto.

“It’s basically off [his] smartness and [his] feel for the game—the spaces, the cuts, and the screens. He should be good.”

Mighty Sports hopes to improve its third-place finish in 2019 where they fell to Lebanese powerhouse Al Riyadi in the semifinal.

“I think it’s a great mix. I think they did a wonderful job putting this team together. All the guards and the bigs. It’s going to be exciting and fun,” said Blatche.

Sotto will be joining Blatche and the rest of Mighty Sports in Dubai as he is fulfilling prior commitments in the United States.

ADVERTISEMENT
Read Next
All that Jazz: The ex-Buddhist monk meditating his way to golf’s Masters
EDITORS' PICK
2 Chinese nationals arrested in raid on another unlicensed COVID-19 hospital in Pampanga
Duterte approves Metro Manila’s shift to GCQ from June 1 to 15
SM prepares for ‘safe malling’
NBI, Immigration to join hunt for ‘underground’ medical clinics
Notice of 2020 regular meeting of stockholders June 18, 2020
Leveling up your ‘lutong bahay’ with the kitchen companion you never knew you needed
MOST READ
Duterte approves Metro Manila’s shift to GCQ starting June 1
Revillame tells Roque: ABS-CBN is in my heart despite being in rival network
NCR is ready for GCQ — Palace
South Korea virus cases make biggest jump in 50 days
Don't miss out on the latest news and information.