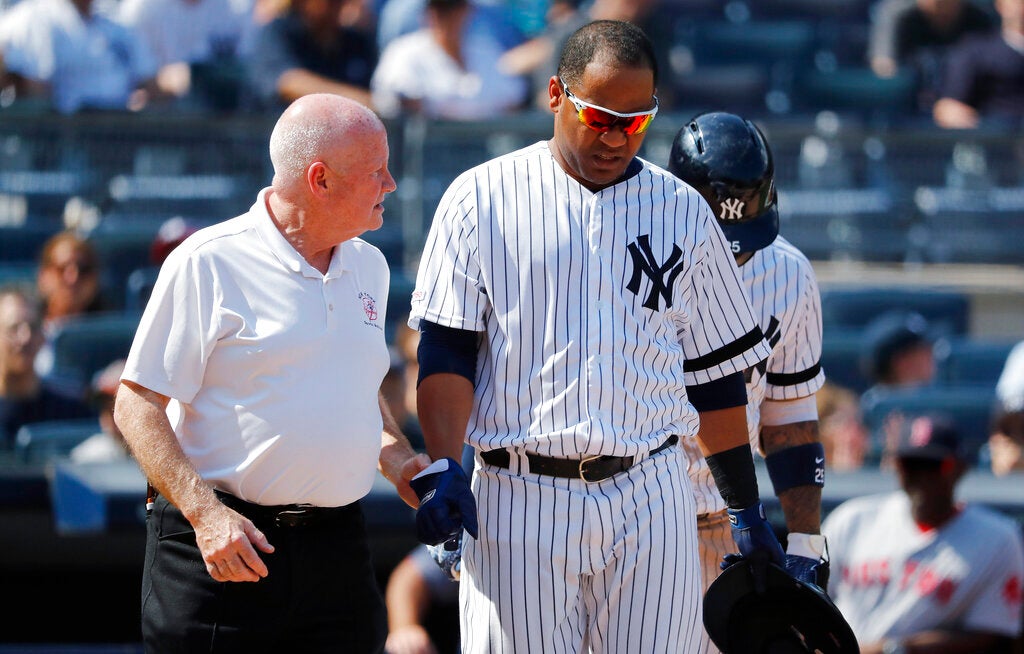 FILE – In this Aug. 3, 2019, file photo, New York Yankees’ Edwin Encarnacion is helped by trainer Steve Donohue after being hit by a pitch thrown by Boston Red Sox’s Josh Smith during the eighth inning of a baseball game in New York. Encarnacion suffered a broken right wrist. Donahue has been promoted to the newly created role of director of medical services for the Yankees. The 63-year-old, starting his 42nd year with the team, had been head athletic trainer for eight seasons after working from 1986-2011 as assistant athletic trainer to Gene Monahan. (AP Photo/Michael Owens, File)

NEW YORK — Eric Cressey thinks some injuries can be prevented. After a season in which medical updates overshadowed scouting reports, the New York Yankees hope so.

Cressey was hired by the Yankees in the new role of director of player health and performance, a move made after New York had 30 players make a combined 39 trips to the injured list last year. New York set a big league record for sidelined players, topping the 28 on the 2016 Los Angeles Dodgers.

“You always want to separate bad processes from bad outcomes,” Cressey said during a conference call Tuesday. “Players are going to be hit by pitches, but there are definitely things that we can do on the processes side of things to provide a level of individualization in the way that we assess players, in the way that we listen to players and solicit their feedback on what’s worked for them.”

The 38-year-old founded Cressey Sports Performance in 2007 and will continue as president of the company, which specializes in kinesiology and biomechanics and maintains facilities in Hudson, Massachusetts, and Palm Beach Gardens, Florida. His clients have included Washington Nationals ace Max Scherzer, New York Mets pitcher Noah Syndergaard and other major leaguers.

Cressey does not think there will be any issues working with players on teams other than the Yankees.

“The number of major league hitting coaches that work with major leaguers from other teams in the offseason is borderline astounding,” he said.

Cressey expects to make five visits of two-to-five days to the Yankees before their March 26 opener. He will attend most homestands and all trips to Boston’s Fenway Park. He’s already been at work attending to what he called “the nitty gritty” of overhauling player assessment.

“There is a lot of behind-the-scenes systems work that we’re creating and already have created to help us extend to the minor leagues and just to communicate with the front office,” Cressey said. “And special challenges, whether that’s relating to trades or looking longer term in terms of finding competitive advantages in the industry.”

Cressey said Yankees director of baseball operations Matt Ferry visited Clemson football, the NBA’s San Antonio Spurs and Brooklyn Nets, and also the Mayo Clinic in determining how the team wanted to restructure training. Cressey said he was connected to the Yankees by bullpen catcher Radley Haddad, a friend for many years.

“He was really the front line of bringing video analysis to baseball,” Cressey said. “It was obviously very mainstream when everyone has an iPhone with incredible resolution and can go slow mo. It wasn’t that easy back in 2008, 2009.”

In other moves, Steve Donohue was promoted to the newly created role of director of medical services. The 63-year-old, starting his 42nd year with the team, had been head athletic trainer for eight seasons after working from 1986-2011 as assistant athletic trainer to Gene Monahan.

Michael Schuk, 37, was promoted to director of sports medicine and rehabilitation following six seasons as the team’s physical therapist and assistant athletic trainer.