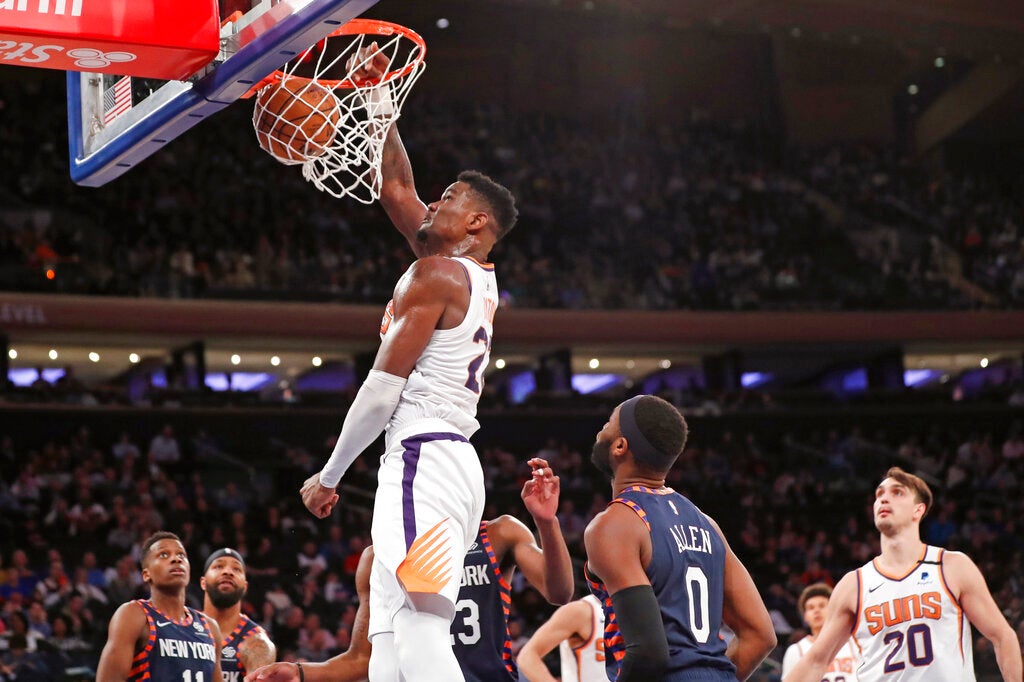 NEW YORK— Deandre Ayton and the Phoenix Suns are picking up some momentum halfway through the season.

Ayton had 26 points and a career-high 21 rebounds, and the Suns pounded the New York Knicks 121-98 on Thursday night.

“We are only out there for one another,” Ayton said. “Without team success, you are not going to reach your individual accolades. That is big on this team and we feed off each other.”

New York lost for the seventh time in eight games, and rookie guard RJ Barrett departed in the third quarter with an ankle injury. Barrett, the third overall pick in last year’s draft, was using crutches after the game.

“It hurts. I never really been hurt before,” Barrett said. “I don’t remember the last time I missed a game. But, we play so many games it was bound to happen.”

Phoenix shot 51% (47 for 92) from the field and placed five players in double figures in its third win in four games. Devin Booker scored 29 points, and Ricky Rubio had 25 points and 13 assists.

“Everybody wants to see each other’s success,” Booker said. “We are working every day. We are not getting complacent. After a win, we are not satisfied. We have goals in-house that we keep as a team that we want to reach.”

Ayton, the No. 1 overall pick in the 2018 draft, was 11 for 15 from the field in his 11th game this season. The 6-foot-11 center played on opening night, and then served a 25-game suspension for violating the league’s anti-drug program after testing positive for a diuretic. He sprained an ankle in his return to the lineup Dec. 17.

Julius Randle led the Knicks with 26 points. Marcus Morris Sr., who returned to the starting lineup after missing five games with a sore neck, had 17 points, and Mitchell Robinson finished with 12.

The Knicks pulled within four on Morris’ jumper early in the third before the Suns pulled away again. Dario Saric’s layup made it 79-66 with 6:40 left in the quarter.

“We were behind plays all night,” Knicks coach Mike Miller said. “We allowed a good team to take basically advantage of what they wanted to do. We didn’t take anything away.”

Saric scored 11 points for Phoenix, which led by as many as 29 in the final quarter.

“This is the team we want to be,” coach Monty Williams said. “Holding a team under 100 points is really hard and 31 assists is phenomenal. It’s a really good win for us. All of them are, but that’s a big-time win because of the way we did it.”

Suns: Kelly Oubre Jr. is in concussion protocol and missed his first game of the season. Only Saric and Mikal Bridges have played in all 41 games for Phoenix. … Rubio returned to the starting lineup after missing Tuesday’s game at Atlanta for personal reasons.

Knicks: Portis is the only Knick to play in every game this season. … Dennis Smith Jr. missed his 11th straight game with a left oblique strain. He last played vs. Washington on Dec. 23. … Reggie Bullock, who shot 0 for 8 during Tuesday’s loss to Milwaukee, sat out with a sore neck. … G Frank Ntilikina returned after missing two games with a sore groin.