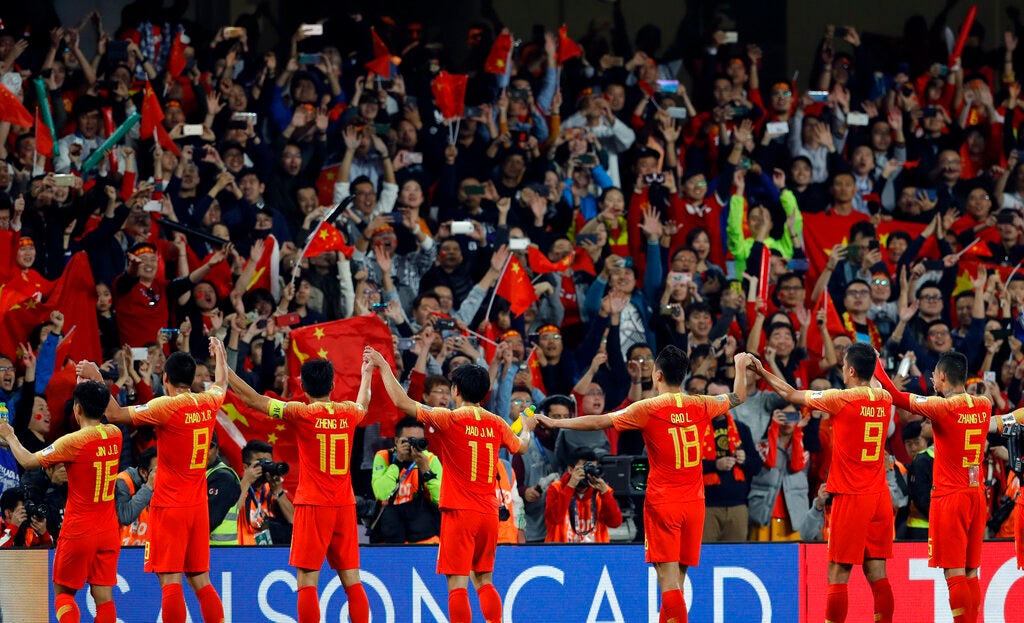 FILE – In this Jan. 20, 2019, file photo, Chinese players greet supporters at the end of the AFC Asian Cup round of 16 football match between Thailand and China at the Hazza Bin Zayed stadium in Al Ain, United Arab Emirates. (AP Photo/Hassan Ammar, File)

Barely weeks into the near year, Chinese football’s “2020 Action Plan” is in tatters after another international tournament failure that ended with players leaving the field in tears after losing all three games without scoring a goal.

In 2018, China’s Football Association, the CFA, set a number of targets for the men’s national teams at various age levels. None have been met.

The latest failure is missing out on qualification for the 2020 Olympics in Tokyo. To book a ticket to Japan, China needed to finish in the top three of the under-23 Asian Championships, underway in Thailand. Instead, China placed last in its group with no goals and no competition points.

Other objectives that have not been achieved include reaching the semifinals the 2019 Asian Cup, qualifying for the U-17 and U-20 World Cups and being ranked in the top 70 by football’s international governing body. China is 76th this week in FIFA rankings. This is all despite significant financial investment in recent years by Chinese Super League clubs on foreign talent and by the government at the grassroots level.

“I am not sure what is happening because China has been investing in youth football and the new generations are coming, but low quality is still a problem,” former Beijing Guoan striker Dejan Damjanovic told The Associated Press. “They need to keep investing to try and send the best young players to Europe to develop. That’s the only chance for Chinese football.”

The latest setback was not completely unexpected, as China had lost eight of its previous nine games at the U-23 championship. But it was more painful than past failures because that group of young players had a better preparation than previous eras.

In 2017, the CFA introduced rules that forced Chinese Super League clubs to give young domestic players playing time and in 2018 it appointed an elite coach. Guus Hiddink, the former Real Madrid coach who led South Korea to the 2002 World Cup semifinals, was tasked with leading China to Tokyo. Hiddink was fired last September after poor results in warm-up matches.

“After five years of the country’s football revolution, one would have expected to see more tangible progress being made particularly within younger age categories,” said Simon Chadwick, professor of Sports Enterprise at Salford University who has worked on education delivery with the CFA and who writes about Chinese soccer. “Hence, the country’s recent Under-23 performance does not bode well for the success of China’s strategy. … It is hard for observers to conclude anything other than the country’s national teams are still under performing.”

There was some bad luck involved. Under Hiddink’s replacement, Hao Wei, China lost 1-0 to South Korea with a goal in stoppage time after star player Zhang Yuning had been ruled out of the tournament with broken toes. The 2-0 loss to Uzbekistan wasn’t close, and the misery was complete with a 1-0 loss to Iran.

“We will not give up,” Hao said. “I believe that our dreams will one day come true.”

Attention in China now turns to the resumption of qualification for the 2022 World Cup. The senior national team is now coached by Li Tie, who replaced Marcello Lippi this month. Lippi, who led Italy to the 2006 World Cup title, quit in November after a loss to Syria left China eight points behind in second with four group games remaining.

Only the group winner is guaranteed a place in the next stage of qualification. China has only appeared at one World Cup, losing all three group games in 2002 when the tournament was co-hosted by South Korea and Japan.