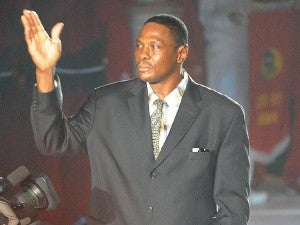 A week after missing his flight back to the United States, former PBA great Billy Ray Bates resurfaced and apologized for a recent assault incident that got him sacked from the AirAsia Philippine Patriots.

Bates denied the allegations of the Patriots management that he missed several team practices or reeked of alcohol when he was present.

But it seems as if the Hall-of-Fame import may have burned up whatever second chance was offered him.

“The team has everything on record,” team manager Erick Arejola told the Inquirer Saturday from Kuala Lumpur. “We have team officials and other players reporting to us several incidents of his misconduct. For us, we gave him a second chance but he blew it.”

Nicknamed as the “Black Superman,” Bates was hired as the Patriots’ skills coach in the ABL following his induction in the PBA Hall of Fame last October.

It as an opportunity for redemption for Bates,  who battled with alcohol and drugs and even spent several years in prison in the US after his legendary stint in the PBA in the 1980s.

But early this month, the Patriots fired Bates “for repeated misconduct and acts detrimental to the team and to the league.”

“I didn’t have any issues,” said Bates. “When it’s time for us to do basketball camps, to get people to come and support the Patriots, I would get out of my bed at 5 o’ clock in the morning and travel three hours to give a message to kids.”

Bates, though, admitted he wasn’t in a “clear mind” in a recent incident in his condominium where he reportedly assaulted a transsexual, whom he thought was a woman.

“I would like to apologize to my wife, to my family, to the sports world and most of all to my fans, that my conduct that night was inappropriate,” said Bates. “I wasn’t in my clear mind. It’s something that has happened and there’s nothing I can do about it except speak out on it.”