Chicharito seizes chance to be center of the Galaxy | Inquirer Sports

Chicharito seizes chance to be center of the Galaxy 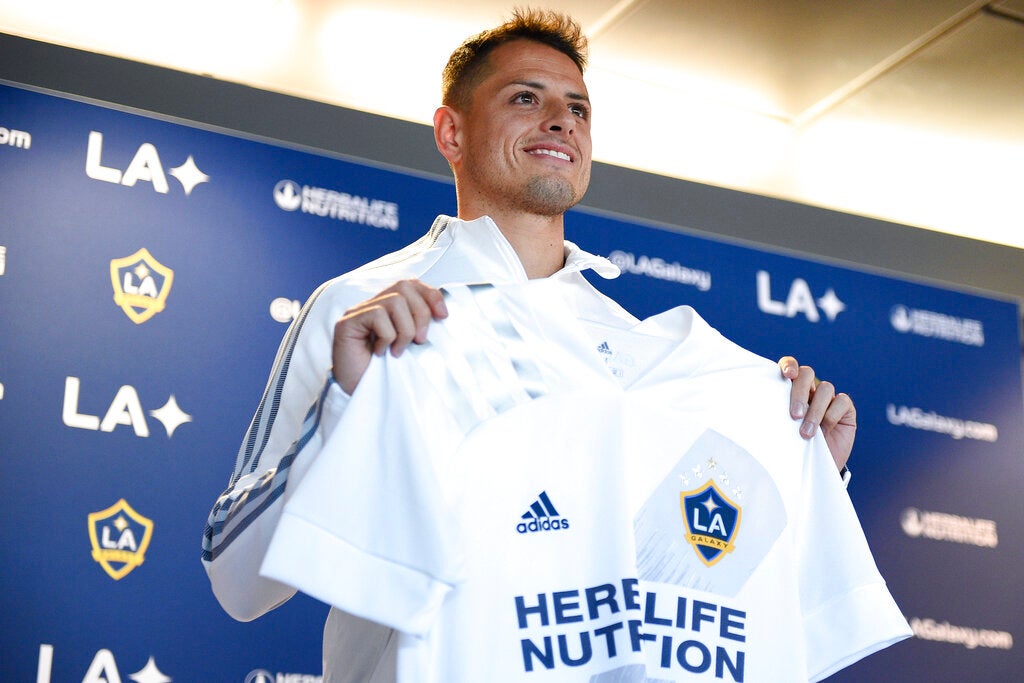 CARSON, California — Javier Hernández has been to the top of the soccer world. He spent the last 10 years in Europe’s top leagues, winning trophies and representing some of the biggest clubs.

Yet from Manchester United to Sevilla, the Mexican striker better known as Chicharito often struggled to get consistent playing time.

Whether his path was blocked by Wayne Rooney’s brilliance or a manager’s lack of confidence in him, Hernández rarely got to show his full talent. When he wasn’t fighting injuries, he often served as a key backup instead of a centerpiece.

That’s the main reason the 31-year-old Hernández agreed to return to North America with the LA Galaxy, who introduced their latest superstar acquisition Thursday.

Chicharito is the center of the Galaxy now, and he is thrilled.

“I just want to play,” Hernández said in his distinctively rapid bilingual delivery. “This league and this team, it’s giving me that opportunity (to show) that I’m one of the best players around the world. That’s why they want me to be here, to try to improve this league and this team. … It’s a win-win-win-win. I know I’ll be on the pitch most of the time if I keep working hard for the club. I’m going to be doing what I loved since I was in the belly of my mother.”

With Chicharito playing in only nine games so far this season for Sevilla, the timing was finally perfect for this long-rumored combination of player and club.

While the Galaxy made major improvements and reached the playoffs last season behind Zlatan Ibrahimovic’s franchise-record 30 goals, they desperately needed another topflight striker at the center of coach Guillermo Barros Schelotto’s attack when Ibrahimovic chose to return to Europe. Unlike most Major League Soccer clubs, the Galaxy have the money to go get elite talents, even in the January transfer window.

Hernández is well aware of the five-time MLS champions’ history of landing world-class players, reeling off his own list of favorites: “Robbie Keane. Steven Gerrard. Giovani Dos Santos. Jonathan Dos Santos. Zlatan Ibrahimovic. Landon Donovan. David Beckham, that’s the most iconic one, obviously. And then my name is over those. I’m just so blessed and so humble that I can be a part of all this.”

The speedy, shifty Chicharito likely fits Barros Schlelotto’s style even better than the hulking Zlatan, and the Argentine coach worked aggressively behind the scenes to land Hernández.

While Chicharito’s European career got off to a strong start at Manchester United under the guidance of Sir Alex Ferguson, he repeatedly struggled elsewhere when managers clearly didn’t believe in his abilities.

“More than anybody, Guillermo was involved in making it happen,” said Galaxy general manager Dennis Te Kloese, who has known Chicharito since the player’s childhood. “In the end, it had to do with Javier’s interest in being a part of this organization because he’s going to be in a team and with a coach who has a lot of trust in him.”

That clearly wasn’t always the case in Hernández’s European career. After four years in Manchester, Chicharito spent one season at Real Madrid and two more at Bayer Leverkusen, followed by two seasons back in the Premiership at West Ham. He scored goals at every stop, but never landed a permanent, consistent role matching his importance to the Mexican national team.

“I think what makes a lot of the world-class players even better is (how) they get used to their circumstances,” Chicharito said. “That’s something that I think I can bring. I want to show them that I’ve never been a selfish player — even though strikers are going to be in front of everyone, and I’m probably going to take the shot. I’m completely motivated.”

The top goal-scorer in the history of the Mexican national team already knows Los Angeles from many trips representing El Tri, which is invariably treated as the home team at the Rose Bowl by California’s massive Mexican-American population. Chicharito was greeted at the airport by hundreds of noisy fans when he arrived with his young family Wednesday night.

“I’ve been playing in this country since I was 16 years old,” Chicharito said. “I’ve won a lot of games here, and I’ve been treated with a lot of value and respect. I want that, and it’s coming from the best club in the USA. They came to get me, and that speaks of what they think of me.”

While the MLS is an undeniable step back in overall exposure and competition, Hernández knows he will deal with even more scrutiny on his home continent from the fans and Spanish-language media based in Los Angeles.

That extra scrutiny has already started: When Chicharito’s YouTube reality show released an episode Wednesday in which Hernández told his father that moving to the Galaxy was “like the beginning of my retirement,” fans and critics immediately seized on the term often used to denigrate MLS.

Chicharito explained himself with a smile before he held aloft his Galaxy jersey and formally began his next chapter.

“In my country, we love and we are, like, obsessed with drama and excess,” Hernández said, clarifying that he only meant he had finished the European portion of his career.