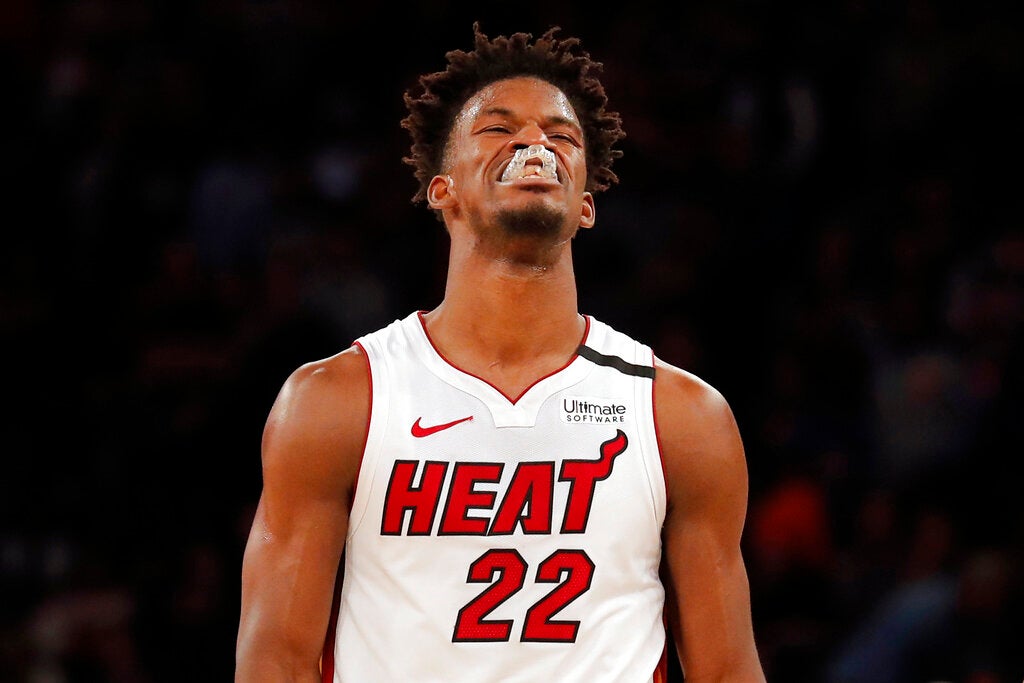 Miami Heat’s Jimmy Butler reacts after missing a shot during the second half of the NBA basketball game against the New York Knicks, Sunday, Jan. 12, 2020, in New York. The Knicks defeated the Heat 124-121. (AP Photo/Seth Wenig)

MIAMI — Erik Spoelstra has a suggestion for All-Star voting: Ditch the positions.

A day after the NBA revealed the starters for the Feb. 16 All-Star Game — two guards and three forwards from each conference — the Miami Heat coach said he wonders why the league still has players broken down by positions in the voting process for starters.

Heat forward Jimmy Butler came up short in the chase for one of the three East front-court spots. But he received more fan votes than starting guard Kemba Walker and got more media and fellow player votes than the other East guard starter, Atlanta’s Trae Young.

“It’s a joke that he’s not,” Spoelstra said about Butler. “Hopefully this will change things in the future.”

Reserves, voted on by the NBA’s head coaches, are not broken down by position. And when captains LeBron James and Giannis Antetokounmpo pick their teams on Feb. 6, they won’t be working within position parameters either.

But the starters are still decided by having players, fans and media vote from pools where candidates are grouped by position.

“I’m so confused by it,” Spoelstra said. “I just think it’s ridiculous that we’re still in these antiquated positions. So who’s to say what position Jimmy is? Does it matter? … These are such antiquated labels. I feel like we moved on from that years ago.”

“There (are) no positions and that’s the way the game should be played anyway, in my opinion,” Rivers said. “Fours, 3s, 2s, 1s, we just call them players. We don’t call them guards or forwards anymore. We just put them in spots and the more guys you can get to do multiple things, the better your team is.”

Rivers said he wasn’t even sure what the process is for choosing starters. When told the player vote plays a part in the process, Rivers expressed disbelief.

“That should stop,” Rivers said, amid laughter. “I’ll just say that up front. … Players are voting? Wow. I take the subs very seriously. I actually do because it’s important for some of the guys.”

Rivers added that he couldn’t believe that Antetokounmpo — who received more votes from players than anyone else in this year’s All-Star balloting — was snubbed by 32% of his own colleagues in the league.

“Guys vote for their friends and guys vote personal, too,” Rivers said. “That would be my guess.”