A year after Porzingis deal, things remain bleak for Knicks 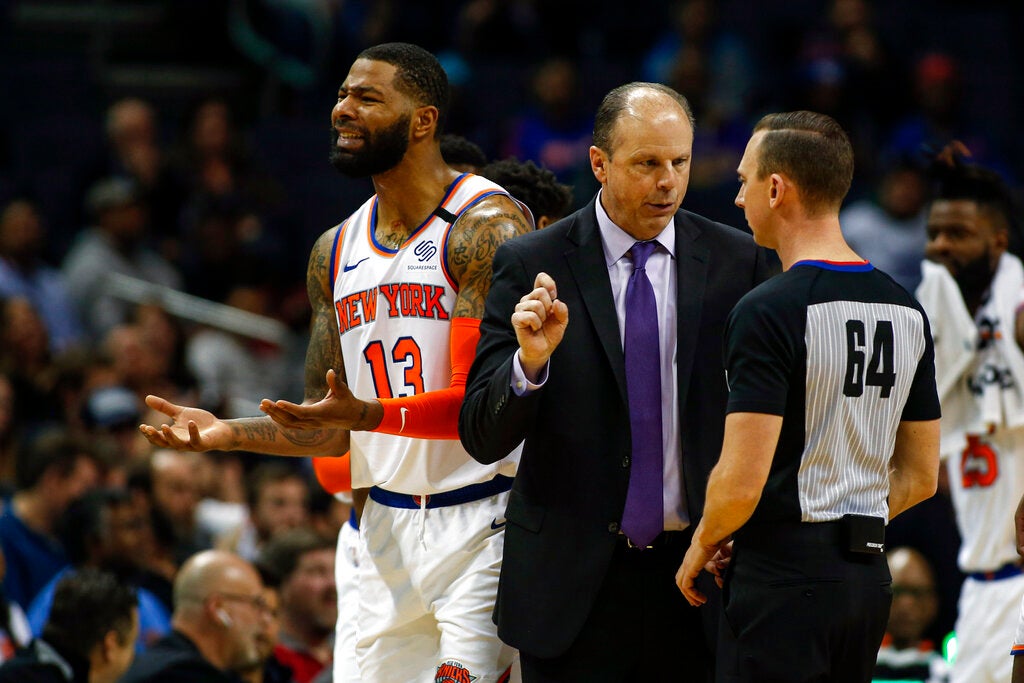 GREENBURGH, N.Y. — Marcus Morris talked tough in the preseason, when the New York Knicks made their annual boasts that things were going to be different.

He spoke softly Friday, apologizing for his misplaced machismo on another night the Knicks embarrassed themselves on the court and in the locker room.

Exactly a year after trading Kristaps Porzingis, it’s the same old basketball story in New York, nothing more than a rumored stop for superstars in the offseason, and the site of very little success in the regular season.

The latest low point was Wednesday, when the Memphis Grizzlies rolled to a 127-106 victory in a game that featured an altercation in the final minute after New York’s Elfrid Payton shoved Jae Crowder as he was attempting a shot, and frustrated fans chanted “Sell the team! “Sell the team!” with owner James Dolan sitting in his baseline seat.

Things got even worse afterward, when Payton said he’d do the same thing again and Morris mocked Crowder for playing with “female tendencies.”

Morris apologized on Twitter after the game and did so again after practice Friday.

“My comments were unnecessary and I wasn’t even thinking when I was talking,” he said in a brief statement, without taking questions.

“We have women referees, women coaches. I’m a big, huge supporter of the WNBA, I have a relationship with a few female players in the WNBA and if I offended any of them I deeply, deeply apologize.”

Payton was suspended one game by the NBA and will sit out against Indiana on Saturday. Morris was fined $35,000 for his actions during the scuffle and his comments afterward.

They were two of the veterans the Knicks signed in the summer and Morris vowed the team would play with toughness after a 17-65 finish last season. But shoving a player while he was in the air shooting wasn’t what the forward had in mind, nor was a 13-36 record that had the Knicks tied for last in the Eastern Conference.

Trading Porzingis to Dallas, Knicks leadership thought, could be the springboard to a transformation. The deal for the former All-Star cleared enough salary space to sign two top players, plus brought back two future first-round picks and a promising prospect in guard Dennis Smith Jr. Dolan touted the Knicks’ potential in a radio interview last spring, saying everything the team was hearing was that it was going to have a successful offseason.

But the Knicks missed out on Zion Williamson in the draft before Kevin Durant and Kyrie Irving chose Brooklyn over New York, leaving New York to assemble a class where only Morris and Julius Randle have been consistent contributors. Smith has been a massive disappointment this season, unable to unseat Payton as the starting point guard and not even outplaying Frank Ntilikina, who was taken one pick above him in the top 10 of the 2017 draft and has never even averaged 6 points in any of his three seasons.

It leaves the Knicks in a difficult situation going into the trade deadline next Thursday. They could try to move some veterans and leave the playing time to their young players, but they’ve learned in recent free agency failures that they need to win some games and show progress to have any hope of luring franchise talent.

There’s unlikely to be clarity from team president Steve Mills, who hasn’t spoken to reporters since he and general manager Scott Perry held an unusual press conference to express their disappointment after a Nov. 10 loss to Cleveland.

That’s left the spokesman duties to interim coach Mike Miller, who took over when David Fizdale was fired after a 4-18 start. Miller keeps things positive despite the bleakness, such as in his defense of Payton on Friday.

“And that’s probably what every team in the league is doing.”

As usual, most of them are doing it better than the Knicks.