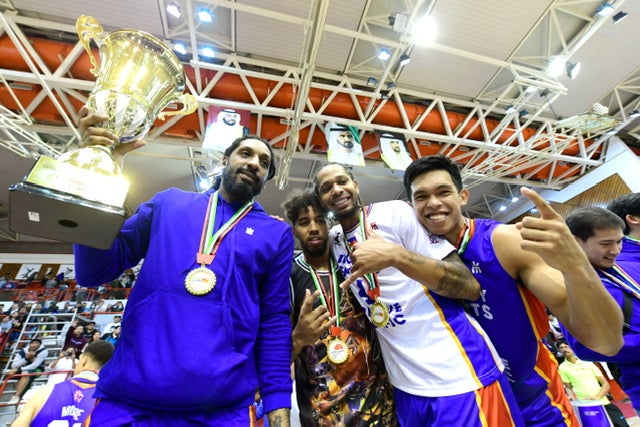 The Philippine side pulled off a perfect 7-0 campaign and became the first non-Middle Eastern team to rule the tournament.

“It’s great! It’s a great feeling as we made up for a heartbreaking loss in the semis last year, this year it feels nice,” said head coach Charles Tiu.

Renaldo Balkman recorded 25 points and nine rebounds while Andray Blatche notched another double-double with 21 points and 10 rebounds to lead Mighty Sports, which avenged its 84-89 loss to Al Riyadi in the semifinals last year.

Balkman was hailed MVP of the tournament after averaging 19.3 points and 7.3 rebounds per game.

Blatche, who also joined Balkman in the all-tournament squad, was also impressive all throughout as he registered double-digit points and rebounds every game.

Mighty Sports blew the game wide open in the third quarter after a tight first half.

Thirdy Ravena strung up five straight points to give Mighty a 68-51 lead off a three-pointer late in the pivotal third period.

Mighty has now won three titles in a span of four years after ruling the Jones Cup in Taiwan in 2016 and 2019.

“We are overjoyed with the team’s latest achievement, we never thought to win the event much more by a sweep despite the short time of preparation,” said team owner Alexander Wongchuking.

“Given another chance, we will continue to compete here or even in Taiwan just to give Filipino migrant workers a different entertainment,” added Wongchuking.