Christen Press rolls as US secures spot in Tokyo Olympics 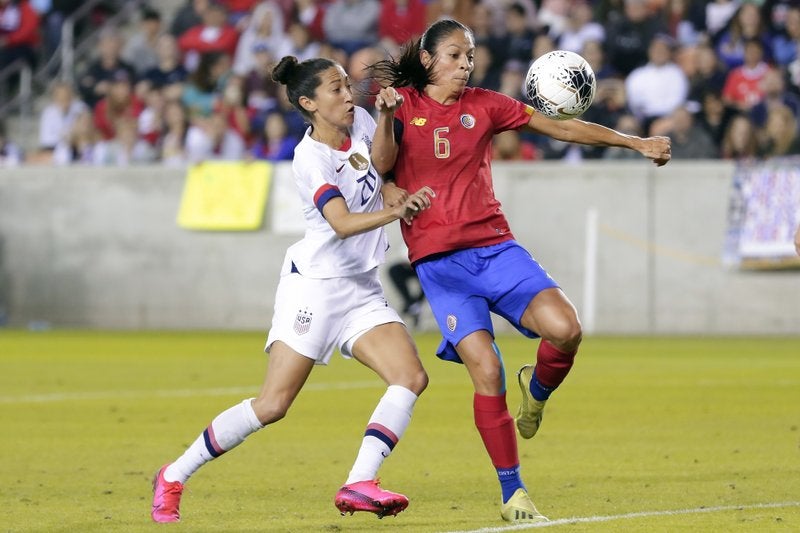 Costa Rica defender Carol Sanchez (6) pushes back on United States forward Christen Press (20) as she brings down the ball during the second half of a Concacaf women’s Olympic qualifying soccer match Monday, Feb. 3, 2020, in Houston. (AP Photo/Michael Wyke)

CARSON, Calif. — Christen Press is on a tear with goals in her past six games, focused on the U.S. national team’s next big task: the Olympics.

A longtime scoring threat, often as a spark off the bench, Press is making a case for a starting role with her latest outburst.

She is just the fifth U.S. woman to score in six straight games, joining Mia Hamm, Michelle Akers, April Heinrichs and Carli Lloyd. It’s the longest such streak for the U.S. since Lloyd scored in seven straight in 2014.

“I think the way I approach football always, and it’s been this way for a while, is just that my job is to strive to be my best when I’m on the field, and that’s every training and every game,” she said. “I’m happy to be helping the team and be on the field and doing what I love. It’s as simple as that.”

The United States is looking to become the first team to grab gold at the Olympics the year after winning the World Cup.

Four years ago in Brazil, the reigning World Cup champs looked unstoppable before they were knocked out by Sweden in the quarterfinals. It was the U.S. team’s earliest ever Olympic exit.

“We have to let go of the World Cup and we have to go into this like, you know, this is our big tournament for the next three years. And so I think that that’s a good lesson to have learned,” Press said. “I think having a new staff in the transition presents different challenges. But, you know, all of our eyes and all of our focus are on bringing home the gold.”

The United States qualified for the Tokyo Games on Friday night when it beat Mexico 4-0 in the semifinals of the CONCACAF Women’s Olympic Qualifying tournament. Press scored the final goal, a well-executed chip shot in the 73rd minute.

Canada claimed the region’s other Olympic berth with a 1-0 semifinal victory over Costa Rica.

With the Olympic spots secured, the United States will play Canada on Sunday in an essentially inconsequential title game. The U.S. has defeated Canada in the past three qualifying tournament finals.

Press has received more opportunities on the field as of late with the absence of Alex Morgan, who is on maternity leave. Morgan has said she’s going to try to be back in time for Tokyo.

Press also gets to make her case for a new staff: Vlatko Andonovski took over as coach after Jill Ellis stepped down last fall.

Andonovski, former coach of Reign FC of the National Women’s Soccer League, is well aware of Press, who currently plays for the Utah Royals.

“She’s doing very well, like you said she’s on fire, but I’ve always thought she’s a great player, it’s not like she’s just coming on fire now. Now she has more opportunity, “Andonovski said. “She’s doing well and penetrating on the dribble and the goals that she’s scored, I’ve seen Press score those goals in the league. I’m just glad she’s doing it for the national team as well.”

Press made her national team debut in 2013. She has 56 goals in 134 appearances. A standout at Stanford who won the MAC Hermann Trophy as the nation’s best college player as a senior, Press went on to play for clubs in Sweden in addition to her stints in the NWSL.

She has played in two World Cups, and Tokyo will be her second Olympics.

“My mindset is always is that there’s always more. So when people say `Oh, you’re at the top of your game,’ I don’t really like that expression, because it implies that from here you go down,” Press said. “What I want for myself and this team is to continue to ascend.”