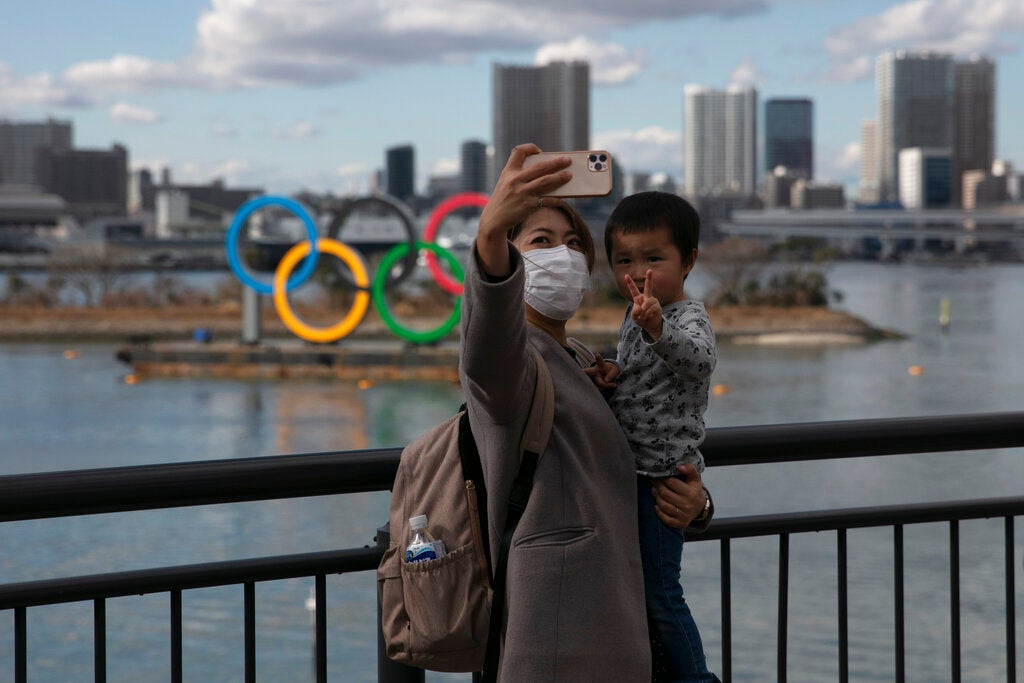 FILE – In this Wednesday, Jan. 29, 2020, file photo, a woman with a young boy takes a selfie with the Olympic rings, in Tokyo’s Odaiba district. Tokyo Olympic organizers are trying to shoot down rumors that this summer’s games might be canceled or postponed because of the spread of a new virus. (AP Photo/Jae C. Hong, File)

Olympic chiefs admitted Friday they face a “very big communications job” to soothe concerns over the coronavirus epidemic in the run-up to this summer’s Tokyo Games.

The head of the International Olympic Committee (IOC) coordination commission insisted there was no danger of Tokyo 2020 being canceled or moved, despite fears over the fast-spreading virus which has killed nearly 1,400 and infected around 64,000 — most of them in China.

But he said the IOC will send out information packs to reassure athletes that it’s safe to come into contact with competitors from China.

“The advice we have received from the World Health Organization (WHO) is that there is no case for a contingency plan to cancel or move the Games,” John Coates told reporters after a project review meeting.

“Certainly it’s a very big communications job that needs to be undertaken,” he added, noting that China is set to send more than 600 athletes to Tokyo.

“But we hear that most of the Chinese athletes are now out of China. I don’t know how many were to be involved in test events here, but I don’t see a problem if they’re coming from another country.”

Coates promised lessons would be learned from Rio four years ago, when concerns over the mosquito-born Zika virus led to several top athletes pulling out of the Olympics, including golfers Jason Day and Rory McIlroy.

“The WHO pointed out the likelihood of Zika being a problem at the time of the Games was very low,” he said.

“But we did lose some athletes — Jason Day’s wife was pregnant. We didn’t communicate the information well enough.”

Tokyo organizers have slammed “fake news” and scare-mongering over the coronavirus outbreak for causing panic ahead of the Games, which open on July 24.

More than 25 countries have confirmed cases of the flu-like disease, which the WHO has declared a global health emergency.

Japan, which registered its first fatality on Thursday of someone who had tested positive for the virus, is one of the worst-hit countries outside of mainland China.

There have been 33 cases on land and more than 200 positive tests of people quarantined on a cruise ship floating off Yokohama since last week.

Coates conceded that there could be fear among athletes about facing competitors from China.

“We did talk about that,” said the Australian.

“The IOC is going to ensure (information) kits are sent to all national committees to explain what’s happening around the world where Chinese athletes are competing,” he added.

“But I can confirm Tokyo 2020 remains on track,” insisted Coates, who revealed IOC president Thomas Bach will lay a wreath at the Hiroshima Peace Memorial Park on the sidelines of the May 19-20 executive project review.

The virus has already impacted sporting events in Asia, including Olympic qualifiers for boxing and basketball — both in China.

Formula One’s Shanghai Grand Prix, scheduled to take place in April, has been postponed with the inaugural Vietnamese Grand Prix also under threat.

Prime Minister Shinzo Abe’s government has come under fire for its handling of the infection, especially quarantine measures seen as too lax in the early stages of the epidemic.

“We don’t yet know who will be competing at test events so we can’t say anything for sure,” said Tokyo 2020 CEO Toshiro Muto, when pressed to specify measures being taken to tackle the epidemic.

“But we will have information from the qualifiers that are under way and take the necessary steps.”