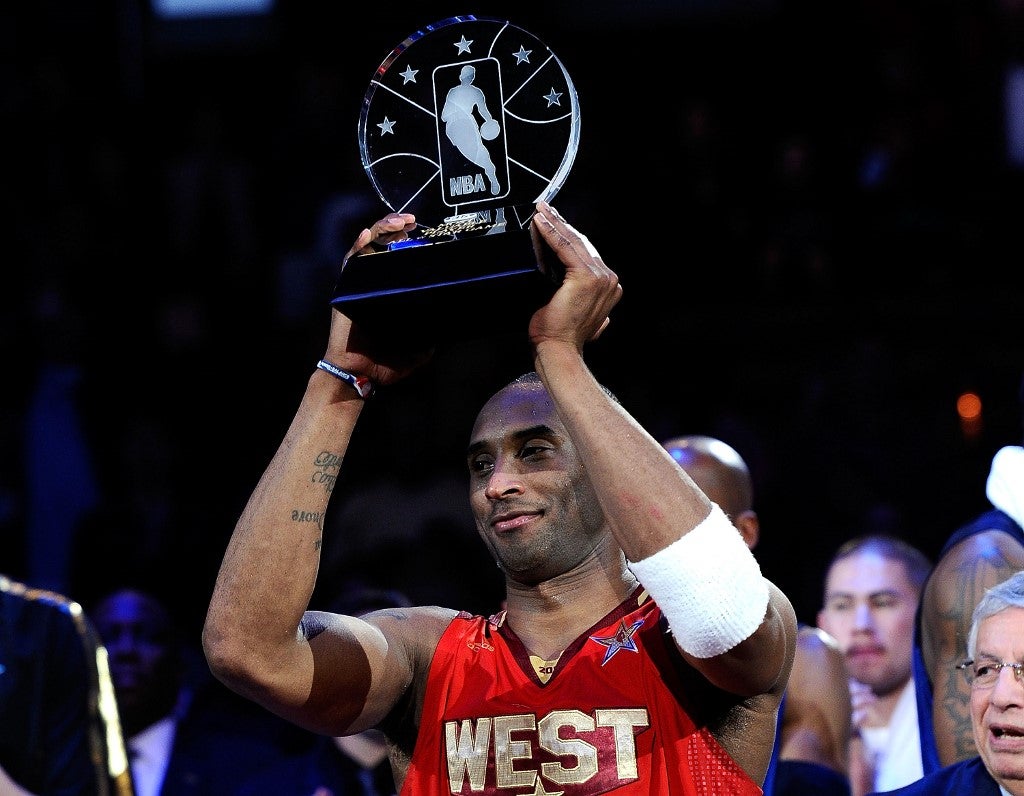 LOS ANGELES, CA – FEBRUARY 20: Kobe Bryant #24 of the Los Angeles Lakers and the Western Conference celebrates after being named MVP for the fourth time in the 2011 NBA All-Star Game at Staples Center on February 20, 2011 in Los Angeles, California. Kevork Djansezian/Getty Images/AFP

NBA commissioner Adam Silver announced Saturday that the All-Star Game MVP award will now be called the Kobe Bryant Award as players lined up to pay tribute to the late NBA icon.

“Kobe Bryant is synonymous with NBA all-star and embodies the spirit of this global celebration of our game,” Silver said. “He always relished the opportunity to compete with the best of the best and perform at the highest level for millions of fans around the world.”

Bryant and his daughter, Gigi, were buried in a private funeral service in southern California last week after they were among nine people who perished in a horrific helicopter crash on January 26.

The uniforms for Sunday’s all-star game in Chicago will also honour Bryant and his 13-year-old daughter with LeBron James’ team wearing the No. 2 for the basketball-playing Gigi and Giannis Antetokounmpo’s team wearing No. 24 in a tribute to Bryant.

Antetokounmpo was one of several all-stars also spoke Saturday about their memories and the legacy that Bryant left behind.

“The format is amazing,” Antetokounmpo said. “It makes you want to play hard and compete against one another. Each quarter you have the opportunity to win, and it makes it way more competitive.

“But wearing 24 and LeBron wearing number two, it’s a big honour. I wouldn’t want it any other way representing Kobe and Gigi in tomorrow night’s game.”

Antetokounmpo described the four-time All-Star Game MVP Bryant as the “Michael Jordan of our generation.”

“A guy that mentored me in the last few years of my career, a guy that was always there for me,” Antetokounmpo said. “In the regular season, the playoffs, a guy that told me that whenever I need something, I could just reach out to him, and he was literally always there. If I needed something, he would text me back, call me.

Boston Celtics guard Kemba Walker said this is an emotional time for the NBA family not only because of the death of Bryant, but also former commissioner David Stern, who passed away on New Year’s Day.

“With the tragic death of Kobe and Gigi and the rest of the families on the plane and David Stern, it’s definitely going to be a very emotional weekend, and we’re going to celebrate those guys and everyone else as best as we can,” said Walker.

“They meant so much to our game. They grew the game so much. We all just have a lot of respect for them.”

A public memorial service for Bryant will be held February 24 at Staples Center arena in downtown Los Angeles.