For NBA players, a little rest now before a hectic finish 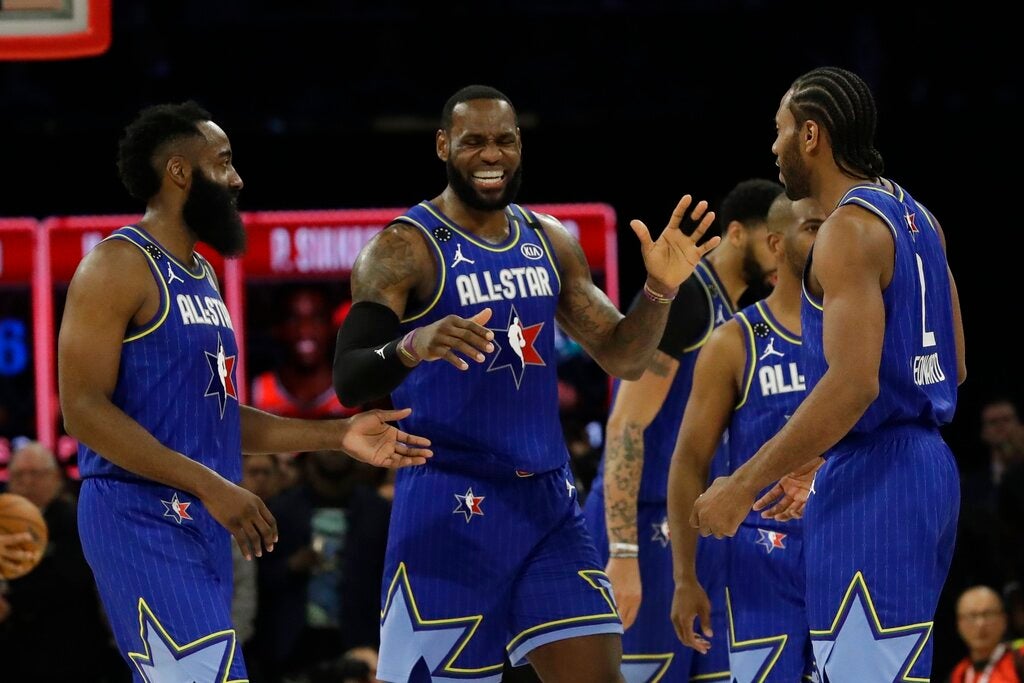 LeBron James of the Los Angeles Lakers celebrates with James Harden of the Houston Rockets and Kawhi Leonard of the Los Angeles Clippers during the second half of the NBA All-Star basketball game Sunday, Feb. 16, 2020, in Chicago. (AP Photo/Nam Huh)

CHICAGO — And now, they rest.

Until Thursday, anyway. That’s when the NBA comes back for a frantic eight-week sprint to the finish of the regular season, with teams having from anywhere between 25 and 29 games left to play before the 16-team field for the playoffs is filled and set.

The All-Star Game is over, Team LeBron defeating Team Giannis 157-155 in Chicago on Sunday night. Most players scurried onto private jets not long after the final buzzer for quick little getaways — places like Miami, Turks and Caicos, and the Bahamas (where some union meetings start Monday) were among the destinations.

So, the players will try to enjoy their last bit of relaxation as the playoff push is about to get real.

“Obviously, when you come to All-Star weekend, basketball is going to be the main thing and the main thing only,” Los Angeles Lakers star LeBron James said in Chicago. “That’s why you’re here. That’s what you see every day. We’re dedicated to this weekend for not only ourselves and our family, but for the fans. So, I try to find a couple days after All-Star, after Sunday, to kind of just get away from the game, try to freshen back up and get ready for the last run of the regular season.”

There are 12 teams that start Thursday: Milwaukee, Detroit, Miami, Atlanta, Brooklyn, Philadelphia, Charlotte, Chicago, Memphis, Sacramento, Houston and Golden State. Every other team resumes play Friday except for the Los Angeles Clippers, who get a couple extra days of break and won’t get back on the floor until Saturday afternoon.

For the most part, the postseason teams are largely set. Milwaukee could clinch a playoff berth as early as this coming weekend. The Bucks — 46-8 — are quietly on pace for the third-best regular season in NBA history. They’re seven games in the loss column ahead of Toronto in the race for No. 1 in the Eastern Conference, four losses clear of the Lakers in the race for the league’s best overall record.

“Our job is to take it, obviously, day by day,” said Bucks star Giannis Antetokounmpo, the NBA’s reigning MVP. “We want to win as many games as possible, but our goal is to win the whole thing. So obviously, as I said, you want to win every game. If you win every game, that would be great. But we cannot lose focus. We can’t lose track of our actual goal, which is get better every day, keep learning every day, and win the whole thing.”

Toronto, a team that many suspected would freefall after Kawhi Leonard and Danny Green left for the Los Angeles Clippers in free agency, hits the break with the NBA’s third-best record at 40-15. The Raptors, Boston, Miami, Philadelphia and Indiana can pretty much start making their East playoff plans. Out in the Western Conference, the Lakers, Denver, the Clippers, Utah, Houston, Oklahoma City and Dallas all have separated themselves in the playoff race as well.

That’s 13 teams for 16 spots. In the East, Brooklyn and Orlando will seek to hang on to the last two spots. Out West, No. 8 Memphis has a four-game lead on Portland and is five games up on San Antonio — a team that hasn’t missed the playoffs since 1997, but has some serious work to do in order to extend that streak.

“It feels good to be in a winning situation,” Lakers’ All-Star big man Anthony Davis said. “I think being No. 1 in the West, we have something good going over there in L.A. I’m excited about our team. I’m excited about our chemistry. I’m excited for the second half of the season and see what we can accomplish. We still have a lot to work on, but right now we’re doing pretty fine.”

Some of what to watch down the stretch of the NBA regular season:

If Memphis is going to hang on to its playoff spot in the West, it’ll have to survive what Tankathon — which charts such things — says is the toughest remaining schedule in the NBA. The Grizzlies still have two games left with the Lakers, Dallas, Houston and Toronto.

The easiest schedule, by the same calculation: New Orleans, which has Zion Williamson back and goes into the break 5 ½ games out of the No. 8 spot.

Golden State’s run of five straight appearances in the NBA Finals is almost certainly about to end — the Warriors are 16 ½ games out of a playoff spot with 27 games left, which means the mathematical chance of getting in still exists but is beyond slim.

But the Warriors expect to get Stephen Curry back from injury at some point in March, which if nothing else could get him some work before a potential Olympic appearance this summer and a return to what figures to be a back-to-normal Golden State operation next season.

Houston’s James Harden is well on his way to a third consecutive scoring title. If he gets there, he’ll join George Mikan, Neil Johnston, Wilt Chamberlain, George Gervin, Michael Jordan and Kevin Durant as the only players to win the title at least three straight times.

Harden is averaging 35.3 points per game, 5.3 points ahead of Antetokounmpo.

Here’s how wide a gap that really is: Assuming both players appear in all 28 of their remaining games, and Harden continues to score at his current clip, Antetokounmpo would have to average about 44.5 points per game the rest of the way to catch Harden for the title.

If the current playoff standings hold up, 12 teams — Milwaukee, Toronto, Philadelphia, Boston, Indiana, Brooklyn, Orlando, Denver, Houston, Utah, Oklahoma City and the Clippers — would be back in the postseason after also getting there last year.

The teams that would be in after not making it last year: the Lakers, Memphis, Dallas and Miami.

The teams that were in that would fall out: Detroit, San Antonio, Portland and Golden State.

Barring a big change, three of the four longest active playoff droughts in the NBA will continue this spring. Sacramento is in line to miss the playoffs for a 14th consecutive year, Phoenix for a 10th straight year and New York for a seventh straight season.

The Lakers have also missed six consecutive postseasons, a streak that will finally end in April.