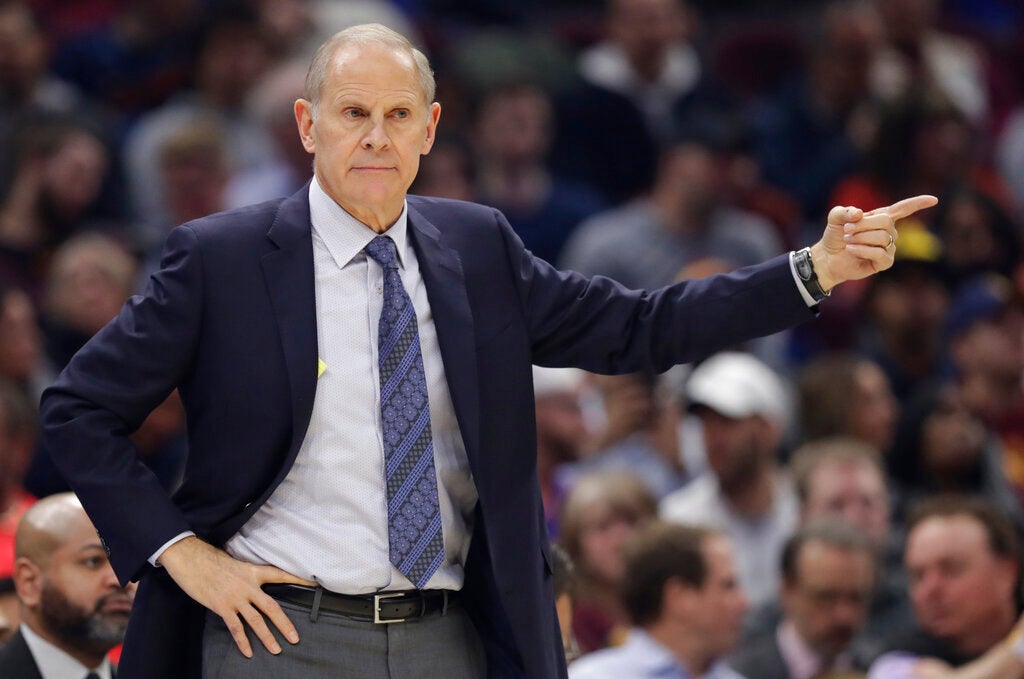 FILE – In this Friday, Dec. 20, 2019 file photo, Cleveland Cavaliers head coach John Beilein gives instructions to players in the first half of an NBA basketball game against the Memphis Grizzlies in Cleveland. Cavaliers first-year coach John Beilein will end a rough season by stepping down after 54 games, according to multiple reports Tuesday, Feb. 18, 2020.(AP Photo/Tony Dejak, File)

INDEPENDENCE, Ohio — John Beilein stood in front of the Cavaliers and emotionally explained why he’s leaving. This was goodbye.

But even on his way out, the admired coach gave his players one last lesson. He showed them honesty, dignity and vulnerability. He admitted the losing had beaten him.

Beilein said he couldn’t go on.

“It took a real man to do that today,” Cavs forward Kevin Love said. “Everybody you talk to will say they respected the hell out of him.”

One of college basketball’s most successful coaches over the past two decades, Beilein didn’t make it through one NBA season. He resigned Wednesday after just 54 games with the rebuilding Cavaliers, who can’t seem to find the right person to lead their team.

The 67-year-old Beilein never got comfortable during his short stint in the pros. The demands of travel, lack of practice time and a group of players who didn’t respond to his coaching style or respect him — until it was too late — proved to be too much, so he decided to move when the team returned from the All-Star break.

“This was a very difficult decision for me, but I want to be clear — this was my decision to step down and I truly appreciate the understanding and support of the front office during this time,” Beilein said in a statement released by the team. “I find losing very challenging and this year has taken a much bigger toll on me than I expected. I grew concerned for the consequences this toll could potentially take on my own health and my family’s well-being down the road.

“I was not certain I could be at my best for the remainder of the season and in the future.”

Before the Cavs officially announced his resignation, Beilein spoke to his players. Love described the coach’s actions as “ballsy” and the mood as “powerful.”

“For him to do come in and do that and look us all in the eye, and acknowledge that integrity and willingness, that’s big,” Love said. “That’s real man (stuff) right there. So I respect him for coming in and doing that because he didn’t have to.”

The Cavs went just 14-40 under Beilein, who surprisingly left Michigan after 12 seasons and signed a five-year contract last May. The team said he will be reassigned to a different role within the organization.

Associate head coach J.B. Bickerstaff is taking over Beilein and will attempt to put the pieces back together for the next 28 games — and beyond. The team is still working through some contract language for Bickerstaff, who took over teams in Memphis and Houston but is thankful not to have the “interim” tag on his title this time.

“This gives you an opportunity to make very difficult decisions without that same amount of weight that you have to face, where as an interim you’re fighting for your life,” he said. “This gives you a little bit of relief from that, and you can make harder decisions based on the long-term and not just the short-term.”

Almost from the start of training camp there were issues for Beilein in Cleveland. The Cavs didn’t embrace Beilein’s practice methods — he had his big men doing grade-school level fundamental “Mikan” drills — and players grumbled that he was treating them like kids and not paid professionals.

But what really hurt Beilein was the losing after so much success in college,

“He came in every day, he busted his ass, wanted to be better, wanted to change the culture,” Love said. “But sometimes, what do they say, ‘If you want to make God laugh, tell him your plans.’ Sometimes it doesn’t always shake out or work the way you want it to.”

Cavs general manager Koby Altman stood by Beilein throughout his tenure. But as the All-Star break approached, it became evident that a change was necessary in order to salvage a season that from the start was devoted to developing the Cavs’ core of young talent.

Beilein is not the first high-profile college coach to flop in the NBA. Kentucky’s John Calipari, Rick Pitino, Tim Floyd, Mike Montgomery and P.J. Carlesimo are among a group who found coaching at the highest level problematic.

“While it’s unexpected, we understand and respect his decision to step down as head coach of the Cavaliers,” Altman said. “I was excited about the development of our young players, who have all shown growth and maturity under coach Beilein. … The NBA is a unique business that sometimes requires aggressive risk-taking on important long-term decisions to move a franchise forward and ultimately compete for championships.”

While the Cavs didn’t make things easy on Beilein, he didn’t help himself, either. During a team meeting in Detroit, he inadvertently called his players “thugs” when reviewing game film. Beilein apologized, but the incident caused a larger wedge between him and the players.

It was hardly all Beilein’s fault. Some blame has to fall on the Cavs, who have had four coaches in the past two years.