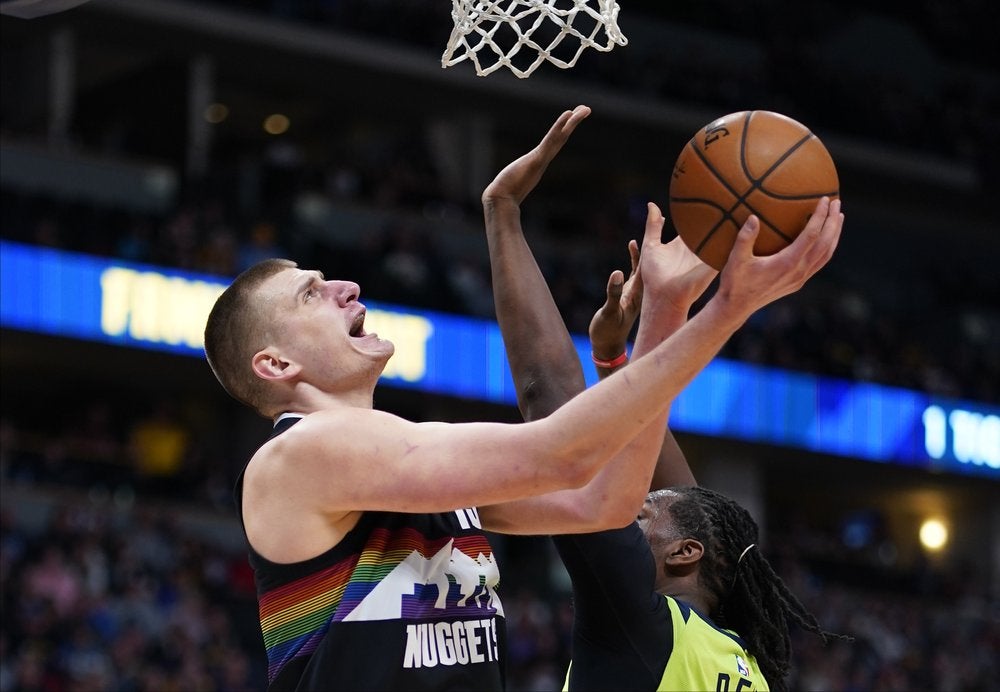 DENVER — Paul Millsap followed one of his worst games of the season with his best, thanks to extra film sessions.

Millsap scored a season-high 25 points on 9-of-11 shooting, and the Nuggets bounced back from their first loss in the Northwest Division to beat the Minnesota Timberwolves 128-116 on Sunday night.

Millsap had just two points in a 113-101 loss at Oklahoma City on Friday night but made a quick recovery. He hit his first six shots before missing with 54 seconds left in the first half.

“I watched a lot of film over the past few days, seeing how I can get better,” Millsap said. “I’ve been out of the lineup for a while so trying to get back in rhythm and figure things out.”

Nikola Jokic was nearly as sharp, making all six of his shots in the first half and going 11 of 14 from the field. He finished with 24 points and Jamal Murray had 19 on his 23rd birthday.

“I remember looking up at one point in the first quarter with like three minutes to go and we were shooting 100%,” Nuggets coach Michael Malone said. “I don’t know if it was good offense or no defense.”

The Timberwolves had only nine players available. D’Angelo Russell sat out for rest while Karl-Anthony Towns is out for at least two weeks with a hairline fracture in his left wrist. Kelan Martin had 19 of his career-high 21 points in the first half for Minnesota, which has lost 31 of its last 37.

It was the first game in Denver for Malik Beasley and Juancho Hernangomez since the Nuggets traded them, along with Jarred Vanderbilt, to Minnesota on Feb. 6.

“It was like practice, it was weird,” said Beasley, who finished with 17. “It was cool to be out there and compete with those guys because we had that brotherhood for four years, so it’s a weird feeling.”

Beasley had 12 points at halftime but scored just five in the second half and was talking with his former teammates throughout the game.

“For some guys, that’s how we were raised, talking trash (to) get me going a little more, get my juice flowing,” Nuggets guard Monte Morris said. “Malik’s one of the trash talkers. We knew coming in he was going to be talking a lot.”

Minnesota stayed with Denver despite the short rotation and led 60-56 midway through the second quarter before the Nuggets used a 15-3 run to take a 73-65 lead at halftime. They stretched it to a 10-point advantage after three and opened up a 106-91 lead early in the fourth.

The Timberwolves scored nine straight to get back into it but Denver went on a 22-2 run to put it away.

Timberwolves: The Nuggets showed a video tribute to Beasley, Hernangomez and Vanderbilt during a timeout in the first quarter. … F Allen Crabbe was out for personal reasons. … Saunders said he expects Russell to play Monday night at Dallas.

Nuggets: The 73 points in the first half were a season high. … Denver is now 10-1 against the Northwest Division. … Malone said rookie Michael Porter Jr. is not fully recovered from the right ankle injury that cost him the last six games before the All-Star break. “I think we have a locker room full of guys who aren’t 100 percent,” Malone said. “Who is at this point of the season?”

HELLO, MY NAME IS…

The Timberwolves overhauled their roster through a series of trades, leading to plenty of new faces on the team. Minnesota acquired nine different players in five trades, eight of those coming over in a 24-hour period ahead of the Feb. 6 trading deadline.

That influx of talent meant integrating players on the fly, so Saunders worked his team hard recently. That led to sitting Russell for Sunday’s loss.

“We have so many new guys we had almost a mid-February training camp for a day, day and a half,” he said. “Three heavy days and with a heavy game schedule this week tonight it was the plan for him to take it off.”