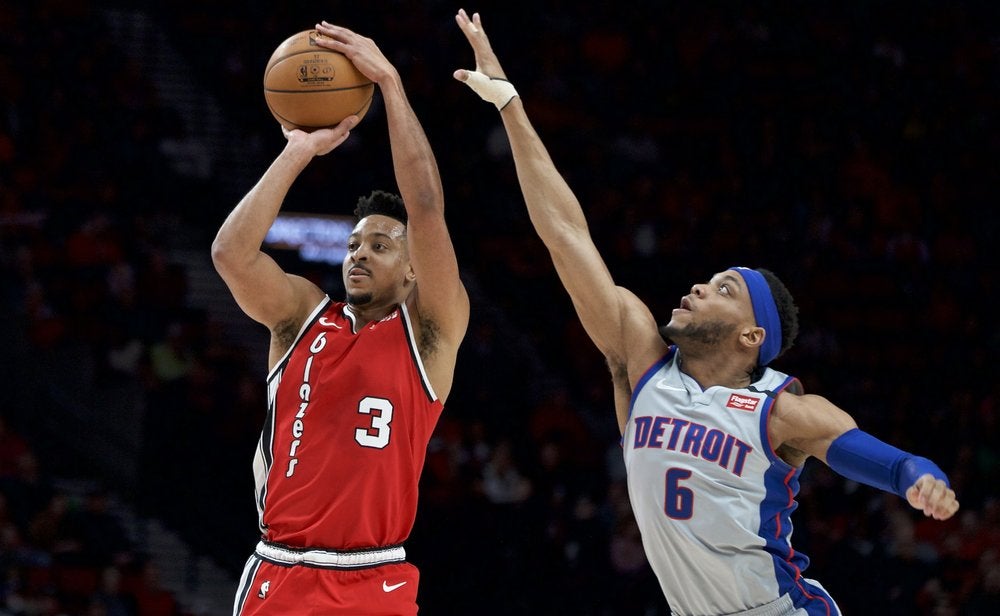 McCollum had 41 points, a career-high 12 assists and nine rebounds, Anthony scored a season-high 32 points and the Portland Trail Blazers rallied to beat the Detroit Pistons 107-104 on Sunday night.

“He led us tonight,” Anthony said of McCollum. “He came up big when we needed it, made the right plays, the shot was falling. He put us on his back tonight.”

It was the first time Anthony scored over 30 points since Feb. 25, 2017, when he was with the New York Knicks. He made a jumper with Portland protecting a two-point lead with 21 seconds left.

Anthony remained focused on the playoff fight his Blazers are in. With Portland four back in the loss column of eighth-place Memphis, Anthony knew it was up to he and McCollum to make sure the Blazers didn’t take a costly loss to the lowly Pistons.

“We don’t have a choice,” Anthony said. “We’ve got to go out there and do what we do to win games or put ourselves in position to win a basketball game. At the end of the day it’s going to come down to us too and saying this is what we got to do. This is the last quarter of the season and we in a dog fight trying to get that spot.”

Of the 27 points Portland scored in the fourth quarter, 21 came from Anthony and McCollum, who worked well together down the stretch.

“I’m very comfortable with that. I like low pick-and-rolls, side pick-and-rolls. Melo is good in isolation, he likes 15-foot jumpers,” McCollum said. “I know if I can turn the corner, then his man is going to be more hesitant to help. So it’s either I’m going to be finishing and he’s going to have opportunities to score. I think we played pretty well together and figure out ways to put the defense at a disadvantage.”

“He’s growing right before our eyes,” Pistons coach Dwane Casey said of Wood. “I love where he is, I love his progression but he’s not a finished product yet. Christian’s got to get stronger. This summer he’s got to get in the weight room and get stronger in his core together so he can take some bumps and hits and still score.”

McCollum scored or assisted on 14 consecutive Portland points in the first quarter and finished with 15 points and five assists in the period. The Blazers led 40-24, with Anthony adding 12 points.

A dunk by Wood gave the Pistons their first lead since their opening run at 45-43 with 5:36 left. Portland bounced back enough to hold a 53-51 lead at halftime after the Pistons outscored the Blazers 27-13 in the quarter.

Anthony continued his strong night in the third quarter, scoring 10 points and hitting a pair of 3-pointers but the Pistons would not relent. The Pistons scored 11 straight points in the final few minutes of the period to take a 10-point lead. McCollum scored seven straight points to close the quarter with Portland only down 85-80.

Pistons: Amid a barrage of changes to their roster, coach Dwane Casey has been tinkering with his starting shooting guard spot. For the past two games, he’s given Svi Mykhailiuk the start over Bruce Brown. But he still sees the spot being somewhat fluid, even though Mykhailiuk got his second straight start on Sunday. “It’s relaxed Bruce to come off the bench,” Casey said. ”He’s still going to get his minutes but again, we have had trouble scoring to start the games. And that’s a reason why Svi has been in there.”

Trail Blazers: Despite their disappointing 128-115 loss to the New Orleans Pelicans on Friday, Blazers coach Terry Stotts liked what he saw from his squad particularly in the second half. “ We did improve our transition defense and our defensive rebounding,” Stotts said.