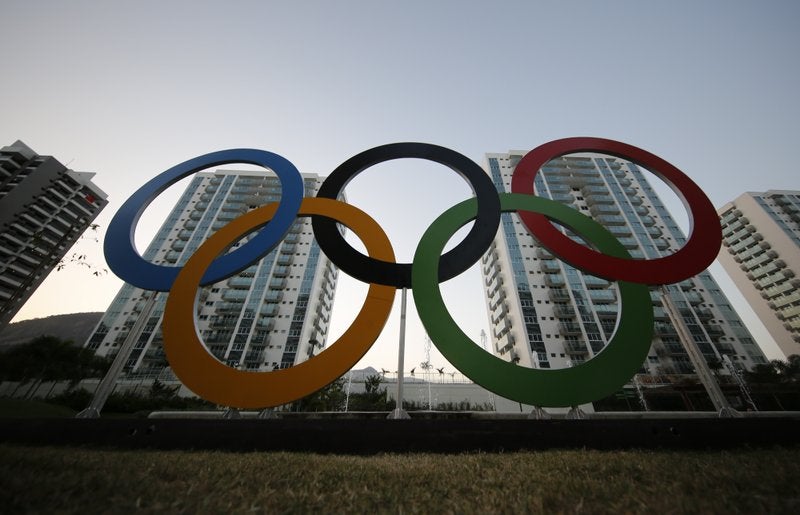 FILE – In this July 23, 2016, file photo, a representation of the Olympic rings are displayed in the Olympic Village in Rio de Janeiro, Brazil. An eye-opening survey finds that the majority of elite and Olympic athletes struggle to make ends meet. 58 percent of the 491 respondents from across the globe said they did not consider themselves financially stable. (AP Photo/Leo Correa, File)

The comments could easily have come from any middle-class town where workers have trouble making ends meet: “No pension plan, no chance of structural income over a longer period of time.” … “I will not have savings until the mortgage of my house is paid off.” … “My parents still have to help me pay for my food.”

In this case, however, the tales of financial struggle come from some of the best athletes in the world.

In a survey of nearly 500 elite athletes spread across 48 countries, many of them gearing up for the Olympics later this year, an athletes’ rights group found that 58% said they did not consider themselves financially stable.

Even greater majorities said they did not receive “the appropriate amount of financial compensation” from the International Olympic Committee or the national federations that send them to the games and other major events.

And 57% answered “Yes” when asked if the IOC should pay athletes to attend its events.

Over the last year, the advocacy group Global Athlete received responses from 491 athletes spread across six continents, about 200 of whom identified themselves as Olympians or Paralympians, and the rest of whom compete at an elite level in their country or at an international level. The responses painted one of the most thorough pictures of the long-documented reality of competing at the highest levels of Olympic sports: Hardly anyone gets rich, while the majority are poor and largely beholden to the bureaucracies that fund this diverse cross-section of what are, by and large, niche sports.

As part of the survey, athletes who said they did not consider themselves financially secure were given the chance to explain. There were 89 responses, most of which sounded similar themes:

—“Can’t train without funds but trying to get work around training is not easy and continually told if you miss sessions you don’t get selected.”

—“No stable job, living off casual work, and supported by my mum. My sport provides no money for me.”

—“Paycheck depends on how I preform at a major championships once every 2-4 years. If I do not preform well in one moment I cannot financially support myself.”

Last year, sparked in part by a ruling from a German court, the IOC allowed national Olympic committees to relax guidelines on what’s known as Rule 40 — a rule that restricts athletes from fully cashing in on their marketing potential while the Olympics are ongoing. A handful of countries made changes. But were they enough? Four out of five athletes in the survey agreed that they should be given the right to “build and sell their own image right at the Olympic Games,” which is often the only time many of them will have such a massive platform.

The IOC and its affiliates have long argued that they need an uncluttered advertising space, especially during the games, to preserve the value of Olympic sponsorships, which, in turn, allows them to provide the huge stage on which the athletes compete. That reality wasn’t lost on many of the 111 athletes who responded when asked for comments about how to gain control of their brand during the Olympics.

One example: “Loosening of rule 40 … but not 100% free exposure as the money IOC get from their sponsors aids the smaller sports over the following 4 years.”

But the reasons for the financial instability goes deeper than Rule 40. It speaks to issues involving training stipends, living expenses, insurance and post-career opportunities. Dozens of stories circulate in Olympic years about athletes holding bake sales and starting GoFundMe pages to make ends meet. Many national federations have tried to improve conditions for their athletes in all these areas, but according to those surveyed, they’ve largely fallen short.

The Olympics and its affiliated sports hold a particularly unique leverage over athletes, when compared to many professional sports and leagues. They run the biggest, most prestigious event in the world, while the thousands of athletes spread across dozens of countries have struggled to band together to speak with one voice. It often leaves the athletes, without whom there would be no Olympics, in the position of taking what they’re given, without much chance to negotiate.

Athletes were also asked a series of questions about whether they are well-represented on the multitude of boards and committees that make decisions about Olympics sports across the globe.

Eighty-seven percent said “Yes” when asked if they thought athletes should have at least half the votes within sports organizations when rules that affect them are being developed. It’s not an uncommon formula in sports leagues such as the NFL and Major League Baseball where the players unions hold great sway. But in the Olympic space, it’s a far-fetched notion. For instance, the U.S. Olympic and Paralympic Committee, under scrutiny about this very issue, recently rewrote bylaws to bring athlete representation up to 33% on most of its governing bodies.

Athletes also answered a series of questions about their general welfare in the international sports system. Majorities said their rights were respected by organizations ranging from the IOC to their national Olympic federations.

But when it came to specifics — for instance, whether they received appropriate care in areas of mental health, post-career transitions and ongoing medical care (both during and after their careers) — a plurality of athletes answered “No” in every instance.

Not all the responses were negative. Of the 42% of athletes who said they considered themselves financially stable, 66 filled out the comments section to explain why. Despite the more positive outlooks in these answers, most were sprinkled with reminders of the reality of being an elite athlete in sports that only hit the big stage once every four years.

—“Have a good understanding of how to budget and started investing money once I became an athlete. The athlete salary is not high so I started saving.”

—“My own perseverance to have a great career after sport.”