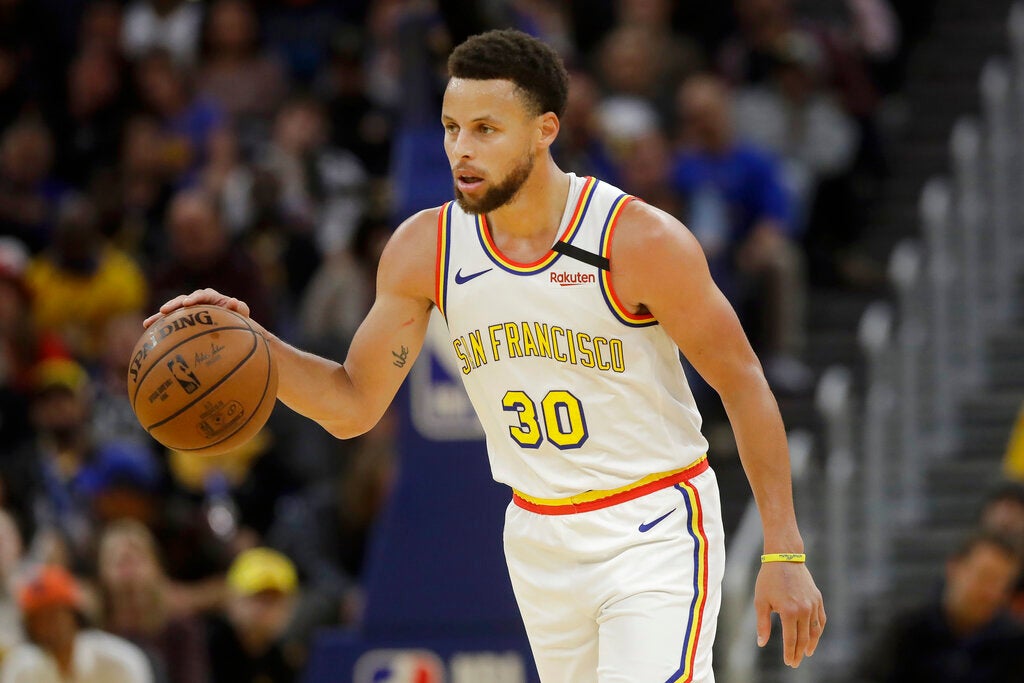 Golden State Warriors guard Stephen Curry (30) dribbles the ball up the court against the Toronto Raptors during the second half of an NBA basketball game in San Francisco, Thursday, March 5, 2020. (AP Photo/Jeff Chiu)

Golden State Warriors star guard Stephen Curry, returning to the NBA after four months with a broken left hand, said Thursday he still wants to play at the Tokyo Olympics.

Two-time NBA Most Valuable Player Curry, cleared to play Wednesday by doctors, has missed 58 games since falling on his hand and breaking it on October 30 against Phoenix.

Curry, who helped the US squad to unbeaten world championship runs in 2010 and 2014, was among 44 finalists for the United States Olympic squad announced last month by USA Basketball.

Three-time NBA champion Curry, who withdrew his name from 2016 Rio Olympic consideration due to lingering ankle and knee injuries, would be done in mid-April for the NBA-worst Warriors, giving him ample time before the US squad gathers after the NBA Finals in mid-June ahead of the Japan Games, which begin July 24.

“There’s a lot of time before now and then, but I’ve always had that on my radar,” Curry said of the Olympics.

“It wasn’t really a thought until recently when I’m getting back to where I’m ready to play.”

“Right now the focus, obviously, is just trying to stay healthy these last 20 games, get my rhythm back, get to the level of basketball I know I’m capable of playing,” Curry said.

“You kind of understand what the schedule looks like leading up to July when training camp in Vegas starts, but that’s still the goal.”

“I feel like the first day of school all over again, which is exciting,” Curry said. “I feel pretty comfortable, pretty confident, with where I am physically.”

Curry said he had set a goal of returning around March 1 and even though he missed it by a few days, he’s confident his hand is ready for him to show the 3-point sharpshooting form that made him a superstar.

“With all the different circumstances of trying to get my conditioning, my rhythm and make sure my hand’s been through enough competitive, tough situations where I know how it’ll respond, it took this long to heal,” Curry said. “We didn’t rush, and we weren’t overly conservative.”

Curry, who turns 32 next week, wasn’t wanting a limited return or worries about using him in games on consecutive nights.

“We had talks about back to backs, whether that’s in play or not,” Curry said. “When I come back I want it to be all the way back and not have that kind of ‘now you see me now you don’t’ type of vibe.

“That’s why I had all these check points to get through to be cleared to play. I want to be out there every night and finish out the year strong.”