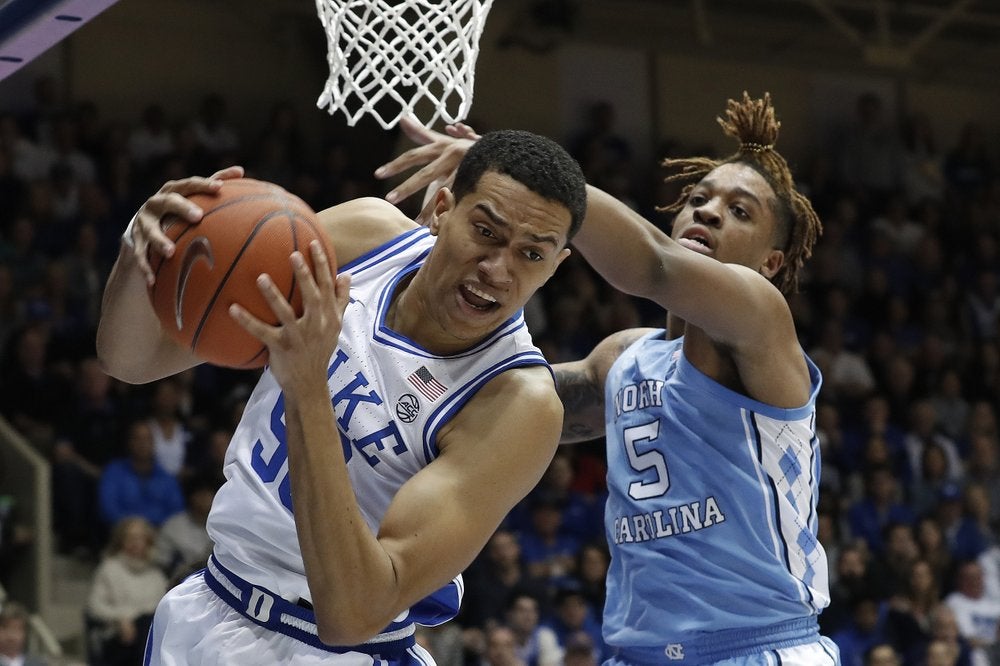 The Blue Devils took care of the Tar Heels with a strong start-to-finish performance — with the only unexpected part being the jolt coming from graduate reserve Justin Robinson.

Carey had 25 points and 10 rebounds to lead the Blue Devils past the Tar Heels 89-76 in Saturday’s regular-season finale, capping a game in which Duke never trailed and played a steady game after inconsistent stretches in recent weeks.

“We actually played even better than what we practiced,” Duke coach Mike Krzyzewski said.

Sure, Carey was dominant inside, while Jones (21 points) and Cassius Stanley (19) turned in their own big outputs. Yet a big piece of Duke’s success was due to Robinson — the son of retired NBA great David Robinson and a former walk-on — having his latest productive outing in what is turning into a growing reserve role.

Robinson matched career highs with 13 points and six rebounds to go with a career-best four blocks for the Blue Devils (25-6, 15-5 Atlantic Coast Conference), including sparking the game-clinching 8-0 run when Duke finally broke free of the Tar Heels (13-18, 6-14).

“I’m approaching practice the same way, pregame always the same,” Robinson said. “You just have to have confidence, know what you can do and come out with energy.”

This was a rematch of last month’s overtime classic won by the Blue Devils after two buzzer-beating shots — the first by Jones to force overtime, the second a winning putback by Wendell Moore Jr.

This one didn’t have the same highlight-reel drama, but still was a tough rivalry fight. The Blue Devils led by 10 late in the first half, but the Tar Heels hung around and twice got within a point in the second half.

“They’re a really good team and we were right there at one point,” said senior Brandon Robinson, who left briefly after being hit in the mouth but returned to finish with 11 points. “We just didn’t make the plays … we just couldn’t get over the hump when they got that lead.”

With Duke up 72-67, the 6-foot-9 forward hit Carey inside for a dunk, then came up with a key block of Brooks in the paint at the other end. Moments later, he took a crosscourt feed from Tre Jones and launched a 3 to beat the shot clock that swished through the net and sent Cameron Indoor Stadium into a frenzy.

Stanley followed with a 3-pointer — fittingly, assisted by Robinson — that pushed Duke to its largest lead at 80-67 with 3:47 to play. The Tar Heels didn’t get it back to single digits again.

UNC: The Tar Heels had managed to salvage some late-season momentum in a year thrown into disarray amid injuries and close losses, entering this one with their first three-game winning streak since starting 5-0 in November. But this loss dropped them into a tie with Pittsburgh and Wake Forest for last place — UNC’s first bottom-of-the-league finish since tying for the spot during the 8-20 season of 2002.

“It’s frustrating,” UNC coach Roy Williams said, “but it’s what it’s been quite a bit of this season.”

Duke: The Blue Devils’ seed for the ACC Tournament was set at No. 4 once No. 22 Virginia beat No. 10 Louisville — Duke lost to both in the only regular-season meetings — in a game that ended as this one got going. The Blue Devils head into the postseason with some bounce, and Robinson is suddenly looking like a viable bench option.

“Justin Robinson has been a godsend for us,” Krzyzewski said. “He had his fingerprints on every aspect of the game tonight.”

Robinson’s father, known as “The Admiral” during an all-star career that included two NBA championships, couldn’t hold back a huge smile after his son’s final game at Cameron.

“He seems like he’s having fun,” Robinson said. “Coach K and his staff have been patient and really worked with him a lot, gotten him bigger and stronger. And I couldn’t be happier. He seems like he’s in a good place.”

UNC: The Tar Heels play Virginia Tech in Tuesday’s first round of the ACC Tournament.

Duke: The Blue Devils have a double bye into Thursday’s quarterfinals at the ACC Tournament.