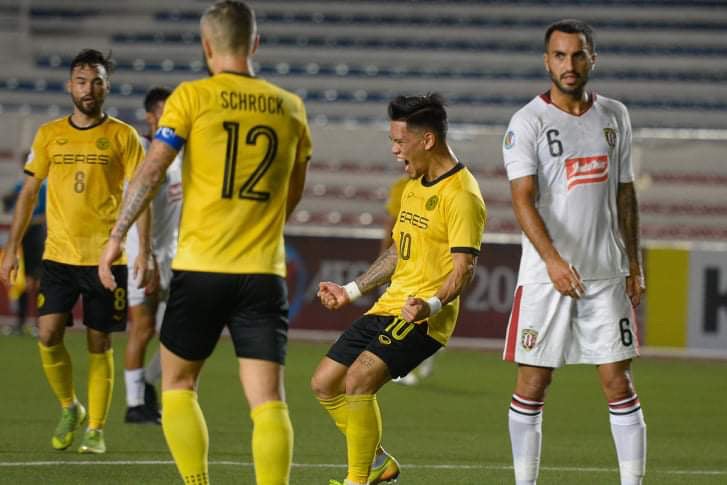 The Busmen prevailed in the battle of league champions as they dumped Bali United of Indonesia, 4-0, Wednesday night to keep top spot in Group G of the AFC Cup at Rizal Memorial Stadium.

Bienve Marañon bagged a second half brace after OJ Porteria opened the scoring, while Robert Lopez Mendy finally found the back of the net late on as Ceres stayed unbeaten in three matches, jacking up its tally to seven points.

With three away matches coming up, the Busmen seem primed to reach the knockout stage for the fourth straight season. Than Quang Ninh drubbed Svay Rieng of Cambodia, 4-1, in the other Group G match which also meant the Vietnamese side moved up to second spot with four points after the first round of matches.

Ceres had to play its match without spectators in line with a government directive that came after growing concerns on the spread of the corona virus (Covid 19) in Metro Manila.

Bali set out to stop Ceres’ high powered attack that has already netted six goals from the first two matches. But the visitors’ defense was finally unlocked in the 35th minute by captain Stephan Schrock’s penetrating run into the area. The initial effort by Schrock was parried away by Nadeo Winata only to the path of Porteria who smashed the ball into the back of the net.

Seven minutes after the restart, Ceres doubled the lead with Marañon scoring from the penalty spot after Schrock was fouled by Willian Pacheco. Marañon made it 3-0 with a header off Schrock’s corner in the 63rd minute before Mendy finally opened his AFC Cup account with a clinical strike 10 minutes later.

It was Bali’s second straight defeat putting the Indonesian champions at third spot in the group. Only the top team from each of the three Asean zone groups will make the knockout round. The best second placed squad from the three groups will complete the semifinal cast in the Asean zone.