Networks get through first weekend with taped programming 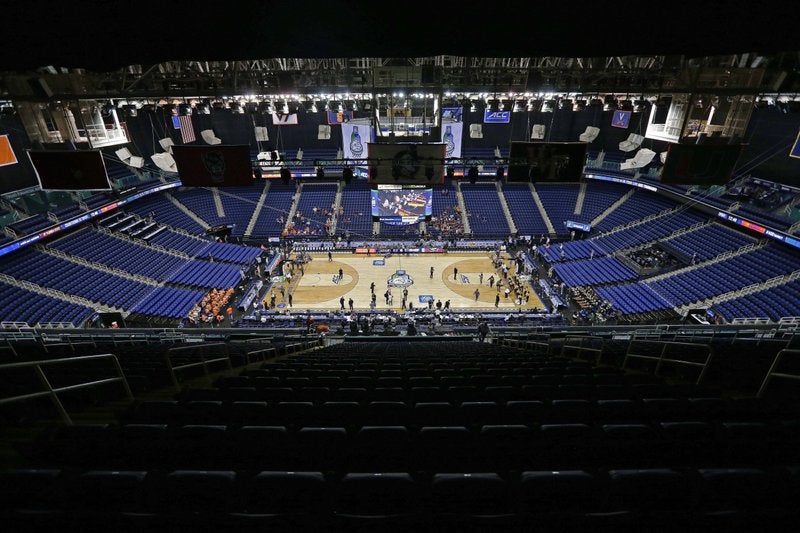 Greensboro Coliseum is mostly empty after the NCAA college basketball games were cancelled at the Atlantic Coast Conference tournament in Greensboro, N.C., Thursday, March 12, 2020. The biggest conferences in college sports all canceled their basketball tournaments because of the new coronavirus, seemingly putting the NCAA Tournament in doubt. (AP Photo/Gerry Broome)

Scott Van Pelt was supposed to be breaking down the NCAA Tournament bracket on a busy Sunday night on ESPN’s “SportsCenter.”

Instead, Van Pelt was figuring out how to fill most of the hour with the sports world on hold because of the spread of the coronavirus.

“I have no idea. Right now having a rundown is a bit pointless,” Van Pelt said. “It’s like changing recipes on the fly. Are we making cookies? No, making something entirely different. I don’t know what else can be cancelled on our watch. It’s been quite a week.”

Van Pelt was supposed to be doing halftime segments during last Wednesday’s NBA games. What ended up happening was Van Pelt updating viewers about the NBA season as well as providing interviews and analysis once the New Orleans Pelicans’ game at the Sacramento Kings was postponed.

Van Pelt and ESPN weren’t the only ones having to scramble to fill programming. CBS aired championship games from past Big Ten and Atlantic 10 tournaments on Saturday and Sunday. During the hour that CBS was supposed to be showing the tournament selections, viewers in New York saw the news while Los Angeles aired an infomercial.

NBC and Golf Channel showed the final two rounds of last year’s Players Championship after the PGA Tour canceled the final three rounds Friday. Fox left it up to their affiliates to program the gap left by the cancellation of Sunday’s NASCAR race in Atlanta and NBCSN re-aired last year’s IndyCar season opener.

ESPN at least had some live programming on Saturday with a UFC card from Brazil. Sunday was mostly films from the “30 for 30” series while ESPN2 re-aired some of the top college basketball games from the season. On Saturday they showed the entire “BasketballL A Love Story” series.

ABC also showed “30 for 30” films as well as a couple episodes from the “College Football 150” series. FS1 and FS2 had a mix of college basketball and XFL re-airs.

Whether that remains the template for future weekends remains to be seen.

Van Pelt said the early plan for Sunday’s “SportsCenter” included analyzing players approving the NFL’s collective bargaining agreement as well as any signings that took place. He was also planning to interview Penn State senior forward Lamar Stevens on seeing his season end abruptly when the Nittany Lions appeared to be headed to March Madness.

At first, Van Pelt wondered why the NCAA wouldn’t release a bracket but then saw the reason, saying “it would be like what you would have gotten for Christmas and Christmas is cancelled.”

Van Pelt is trying not to look ahead because the situation can change on a dime and because it can be an unsettling feeling. He has received texts and calls from friends, family and athletes wondering the same thing as he is — what type of show are they going to do?

One thing that Van Pelt is planning on doing is showcasing those who have had their seasons cut short. He sent out a tweet on Friday asking people to nominate high school and college seniors to spotlight.

“In the absence of live content, we can do storytelling and acknowledge those who we know are out there that had their season end. There are quite a few people that we can shine a light on,” he said. “Right now I’m just focusing on tonight’s show. We have a lot of smart people who can figure out a lot of different things. I don’t know how anyone can plan for eventualities not knowing what the end game is.”

Read Next
NBA, sports shutdown could go much longer
EDITORS' PICK
Geek out at TOYCON 2022 powered by Smart Signature
Unemployment rate up to 6% in May
High-risk pregnancy: Reducing your risk is in your hands
UK’s Boris Johnson will resign, BBC reports
High inflation: Your P1 is now worth only 87 centavos
House energy committee chair Arroyo bats for cheap electricity
MOST READ
Suspect in grisly killing of missing woman in Bulacan arrested
Hong Kong suspends flight bans as it eases COVID-19 rules
Kim Atienza’s daughter flaunts bikini body in response to critics of her ‘revealing photos’
Cop slain in Isabela ambush
Don't miss out on the latest news and information.