UEFA postpones Euro 2020 by 1 year because of pandemic 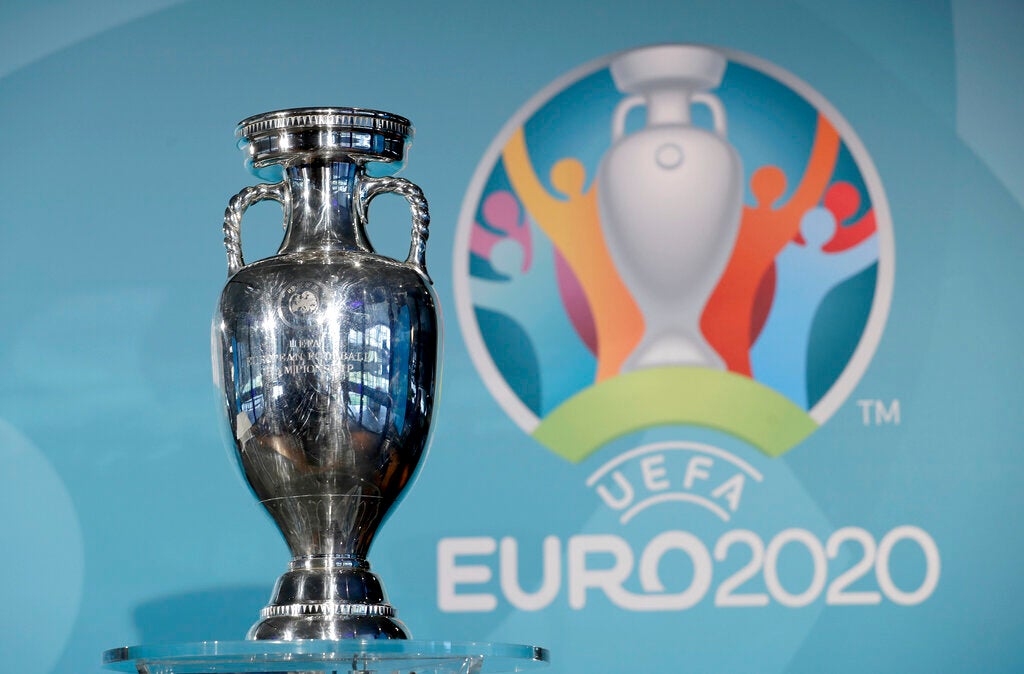 FILE – In this Thursday, Oct. 27, 2016 file photo the Euro soccer championships trophy is seen in front of the logo during the presentation of Munich’s logo as one of the host cities of the Euro 2020 European soccer championships in Munich, Germany. UEFA, are set to make a final decision when the UEFA executive committee meets on Tuesday March 17, 2020 after talks with clubs and leagues, about possibly delaying the Euro 2020 soccer tournament by a year as the continent grapples with the outbreak of the coronavirus. (AP Photo/Matthias Schrader, File)

GENEVA— Taking a tough decision that became more inevitable by the day, the governing body of European football postponed its marquee championship for one year on Tuesday.

Euro 2020 became Euro 2021 in a major shift for an international football calendar that is on lockdown because of the coronavirus outbreak and with no clear end in sight.

The tournament that was due to open on June 12 in Rome is now scheduled for next year from June 11 to July 11, in the same 12 host nations.

It is far from clear when the public health crisis could ease enough for European football to resume. Still, taking Euro 2020 off the calendar clears valuable weeks in June when domestic leagues and cups, and the Champions League and Europa League, could be completed.

“We think postponing the Euro is the only (way) to get a chance to the national leagues and to all the club competitions to finish,” Ceferin said.

The UEFA executive committee made the decision after hosting a video conference call with its 55 national member federations.

The European Championship final typically attracts a broadcast audience of 300 million worldwide and the 51-game tournament made UEFA a profit of 830 million euros ($912 million) four years ago.

“Moving Euro 2020 comes at a huge cost for UEFA,” Ceferin said in a statement.

In a later interview with The Associated Press, Ceferin estimated the cost of postponing the tournament at “hundreds of millions” of euros (dollars). UEFA reported reserves of 574.8 million euros ($632 million) in its annual accounts published this month.

Tuesday’s decision was taken after intense talks with UEFA’s member and the leaders of European club football.

Euro 2020 was scheduled to be played in a dozen countries from Ireland to Azerbaijan, and Russia to Italy. A one-year postponement became UEFA’s favored option last week.

“The health of all those involved in the game is the priority, as well as to avoid placing any unnecessary pressure on national public services involved in staging matches,” UEFA said.

The freeze on games amid the pandemic has also put broadcasting deals worth hundreds of millions of dollars on hold and could lead to the 2019-20 season being annulled in some competitions.

UEFA’s first call on Tuesday was with leaders of the European Club Association and European Leagues groups, plus the FIFPro players’ union.

Completing domestic league seasons would allow titles to be awarded and decide entries for the next Champions League and Europa League. The first qualifying games are already scheduled for late June.

If resuming the season is possible, UEFA’s options to complete this season include playing the quarterfinals and semifinals as single games instead of over two legs where each team has a home match.

One option, revealed by the Polish football federation, is for Champions League games to take the most attractive weekend slots, while domestic leagues play midweek.

The Champions League final is scheduled for May 30 in Istanbul, but the Turkish city could also be asked host the semifinals in a mini-tournament at a later date. The likely last available date to play the final is June 27.

Also, 16 of UEFA’s members are involved in the Euro 2020 playoffs, which were scheduled to be played on March 26 and 31. They will decide the last four entries in the 24-nation final tournament, and could now be played in early June.

Postponing Euro 2020 has also created a backlog of national team games in a packed calendar managed by FIFA.

In a coordinated move, UEFA was followed Tuesday by South American football body CONMEBOL, which postponed the Copa America one year to the same playing dates.

Lionel Messi and Neymar would now be cleared to play for their European clubs if games resume this season.

June 2021 was occupied by the UEFA Nations League final tournament of four teams, plus the start of FIFA’s inaugural 24-team Club World Cup. It is due to be hosted in China and feature eight European clubs but no broadcasting or sponsor deals have yet been announced.

“I would like to thank FIFA and its president, Gianni Infantino, who has indicated it will do whatever is required to make this new calendar work,” Ceferin said.

In a FIFA statement, Infantino said he was ready to ask China’s government and football federation to accept a delay of the Club World Cup. That means the tournament could be played later in 2021, or in either of the next two years.

“Particularly in football, finding appropriate and fair solutions at global level is imperative,” said Infantino, who will propose the changes in a call Wednesday with a panel of his vice presidents.

Qualifying games for the 2022 World Cup in Qatar are also scheduled for June 2021 in most European countries. There is currently no space in the calendar to reschedule all those games, and a reduced qualifying program will likely have to be considered.

However, any cuts in national team matches will impact member federations’ revenue and centralized broadcasting deals managed by UEFA.

Infantino said new dates for national-team games affected by the pandemic could be published at the end of April.